Thoughts For Obama On His Walk In China; A New Pacific Strategy 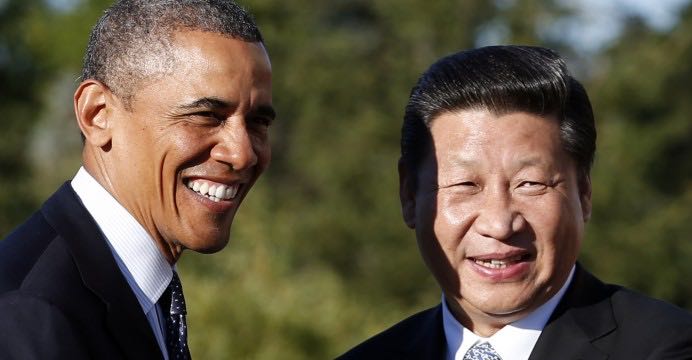 WASHINGTON: President Barack Obama and Chinese President Xi Jinping will spend most of Tuesday together, even going for one of those famous walks to be followed by dinner.

I’m hoping that Obama’s aides have read a new book by my colleague Robert Haddick, formerly of Small Wars Journal, on what strategy we should adopt for the Pacific and why.

“Fearful of enabling a conflict over which they would could lose control, US diplomats are standing aside while China increasingly bullies its small neighbors over its territorial claims,” Robert writes in the introduction to “Fire On The Water: China America, and the Future of the Pacific.” The US, he argues, needs “a new diplomatic approach” in the region if it is to succeed in adroitly managing both its obligations and China’s impressive rise.

It may be difficult for Obama to take a new tack toward China after last week’s elections, or at least that’s what the Chinese seem to think. The Chinese press, who clearly do not understand the difference between a parliamentary system and our more complex three-sided box, have been making triumphal noises as the president wends his way to Beijing. Look, they say. Obama’s party got smashed in the elections. Therefore he is weak.

“With China’s rise, we gradually have the ability to have a clear understanding of the US. The country is too lazy to reform. US society selected Obama, but there is no great American president in this era.”

China called at its last meeting with Obama for there to be “a new model for a great power relationship,” clearly signaling that the time had come for the US to treat China with the same respect it shows other great powers — as if that isn’t happening already. But, as Haddick notes in his book, China is a rapidly growing, nationalist power, on its way to becoming the chief US competitor. The last time that happened, when Germany unified and rapidly became the big economic and military boy on the continent, it led to two wars.

“Within a decade,” he writes, “China’s economy, and the potential for that economy to support military power, will constitute a rival the size of which the United States has not faced since it emerged as a global power over a century ago.” How does one coexist with a rapidly rising power, one fired by a hunger to redress centuries of wrongs by Western powers and by Japan and to demonstrate that it is due considerable respect? Must it mean armed conflict?

Haddick offers a strategy to avoid that happening with China, and at the same time, to maintain the rules-based international order that has made both the United States, China and most of Asia quite rich.

Our front-line Pacific allies are the key to managing this relationship, Haddick says. Their militaries and ours need to “hold at risk” China’s greatest strengths. In a brave prescription, Robert suggests that pouring money into weapons that can destroy the Chinese land-based missiles that can hold our Navy at risk makes the most sense. Perhaps, he says, the US should build fewer aircraft carriers and short-range tactical aircraft (I think you can read F-35 there) and put that money into Long Range Strike systems (read the new bomber).

This is not a new form of containment, as we pursued against the Soviet Union, Robert argues. Our trade ties with China and China’s with us and its neighbors are deep and lucrative for all. We are engaged. The goal is to steer China’s leadership to a “path that benefits China, its neighbors, and the United States.” It will be expensive. But the costs of failure will be much higher, Robert argues.

The greatest barrier to achieving such a result, from the American point of view, are those with vested interests in the present defense posture. Changing that will require strong civilian leadership, Haddick notes.

Obama’s party may have lost in the election but he is still president of these United States, with the most powerful economic, diplomatic and military tools in the world at his command. He has nothing left to lose and much to gain by cutting a bold foreign policy swath.

Editor’s note: I urge you to read Haddick’s book. With his usual flair, Robert presents his arguments clearly and simply but also with great subtlety. I’ve read nothing close to it in the quality of its thinking on this crucial subject.