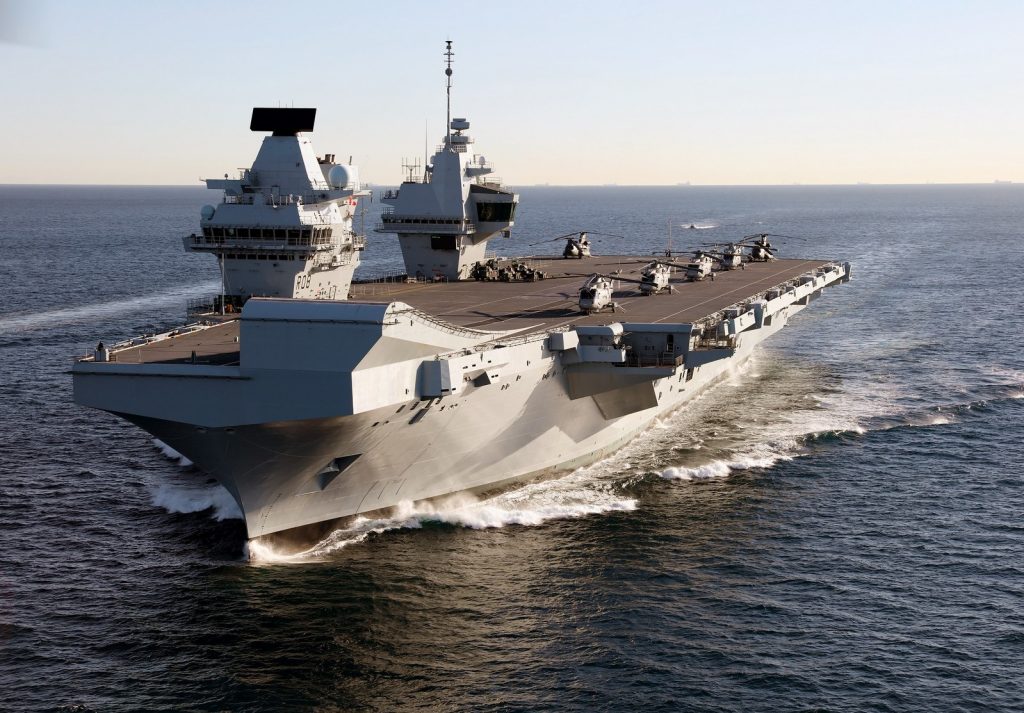 The new Royal Navy carrier HMS Queen Elizabeth off Gibraltar. Note the prominent “ski jump” on the bow to allow launching of short-takeoff aircraft like the F-35B.

The Royal Air Force is transforming itself at a time of great strategic uncertainty.

One of the foundational pieces of the RAF’s future will not be on display at the Farnborough Air Show this week, because it’s simply much too big and Farnborough’s too far inland. We are speaking, of course, of the new Queen Elizabeth -class carriers.  The RAF is working with the Royal Navy to jointly train their new air combat force of F-35Bs flying off of the new ship. 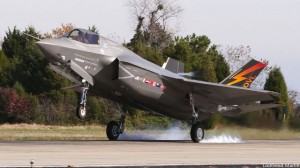 The UK has built the carrier as part of a national shipbuilding effort, enabled by the coming of the F-35.  The coalition working relationship surrounding this effort will be evident both at the Royal International Air Tattoo, where the Air Chiefs meet and discuss the way ahead, and at the Farnborough Air Show as the F-35s fly as well.

The F-35, of course, is coming not only to the RAF and Royal Navy but to partner nations in Europe and worldwide, creating new opportunities for collaboration.  It’s particularly important that the UK will be flying the same aircraft as the Northern Europeans, including the Dutch. And the close working relationship with the US Navy and Marine Corps will be evident as the HMS Queen Elizabeth crosses the Atlantic this summer for F-35 integration training off of the Virginia Coast. What’s more, the US Marines will operate off of the ship, including next year during further ship trials off of the British coast.

As Group Captain Ian Townsend, the RAF Marham base commander, where the first F-35s arrived recently, noted in my interview with him: 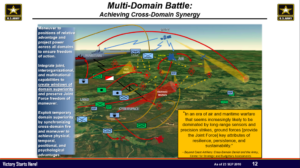 “In the past two decades our airpower has been dominant. But we do not want to introduce the F-35 as a replacement aircraft operating within the constraints of the legacy system. We need a multi-domain capability to ensure that our adversaries do not simply work around a classic airpower template.

Group Captain Townsend noted that there was very little real familiarity with the F-35 in the UK defense structure, something the first squadron at RAF Marham would immediately begin to remedy. Flying at the RAF centennial and at Farnborough is a high-profile part of that familiarization process. 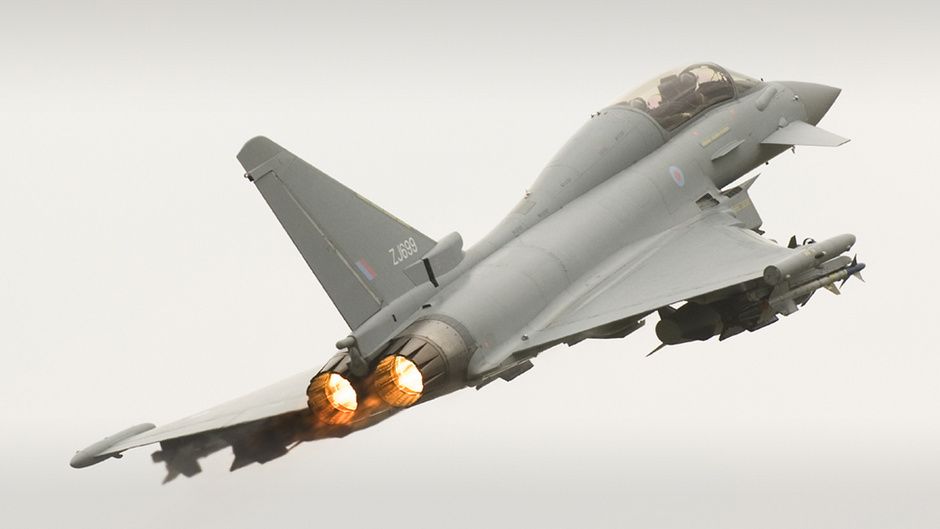 At the same time as the British bring F-35s over from the US, other aspects of RAF transformation highlight another key aspect of the coalition approach:, the incorporation of new or modernized aircraft built in Europe. Particularly critical is Project Centurion, whose main focus is transferring some of the weapons carried by the soon-to-be-retired Tornado to the newer Typhoon, now being modernized and upgraded to take on many of the Tornado’s mission. 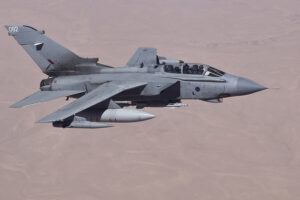 Less visible but very real is the progress the RAF has made with regard to aircraft availability for Typhoon. The British government and industry have worked with the RAF to shape new approaches to provide for enhanced fleet performance. The contract is the product of the evolution over more than a decade of working on support arrangements applying performance-based logistics to a fleet availability approach. Indeed, the new TyTAN contract has much to teach the rest of US and European defense industry with regard to sustainment and investments in force structure development.

This TyTAN contract is the latest iteration of Typhoon support, first launched in 2016. Typhoon Total Availability Enterprise, to give the full name, is focused on fleet management and fleet availability.  It is less flashy than a flyover at Farnborough, but keeping airplanes flying instead of on the ground awaiting maintenance is critical to any mission, above all to the new strategic context of peer competitors.

The new TyTAN approach is based on organizational and legal changes made by the UK government which allow savings from sustainment to be plowed back into the modernization of the aircraft.  As Steve Worsnip, Vice President for F-35 Sustainment at BAE Systems commented during an interview at RAF Coningsby earlier this year with me:

“Industry was not being paid to replace things or benefitting from the need to repair. …We had buy-in from the RAF, MoD and industry to enhance performance, generate costs savings and to provide for new monies for modernization of the aircraft.”

In other words, the TyTAN approach is provides incentives for fleet enhancement, rather than simply sustaining aircraft in their current state.   Savings can be provided to support the Centurion Program and other modernization efforts for Typhoon.

This is about more than just spare parts. It is a cultural and organizational shift whereby the Ministry of Defense, the RAF, and industry can work together for better results. 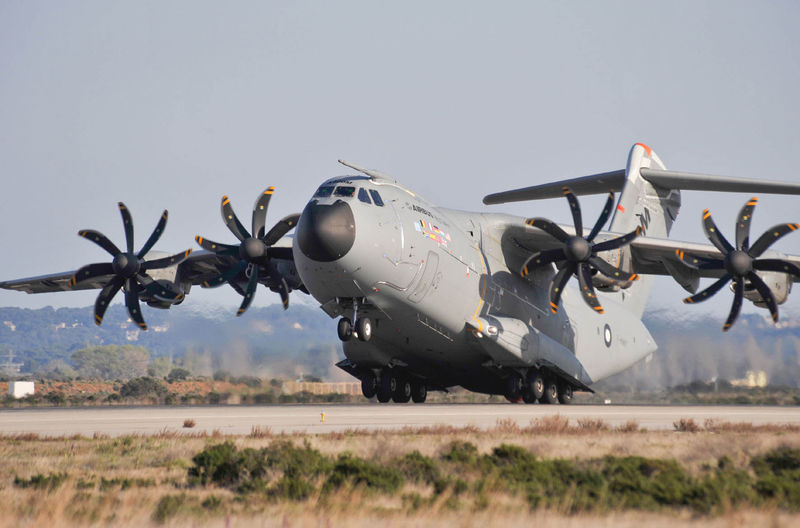 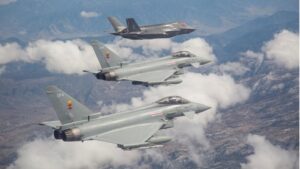 But Brexit is raising challenges to the future of UK aerospace industry’s ability to work with Europe. True, the US-led F-35 is also a coalition-built aircraft, with British industry having 15 percent of the F-35 program, positioning it well for the next three decades of the globe-spanning program.

Nevertheless, UK industry needs to have a strong relationship with Europe as well.

Occurring at a time of political turmoil in both the UK and continental Europe, it is very clear that Brexit provides a major challenge to UK defense and aerospace industry. Those sectors depend on their role in global supply chains and programs, many of which are European.

Airbus is a central player in the UK aerospace industry and defense.  Leonardo is many ways a UK-Italian company.  MBDA is a Franco-UK company with German and Italian aspects. Thales has a very large UK component which both complements and challenges the dominant French part of the company.

The CEO of Airbus recently highlighted how he saw the Brexit challenge: “Soft or hard . . . light or clean, [it] will be damaging for industry, for our industry and damaging for the UK,” he said in a briefing in London on the European aircraft maker’s operations.

The Airbus chief said the UK government had “no clue, no consensus on how to execute Brexit without severe harm.” He said Brexit was distracting politicians — both in the UK and Europe — from important issues that would determine the future of the UK and Europe. 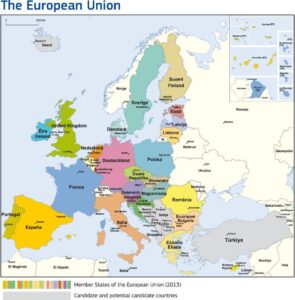 “This Brexit discussion is consuming so much bandwidth of our political elites — over here and in Europe — that it seems the governments have very little time to focus on those questions that really count for the future and competitiveness . . . proper educational infrastructure . . . proper infrastructure. These are the things that will decide our competitiveness in Europe in future.”

In short, the future of the RAF is on display at the Farnborough Air Show. With the F-35, the RAF is part of the multi-domain airpower transformation and will work closely with European allies, notably in reshaping Northern Tier Defense.  With the Typhoon, the RAF is seeking a modernized aircraft reworked to compliment the F-35 but with a yet undetermined relationship with its European partners.  And the A330MRTT and A400M aircraft, as well as MBDA missiles, are part of a broader context of resolving Brexit.

It is challenging enough to deal with the Russian moves in Europe; but many of the most significant changes are coming within Europe and between Europe and the US.  The recent visit of President Trump shows the US President highlighting challenges without actually contributing to their resolution. But the British and the Europeans clearly need to resolve some core challenges in moving ahead with their aerospace industry.