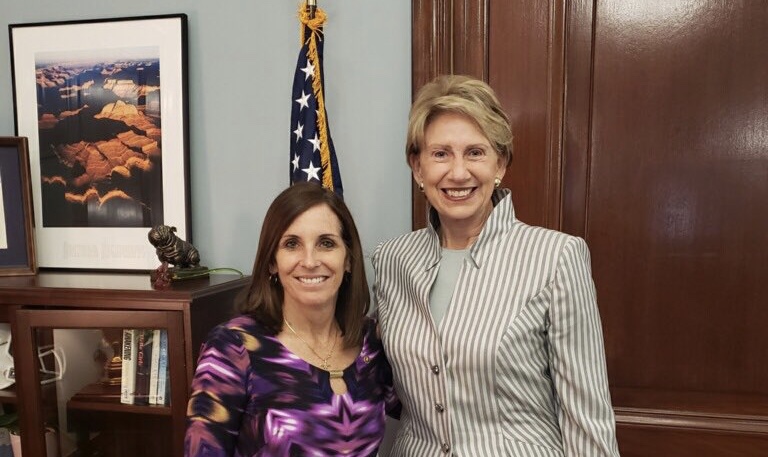 WASHINGTON: After Heather Wilson celebrated the end of her tenure as Air Force Secretary on the way to becoming president of the University of Texas in El Paso, President Trump announced the nomination of her successor, former chairman of the Aerospace Corp.

Barbara Barrett, who served as ambassador to Finland under the second President Bush and was nominated as Air Force Secretary then but was never confirmed, appeared to have been championed — or at least heavily supported — by Arizona Sen. Martha McSally. The former A-10 pilot rushed out a press release saying she “has been working with the Trump Administration to advocate for Barrett” since Wilson announced her departure.

I am pleased to announce my nomination of Barbara Barrett of Arizona, and former Chairman of the Aerospace Corporation, to be the next Secretary of the Air Force. She will be an outstanding Secretary! #FlyFightWin

The release says she spoke with Trump on May 17, “urging him to select Barrett for the position. McSally met Barrett in 2012 and they have become close friends since.” Barrett is from Arizona.

“Ambassador Barrett is a force to be reckoned with and has the leadership, experience, and knowledge to lead our Air Force into the future during a time of increased global threats,” the senator said in her release.

Barrett boasts an impressive airpower resume. She’s an instrument-rated pilot who was the first civilian woman to land in an F/A-18 Hornet on an aircraft carrier and qualified for space flight. She’s in the Arizona Aviation Hall of Fame and is currently chairman of the board of the Aerospace Corporation’s Board of Trustees. The federally-funded research and development corporation does eye-watering work on the most advanced space systems.

She’s also a life director of the Space Foundation, serves on the board of the RAND Corporation and is owner, with her husband, of the luxurious Triple Greek Guest Ranch in Montana, named the best hotel in the world in 2014 by Travel &Leisure magazine.

Barrett would seem to mark a continuation of the service’s basic path set by Wilson, another dynamic and accomplished woman with a deep resume. Barrett boasts less direct national security experience but more managerial experience than Wilson. Her knowledge of space issues and personnel is likely to stand her in very good stead as the Trump Administration and Congress continue their struggle over the future of the Space Force.