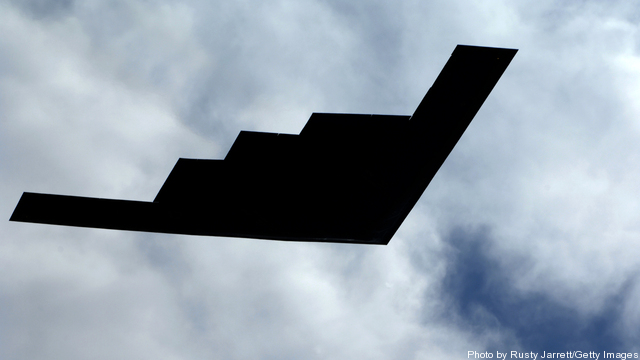 “We must maintain the nuclear triad,” he said, drawing a tiny smattering of applause — the only spontaneous applause — from the standing-room-only audience at the Air Force Association’s annual conference. Donley’s comments come as debate increases in the nuclear priesthood about whether the land-based portion of the triad is really needed. Debate about whether the new long-range bomber is needed has also been vigorous, with retired Gen. Hoss Cartwright, former Vice Chairman of the Joint Chiefs, recently saying he had not been convinced of the need for a manned platform.

What was most remarkable about Donley’s speech was that, while he acknowledged the difficult budget debate, he essentially pledged to keep doing almost everything the Air Force already does.

He did include this caveat: “To get these savings we will need to accept greater risk in some areas, terminate some lower priority programs, streamline others, continue driving efficiency in our operations, and make some tough choices about the core tenets of our national security strategy.”

Then he proceeded to make almost no choices, unless you count keeping what you’ve already got as a choice. And, of course, it is one. Here’s what Donley said about capabilities. First off, it’s all about something he called “balance.” That means keeping “air superiority” — Lockheed Martin got a resounding vote of confidence for the F-35 — “precision air-to-ground attack,” Special Forces, C4 (command, control, communication and computers), the KC-46 airborne tanker, drones, and a host of space capabilities including missile warning, ISR, GPS, weather and space tracking capabilities.

His wrap-up: “There is no question we face difficult choices, but with these priorities firmly in mind, we can still advance Air Force capabilities in important areas, such as fielding the F-35, the KC-46, a new Long Range strike bomber, key satellites and other systems.”

So tune in after the congressional Super Committee finishes its work and we’ll see what the Air Force Secretary has to say then.