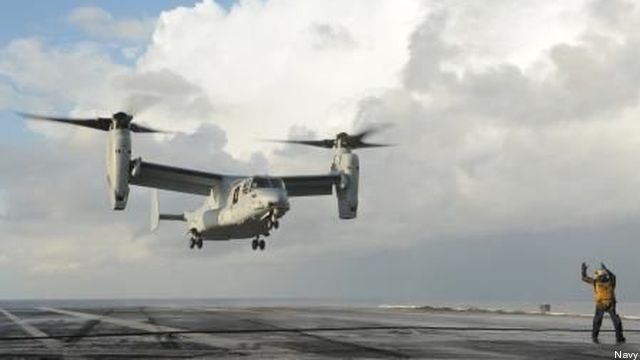 UPDATED: Israeli Air Force Flew In CV-22 When In US; UAE May Be First Foreign Sale

Last week’s crash in Morocco won’t slow down the V-22 Osprey program, which in 2013 can be expected to win its first foreign sale and is poised for visible growth over the next two years, the Marine colonel in charge of it made clear in a media briefing here.

Col. Greg Masiello, V-22 program manager for the Naval Air Systems Command (NAVAIR), said in a Monday briefing at the annual Navy League Sea Air and Space conference that 2012 will see the Marine Corps stand up two V-22 squadrons of 12 aircraft each in Okinawa and the Air Force Special Operations Command establish one of its own at Royal Air Force Mildenhall in England.

Neither Masiello nor John Rader, vice president for tiltrotor programs for Boeing Co., who also spoke at the briefing, would identify the foreign nation they think might buy Ospreys beginning in 2013, but we understand the United Arab Emirates could be the first.

Another strong possibility is Israel. When the head of the Israeli Air Force visited the US last week, he flew in the special operations version of the Osprey, the CV-22, we hear. The Jerusalem Post reported that he flew in a V-22, not specifying which version of the aircraft. Last year, Israeli air force pilots received training and flew demonstration flights in the V-22 at Marine Corps Air Station New River near Jacksonville, N.C. Japan’s military also has expressed interest in the Osprey in the past.

Boeing and its 50-50 partner in the Osprey, Bell Helicopter Textron Inc. of Texas, have added incentive to seek foreign sales because the number of Ospreys they produce each year is to fall dramatically under a new five-year contract the companies have agreed to, Masiello noted.
In 2013, he added, HMX-1, the squadron that flies the president’s Marine One helicopter, will begin receiving 12 Ospreys that will be used to haul cargo and passengers — including Secret Service agents, White House staff and the news media — during presidential trips.

“They’ll be the only aircraft there in that support in capacity,” Masiello said of the Ospreys to be assigned to HMX-1, which will continue to use the familiar white-topped Sikorsky Aircraft Corp. VH-3D helicopter to carry the president. The Ospreys, which tilt two huge wingtip rotors upward to take off and land like a helicopter and swivel them forward to fly like an airplane, are to replace CH-46E Sea Knight helicopters that HMX-1 currently uses for so-called “green missions.”

Noting that the Marine Corps version of the Osprey, the MV-22, is now cleared to land on and fly from big deck aircraft carriers following test landings on the USS George H.W. Bush (CVN 77) in March, Masiello said he also thinks the chances are good that the Navy will soon begin buying 48 V-22s that have been in its long-range budget plans for years, perhaps to replace the aging C-2A Greyhound fixed-wing aircraft it uses to deliver cargo and personnel to carriers.

Masiello said he had read a recent Navy analysis of alternatives of the issue that hasn’t been released and it “reflects a shift in the cultural mindset” toward the Osprey.

NAVAIR expects to sign a five-year fixed-price contract with Bell-Boeing before the end of the year under which the government would buy 91 MV-22s for the Marine Corps, which wants 360 in all, and seven CV-22s for the Air Force, which is planning a fleet of 50 Ospreys, the Marine colonel said. A foreign sale or a sale to the Navy or both would help Bell-Boeing keep the cost of those additional Ospreys down.

The terms of the new multiyear contract haven’t been announced, but under the existing five-year deal, which began in fiscal 2008, the Marines are paying about $67 million per Osprey and the Air Force, whose CV-22s carry secret special operations gear, is paying about $78 million.

Boeing executive Rader said that while the production rate will plunge from a peak of 40 Ospreys under the existing contract to a first-year rate of 21 under the new deal, Bell and Boeing “have committed to the government” to keep prices low enough to produce the 10 percent savings over equivalent annual contracts Congress requires in such multiyear deals. Undersecretary of Defense Frank Kendall said in a letter to Congress last month that the new V-22 contract will save $852 million compared to what it would cost to buy the 98 aircraft involved in annual contracts.

Masiello said that in addition to attracting interest among potential new customers, the Osprey fleet made significant improvements in calendar year 2011 to its operating cost and reliability rate. The cost per flight hour, now about $10,000, dropped 13 percent in 2011, he said, while readiness rates improved 19 percent.

Masiello declined to comment on the crash last week of an Osprey from Marine Corps squadron VMM-261, based at New River, during a bilateral military exercise in Morocco, killing two enlisted crew chiefs and seriously injuring two pilots. In answer to a question as to why the rest of the V-22 hasn’t been grounded, though, he said that while the accident is still under investigation, “We have nothing right now that would lead us to have any lack of confidence” in the Osprey.

Breaking Defense reported Friday that the accident occurred in clear weather as the tiltrotor transport, which takes off and lands like a helicopter but flies like an airplane, was departing a landing zone after dropping off some troops.