We Spend Too Much On Defense 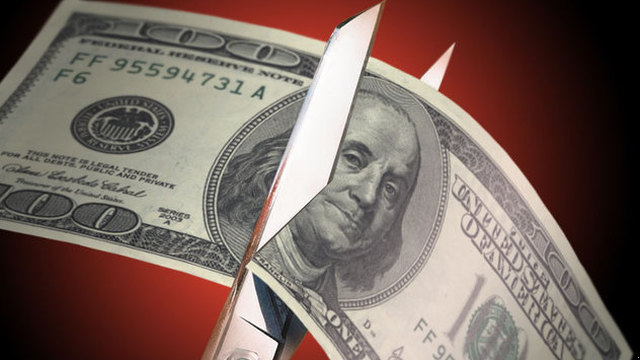 Washington, DC is echoing with a chorus of “sequester fear.” It is an election year and the cacophony is deafening: sequester is a budgetary Pearl Harbor, a “doomsday machine” that will shred our national security. The Pentagon says it, members of Congress from both parties say it, and the defense industry is jumping up and down.

Pure balderdash, but with a purpose: win the election and set up a budget deal afterwards.

We spend more on the military than most of the rest of the world combined and have a globally dominant capabilities – deployable ground forces, steaming navies, flying aircraft, all backed by global logistics, communications, intelligence, infrastructure, and transportation. No other country in the world even tries to compete.

Behind the hyperbole about sequester is the reality these voices fear the most: The defense budget is going down and it is going down below the flat budgets Secretary Panetta has projected.

And that is a good thing. In contrast to the “defenders of defense,” we spend far more on national defense and the American military than we need to. A good dose of defense budget discipline today would be a good thing for our security.

Sweeping away the election-year rhetoric, there are several reasons why we spend more on defense today than we ever have since 1945, in constant dollars, and only some of it has to do with global realities.

The “realities” part contributes. But, typically, threats and challenges are the rhetorical icing on the military budget cake. They don’t explain the contents – I’ll get to that – but they make the contents look attractive. For decades, we exaggerated the Soviet military threat, as became clear after the wall came down. We then searched for a threat and, failing to find it, searched for “missions” to justify the size of the force and its large budget.

There have been some doozies, like “defending the global commons.” We do not defend every communications and observational satellite in space, fly fighters next to every commercial jet, or sail naval vessels next to every cargo ship and tanker. The security of space, the air, the sea, and the internet is ensured by international law, common understandings, and civilian international organizations, not by the military

Or “defending against aggression” globally, though we have only fought one modestly successful ground war since 1945: Korea was a stalemate, Vietnam was a loss, the invasion of Iraq was a morass, and Afghanistan teeters on failure. The only apparent “victory” – the Gulf War of 1991 – could have been accomplished with half the force we sent there.

Or “stabilization operations.” Military stabilization missions typically lead to blowback, as locals resist our occupation. And the one big success, the Balkans, took 20,000 troops (rotated), and the military rightly stepped back from reconstruction and let the civilians to the job.

Or “new threats.” Terrorists serve for a time. As devastating as the attack on the World Trade Center was, it was a military pinprick. Terrorists are not a strategic threat requiring large forces – our 60,000 special operations forces, at $10 billion, are cost-effective here – and success depends heavily on local action, intelligence, and law enforcement.

Or the cyber threat. Go carefully here. A cyber arms race is clearly under way, but we are not the innocent drive-by cyber-victim. The US (along with Israel), may be the most aggressive user of cyber-offensive capabilities in the world today. Moreover, the threat does not require a large force; this is a software war, not a conventional battlefield.

Of course, there is the search for a big threat. China will do today: a large economy and an assertive, if largely regional power. But, unlike the Soviet Union, China is not an ideological adversary, and it is deeply intertwined in the global economy. The Chinese military is probably half a century away from competing, but we need a threat and the Chinese will have to do.

In reality, since 1945 the US has not faced less of a strategic challenge than it does today.

So why do we spend so much? The answer is clear to all: inefficiency, poor management, lack of cost control, choice-making only at the budgetary margin, politics and economics. Everybody knows this – “defenders of defense,” the Congress, the media, the Pentagon, the industry all know we have a ludicrously over-budgeted defense system and don’t want to do anything about it. It’s too hard to change, so we just layer the new stuff on top of the old, at great cost, and layer strategy and national security on top.

To cite the obvious:

Although nobody can tell you how much each of these factors contributes to the overspending, contribute they do. And our true national security needs get lost, or are buried in the language of the debate, where “strategy” and “threat” become the refuge of scoundrels defending some less attractive goal. The system deludes itself into believing the rhetoric.

A defense build down is a healthy tonic for this over-spending. It strips away the strategic icing; choices have to be made; reforms have a chance; streamlining occurs. While it would be nice for strategy to drive this process, fewer resources works pretty well as an alternative. And, effectively done, it does not weaken the military. The military that emerges from a build down can be even better and more effective. The military that survived the deep build down from 1985 to 1998 used Saddam Hussein’s military as a speed bump in 2003 very effectively.

Our defense budget is way, way too large for our security needs. We have major economic and budgetary security issues to solve. And we do not face any existential threat and won’t for decades. And it will come down, at least $1 trillion from the level projected for ten years in last year’s defense budget (or twice what Panetta has proposed), setting any unlikely sequester aside.

A build down at that rate would still be less steep than in any since the end of the Korean War. It can be managed; we’ve done it before and can do it again.