Why Pentagon Must Embrace Transformation, This Time 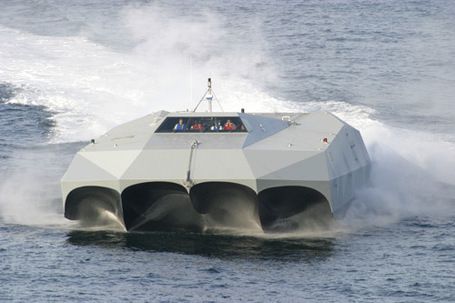 Military transformation boasts several fathers, including Andy Marshall (Yoda) of the Pentagon’s Office of Net Assessment, Andy Krepinevich of the Center for Strategic and Budgetary Assessments  (a Marshall acolyte) and the late Vice Adm. Art Cebrowski of the Office of Force Transformation (OFT), but relatively few children. The OFT built the M80 Stiletto (pictured above) and some in the Pentagon believe the combination of UAVs, satellite targeting and data fusion cobbled together over the last decade comprise an accidental transformational capability. Rob Holzer, a former colleague of mine who went on to work for the one Pentagon office charged with pushing transformation forward in the face of a very unfriendly (or to be kind, cautious) military, argues it’s time for the US defense enterprise to finally and truly embrace transformation. The Editor.

The U.S. military must quickly come to grips with the inescapable fact that fundamental changes to the entire defense structure are looming — just as similar changes loomed little more than a decade ago before the events of 9/11 upended the strategic landscape. These changes could be far more disruptive than the reforms initially planned during former-Defense Secretary Donald Rumsfeld’s tenure and may be even more critical to long-term U.S. national security interests than the “Accidental Transformation” brought about during the protracted and irregular warfare in Iraq and Afghanistan.

Facing the dire prospect of long-term budgetary austerity at home, while at the same time confronting strategic uncertainty and growing risks abroad, the U.S. military must embrace the process of fundamental change that was derailed by the decade of war. In a word, that process is called transformation.

While the concept of transformation became distorted so that it often simultaneously meant everything and nothing — and most damaging — was too closely associated with former-Defense Secretary Donald Rumsfeld’s tenure at the Pentagon — the fundamentals of the concept hold even more import for the U.S. military today.

Transformation’s previous application was stymied since its implementation took place in an ad hoc fashion in response to urgent issues arising from battlefields in Iraq and Afghanistan. This “Accidental Transformation” still achieved notable breakthroughs in terms of exponential use of unmanned systems; robots; greater reliance on human factors in irregular warfare, and development of integrated warfighting networks and expanded use of network analytics to gain insights into terrorist organizations. Today however, transformation writ-large is a strategic imperative that the department ignores at its own peril.

At its core, transformation is about instilling a process of continual change in the U.S. military. It is about creating “maneuver space” so that dramatically new ideas and concepts can be prototyped and experimented with by the operational forces. This is not modernization or selected enhancements to existing programs. It is not about “things” so much as identifying a set of “big ideas” that will in turn yield leap-ahead technologies and capabilities. These ideas will then inject significant changes in current military organizational culture and doctrine. It is also about empowering junior officers to challenge the status quo and enabling them to pursue new ideas and concepts. That is where the true value of transformation as a strategy can take root.

Transformation is not about definitions, doctrine or master plans. It is not about compiling lists of programs to axe, although undeniably some weapon systems will have to go in order to free-up funding to invest in what capabilities come next. There is no magical end point that yields a transformed military. Instead the entire defense establishment must adopt a transformation strategy so it can fundamentally re-think and re-position itself to confront a host of adversaries adapting and innovating at rates much faster and much more dynamically than our institutions have grown accustomed to understanding.

Marginal change in defense will no longer suffice given the giant laundry list of strategic challenges facing the Defense Department in coming years. Glancing at a cursory list of global issues looming just over the horizon reveal the stark magnitude of the range of festering problems with which the U.S. military must deal. These extend from coping with rapidly rising powers like China, India and Brazil, to feeling its way through the aftershocks of the Arab Spring (including today’s widening proxy war in Syria), to responding to more frequent natural disasters and population migrations. Intertwined across all of these international issues are the twin problems of increasingly sophisticated military capabilities (ballistic missiles, precision munitions, cyber, WMD?) in the hands of more second tier states and non-state actors. In short, while state-on-state conflict may be in decline, mayhem across the globe is poised to explode.

The current Strategic Choices and Management Review (SCMR) directed by Defense Secretary Chuck Hagel and the upcoming congressionally-mandated Quadrennial Defense Review provide robust, near-term opportunities to begin implementing transformational change across the entire defense establishment. Transformation and not marginal changes will produce the agile, flexible, lean and technologically advanced force that defense leaders continue to call for. If as Secretary Hagel says “everything is on the table,” then the development of a comprehensive Transformation agenda calling for significant change and restructuring should be the output of these strategic reviews.

The likely imposition of another $1 trillion in cuts to Pentagon spending over the next decade, via sequestration, only bolsters the immediate need to dramatically transform defense. Now is the time to rethink defense for the 21st Century and shed the leaden vestiges of Industrial Age military organization, process and procurement.

If we are truly facing a historic fiscal correction, one that leaders like JCS Chairman Gen. Martin Dempsey say will last for five to seven years — or even longer — then only a bold strategy of transformation will yield the degree of change required to meet this unsettling future. Dempsey has urgently called for undertaking “unpopular but unavoidable institutional reforms” that include shedding excess equipment and bases, reforming how weapons and services are procured and reducing redundancy across the military services. That sounds a lot like the same strategic objectives that transformation advocates strove to implement back in 2000-2001.

Today’s strategic challenges are not unlike those that prevailed prior to the tragic events of September 11, 2001. When then-presidential candidate George W. Bush delivered his “Period of Consequences” speech at The Citadel in September 1999, he called the transformation of the U.S. military a massive, but important undertaking, since the Department was still too organized to meet Cold War threats and not Information Age battles. In an eerie echo of today’s oft-heard mantra, Bush also cited the need to create forces that were smaller, more agile and less cumbersome that currently in existence. Marginal improvements were to be avoided and new technologies and strategies would be emphasized.

To help guide the magnitude of the changes being considered, the Bush Administration created the Office of Force Transformation within the Pentagon which reported directly to Secretary Rumsfeld. The Secretary tapped the visionary admiral, Art Cebrowski, to lead this new entity. As president of the Naval War College, Cebrowski had articulated for the Navy a concept called Network Centric Warfare. The emphasis was on the NETWORK rather than the CENTRIC part (which many critics failed to fully comprehend) with the net result being a networked force was a much more effective force.

With OFT, Cebrowski argued that the Defense Department was entering a new era of military competition, driven by information-age dynamics, which called for fundamental changes in how the U.S. military was organized, trained and equipped. The future was about “the small, the fast and the many,” to quote Cebrowski, and generating these new capabilities would necessarily come by dispensing with those capabilities that were “fewer, larger and slower.”

However, the prolonged campaigns in Iraq and Afghanistan—and the focus they rightly demanded—sapped the energy from Transformation’s agenda and it brought it to a bureaucratic halt. This is not to imply that significant tactical and operational innovation did not take place—it most certainly did in the form of new types of units, great gains in ISR, irregular warfare doctrine, the advancement of SOF and much deeper cultural knowledge and understanding. But these achievements were not of the scale or magnitude once considered part of the Transformation agenda.

Cebrowski’s argument holds even more value given the stark choices confronting the Pentagon today and seems to reflect what current defense leaders are seeking to implement in light of both an uncertain strategic environment and an austere budget climate. Secretary Hagel’s exhortation that the department can’t continue “tweaking or chipping away” current capabilities, processes or organization but instead must tackle the harder issue of creating entirely new entities for the 21st Century is entirely within the transformation agenda.

Change is always hard. The future is always uncertain. But now is the time to press ahead with the transformational change that the department has put off for far too long. We can’t afford to wait another decade for transformation. The time is now.