Why The Hate For Hagel? The Twilight Of The NeoCons 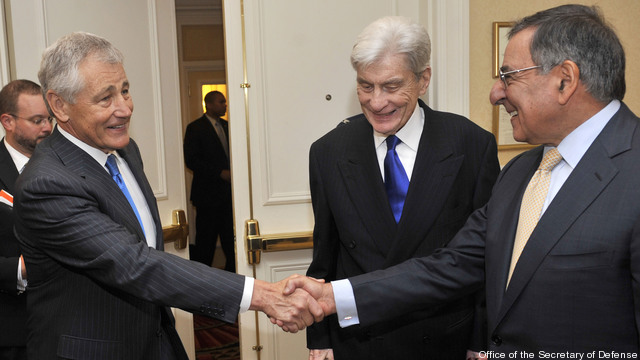 The pundits are reading the tea leaves and the critics sharpening their knives. What would Chuck Hagel be like, really, as Secretary of Defense? If you want to understand how the SecDef-apparent thinks, however, it’s hard to do better than to look at his own words. Read them carefully, and it becomes clear that the real reason why his appointment is so important — and why he is so hated on the right — is that it represents the final rejection of the failed neocon agenda.

Chuck Hagel has hardly been a shrinking violet. His foreign policy views have been loud and clear. They are best expressed in Hagel’s 2004 manifesto describing what he wanted the Republican foreign policy platform to be.

The worldview of this piece reads stunningly like my own 2004 manifesto that founded the Truman Project. And no wonder: We were both grappling with the failure of the then-ascendant neoconservatives to understand where our threats were coming from and how to wield power in the 21st century. While I disagree with some of Hagel’s policies, he is a twice-wounded combat veteran, he has decades of experience on the issues, and his basic worldview makes a lot of sense.

So what are his views? Weak states are security threats — which means we need to take demographics like the youth bulge seriously, and treat economic development, and democratic reform as security goals. The military is crucial — but it can’t solve all these new challenges. Moreover, we can’t be a strong country with an empty pocketbook, so we need to match our spending to our strategy, and ensure some fiscal discipline. Many of his areas of focus for security are non-military: He advocates for more language training, greater commitment to trade, thoughtfulness on energy policy, better public diplomacy, and a focus on working through coalitions to share burdens and create sustainable successes.

This is the Republican platform he wanted — but it’s not the GOP he got. As conservative writer Dan Drezner wrote in “Rebooting Republican Foreign Policy,” in Foreign Affairs, since the days of Eisenhower and Reagan, “GOP leaders stopped being smart foxes and devolved into stupid hedgehogs….Since 9/11….Republicans have known only one big thing — the ‘global war on terror’ — and have remained stubbornly committed to a narrow militarized approach. Since the fall of Baghdad, moreover, this approach has produced at least as much failure as success.”

And that is why there is such a hullaballoo.

The long knives are out because this, not the 2008 election, is when President Obama has really started to question the neoconservative assumptions. While his rhetoric has been a sea-change from that of George W. Bush, many of the neocon policies — from drone attacks to rendition — have increased or stubbornly remained.

Chuck Hagel will challenge these policies. He’ll question whether war with Iran will actually solve our security problems there. He’s likely to side with those in the Pentagon who think war is a “mow the lawn” strategy that will set back but not kill their nuclear ambitions, requiring a large, ongoing military presence in the region and periodic, strikes that create retaliation against allies like Israel without ending the nuclear threat.

He’ll also question whether the bloated Pentagon budget of the neocon days, which we have not come close to rolling back to pre-Iraq spending, is buying us the security we need. Rather than equating military spending with strength, Hagel understands that we both need more tools in the toolbox, and that you cannot be the strongest country in the world if you can’t pay your bills.

As Peter Beinart explained in his excellent piece on Hagel in The Daily Beast, “Unlike the Republican foreign-policy elite who for eight years cheered as the Bush administration charged its expansive “war on terror” to the nation’s credit card, Hagel does not view substantial cuts to the Bush-era defense budget as a retreat from American global power. To the contrary, he views them as essential to restoring the economic strength that must undergird that power.”

In other words, Chuck Hagel has become a lightning rod not because of the smokescreen issues naysayers have thrown up — in fact, many of his Republican opponents now used to be his supporters, and Hagel’s comments on Israel are no different than those that grace the pages of Israel’s leading daily, Ha’aretz, all the time.

They’re mad because he threatens to have the guts and the ability to actually change our strategy in a way that closes the door on failed neoconservative policies — through budget and strategy, not just words.

Now, I may not agree with all that Hagel says, but I do agree with Dan Drezner that “Republicans need to start taking international relations more seriously, addressing the true complexities and requirements of the issues rather than allowing the subject to be a plaything for right-wing interest groups. And if they don’t act quickly, they might cede this ground to the Democrats for the next generation.”

Many people might think that as President of the Truman National Security Project, that’s exactly what I want. It’s not. We need two parties able to have a smart debate on hard issues. We need correctives to overreach and complacency. And we need a functional Republican party on defense. But we don’t have one.

Chuck Hagel is getting his Secretary of Defense nomination under a Democratic President not because he left the Republicans — but because the Republican Party has left their vital center behind.