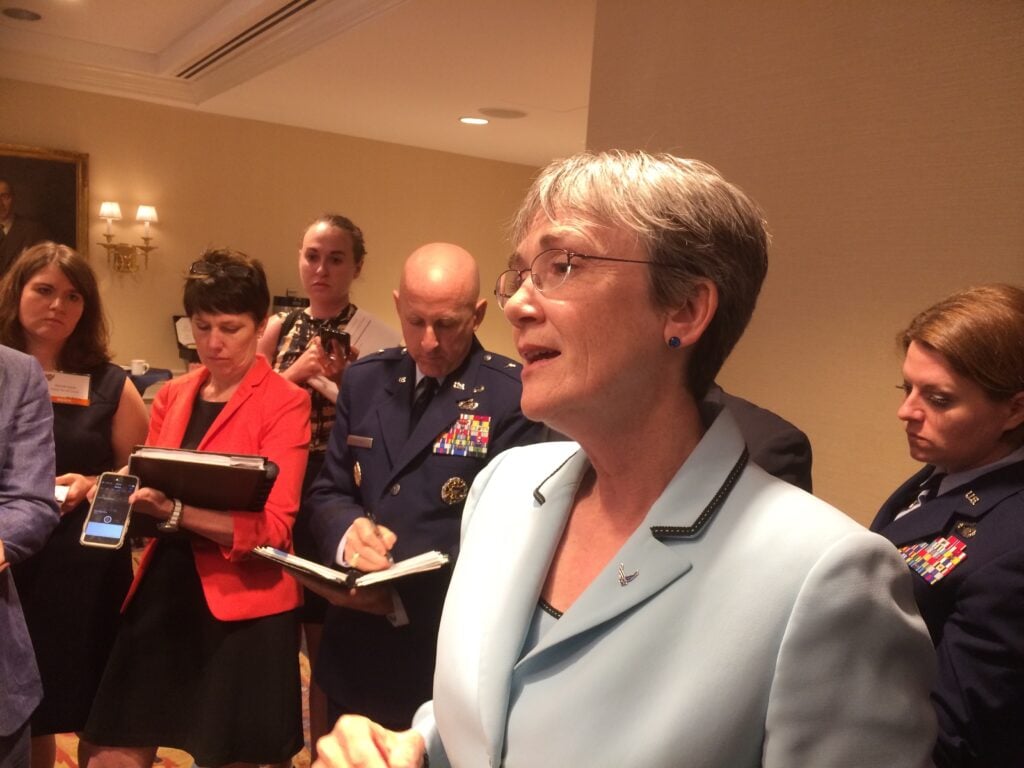 SPACE SYMPOSIUM: Outgoing Air Force Secretary Heather Wilson is cautioning against moving to a military space architecture based largely on LEO-based mega-constellations and commercial satellite services as a means to improve resiliency.

“Launching hundreds of cheap satellites each year as a substitute” for current milspace systems “will result in failure on America’s worst day if we rely on them alone,” Wilson said in an April 9 speech to the Space Foundation’s Space Symposium in Colorado Springs.

A comprehensive DoD-wide study of US milspace programs, threats and future architectures has found that so-called “exquisite satellites” (large, highly sophisticated satellites usually based in GEO for imagery, missile warning and Intelligence Community missions) will be needed, she told a packed auditorium.

While the Air Force is “funding development of LEO and commercially based systems for some of our missions,” Wilson said the study — which involved all DoD space-related agencies, the combatant commands, and the NRO — found that “space missions not well aligned” with commercial and LEO satellite operations are “better off  staying where are and making other changes to protect themselves.”

She will begin briefing Congress and DoD leadership “in the coming months” on the findings of the 90-day study mandated in December 2018 by Air Force Chief of Staff David Goldfein to inform 2021 budget decisions and “validate” current space programs and strategies to ensure that the United States “continues to dominate” in space. Wilson said that among other conclusions, the study found “different missions require different solutions” and that “increasing the number of satellites is not enough” to ensure that the Pentagon can “fight through” a conflict that involves attacks on US space assets. She also noted that DoD’s involvement in pushing for all services and space mission systems to move toward multi-band satellite communications terminals.”

Wilson, who steps down in May to return to academia as president of the University of Texas in El Paso, touted the progress made by the Air Force Space and Missile System Center (SMC) in speeding space acquisition. Wilson has been critical of DoD plans to move rapid acquisition authority for next-generation space systems to the future Space Development Agency (SDA) of the Space Force, stressing the recent successes of the SMC and the Air Force Space Rapid Capabilities Office. At the same time, she consistently has been cautious about DoD’s increased interest in moving rapidly to incorporate commercial LEO capabilities into the milsat mix. 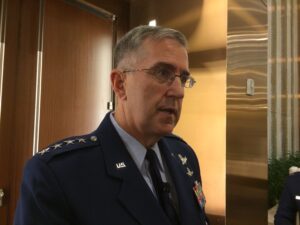 Gen. John Hyten, commander of STRATCOM and former head of Air Force Space Command, speaking to reporters later, agreed with Wilson that some modicum of caution is needed as DoD ponders a shift in space posture. He said that in his 30 years of looking at the question of making more use of LEO for sensing and communications missions, he continues to find “a lot of merit in the concept.” However, he said it is too early to “make a decision to move all in” because there has not been enough work to prove out concepts and what “works to scale.” This is why the Pentagon needs to invest in “risky programs” and take advantage of commercial risk taking to prove out what works and what doesn’t. But Hyten sounds much more enthusiastic than Wilson about the chances for “proliferated LEO” to solve the resiliency problem as part of a mixed architecture including satellites in geosynchronous, medium and highly elliptical orbits. “If it works,” he said, “it will be a game changer.”