Zumwalt Close to Losing Gun, But Open to EW and Directed Energy 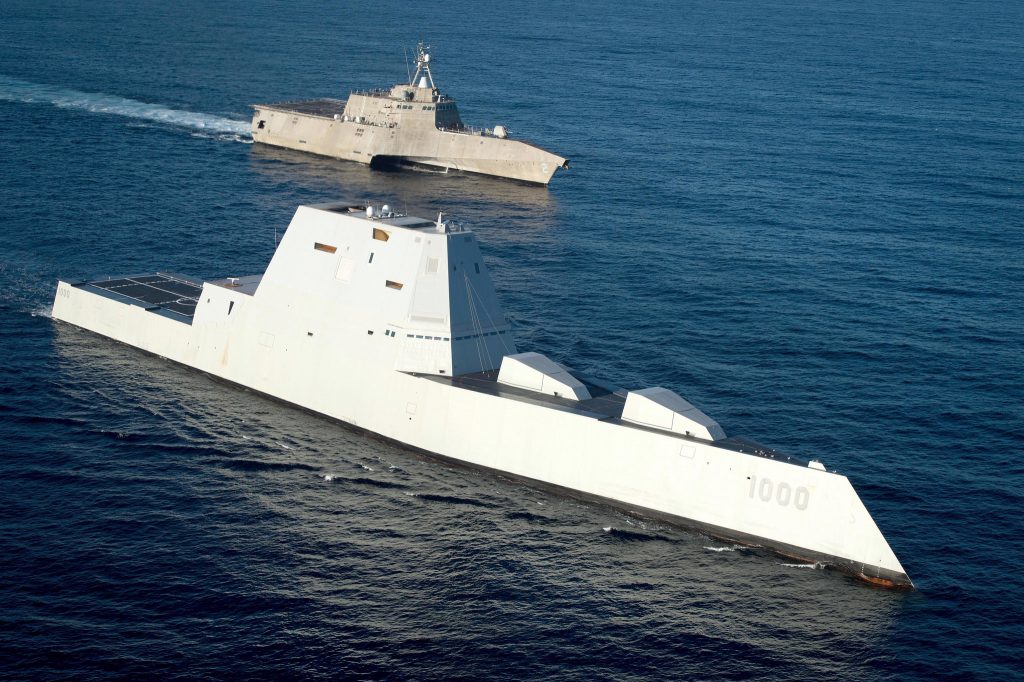 WASHINGTON: The once-revolutionary prospects of the Navy’s Zumwalt-class destroyer continue to be whittled away. Having lost some of its touted stealth capabilities and suffered a series of engine and electrical problems, now it’s likely to ditch its long-troubled gun.

The Advanced Gun System on the Zumwalt never lived up to its billing. When the Navy decided the Zumwalt design had grown too expensive and it would restart production of the tried-and-true Arleigh Burke class instead, slashing of the Zumwalt class from 32 ships to just three pushed up the price of the planned projectile to almost $1 million a round. But there’s another issue: It was never able to shoot as far as the Navy wanted it to.

“We just cannot get the thing to fly as far as we want,” Vice Adm. William Merz, deputy chief of naval operations for warfare systems, told the Senate Armed Services Seapower subcommittee on Tuesday.

The ship “is a very capable platform with or without that gun,” Merz assured the senators. “We will be developing either the round that goes with that gun or what we are going to do with that space if we decide to remove that gun in the future. The ship is doing fine, on track to be operational in 2021 in the fleet.”

As initially planned, the Zumwalt class would have been equipped with two 155mm guns built by BAE Systems which would fire Lockheed Martin’s Long-Range Land-Attack Projectile. The projectile was eventually found to be too costly, so it was canceled.

But the ship will sail on anyway. “We determined that the best future for that ship is to get it out there with the capability that it has and separate out the Advanced Gun System, leaving everything else in place,” Merz said.

The Navy decided last year that the entire mission for the ship would change, scrapping plans to have it operate in the littoral (coastal) environment lobbing missiles inland and supporting ground troops, instead making it into a ship-killer.

Merz said that “those VLS cells are larger than any other surface ship VLS cells, so that opens up an aperture of more weapons options for that ship.”

Asked by Sen. Angus King of Maine whether the Zumwalt class might be able to play other roles in the future Navy, such as hosting directed energy weapons, Merz had some good news, predicting that the ship has enough space, weight, power and communications ability to allow the Navy “to expand this ship over time. She is going to be a candidate for any advanced weapon system that we develop.”

In the longer run, the Navy is looking at an all-new destroyer or cruiser design built around the massive electrical requirements of future laser weapons, railguns, and other power-hungry systems such as radars.

While the original Zumwalt (DDG 1000) continues to undergo combat system tests en route to its 2021 entry into the fleet, the second Zumwalt-class ship, the USS Michael Monsoor ( DDG 1001) continues to grind through sea trials out of Bath Iron Works in Maine. But even there, things haven’t gone as planned. The ship suffered a massive engine failure that required the replacement of one of its $20 million Rolls Royce MT30 gas turbines. It also suffered electrical malfunctions last December that required it again to return to port for repairs.

USS Lyndon B. Johnson (DDG 1002), the third and last ship in the vanishingly small class, is under construction.

The Navy might not build as many Zumwalt-class ships as originally planned, but its nascent frigate program — designed to make up for the failures of the Littoral Combat Ship program — is on track, Navy leaders said. (To show how serious the Navy is about missiles, while they haven’t yet chosen the winning frigate design, a Vertical Launch System is mandatory — a capability that was lacking on LCS).

And overall, despite public discussion of delays, the plan for a 355-ship Navy remains in place, the Navy leaders told the SASC.. The Navy is planning to release a new Force Structure Assessment next year, and 355 hulls will remain the floor for what the service will budget and plan for.

“We have seen nothing from the combatant commands to date, or from Secretary Mattis’ National Defense Strategy, that will give us any indication we’ll be coming off that 355-ship in composition or in total numbers,” Merz said.