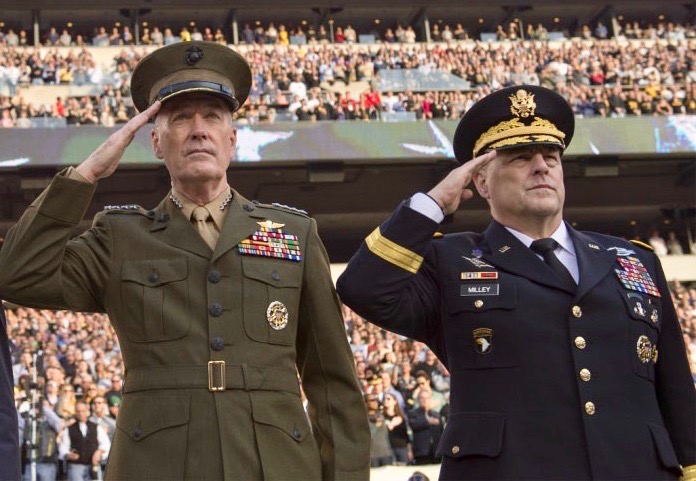 Once in a while it’s useful to pull everything together and try and benchmark what’s happened. The Acting Army Secretary did that just today for his service as departing Army Chief of Staff Gen. Mark Milley readies to take on the mantle of chairman of the Joint Chiefs of Staff.

Ryan McCarthy’s speech about that Joint Base Myer-Henderson Hall really speaks for itself. We’ve edited it for length. My takeaways: the Army went from two ready brigades to 25 and it finally — after at least three false starts — began to shed the heavy weight of the Cold War weapons known as the Big Five. Can Milley deliver something of the same magnitude for the entire US military? It’s a huge ask, but McCarthy may think Milley can do it. For proof, here’s the best line of the speech: “The Joint Staff won’t know what hit them.”

I first met Mark Milley more than a decade ago when we overlapped in Secretary Gates’ front office. Initial impressions were of a guy out of central casting from Boston, fresh off a “Black Op” that no one could talk about, ACUs covered with every tab and patch you could think of – who also happened to possess two Ivy League degrees. And he’s been my teammate, partner, and friend ever since.

So I am not exactly objective when it comes to General Milley. But any fair-minded observer would argue that his tenure as chief has been one of the most consequential in recent Army history.

Through General Milley’s unyielding focus and determination – and with help from the Congress and the President – the Army went from a readiness trough to a readiness peak: from two brigades receiving the highest readiness rating to more than 25; from units trained near exclusively for their next CENTCOM rotation to become proficient in the full spectrum of combat operations.

But his legacy goes well-beyond being the “Readiness Chief.”

Under General Milley and Secretary Esper, the Army began its long overdue shift: from systems designed to defeat the Soviet Union to capabilities that can conduct Multi-Domain Operations against the most capable modern adversaries; from the iconic but ageing “Big Five” platforms to the Six Modernization Priorities that will define American land power for another generation.

Recognizing that a 21st Century modernization plan and concept of operations would be hard to achieve with a 20th Century bureaucracy – General Milley stood up Army Futures Command, the biggest structural change within the service in decades.

As someone who never forgets about the 242 soldiers who made the ultimate sacrifice under his various command, General Milley recognized that the Army could not repeat the institutional mistakes of the past. He made it a personal priority to stand up and support the Security Force Assistance Brigades, recognizing that, whether we like or not, the Army has not seen the last of counterinsurgency or the train-and-equip mission that goes with it.