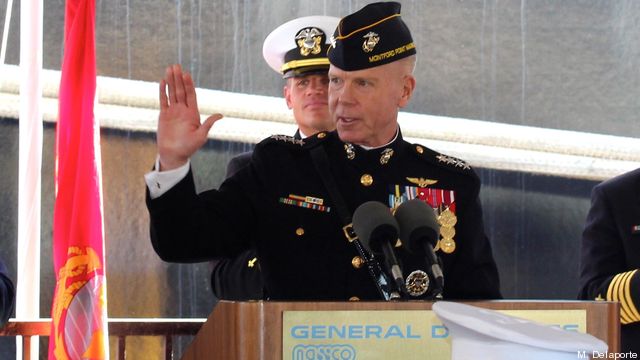 We attended the christening last week of the newest US Navy ship, an 80,000 ton (fully laden) vessel that is not an aircraft carrier.

Instead, the USNS Montford Point is the first of a new class of Navy ships, a Mobile Landing Platform, in essence a deployed port at sea. The ship, built at General Dynamics’s NASSCO shipyard in San Diego, adds to the ongoing revolution in what is called “seabasing,” the idea of supplying and sustaining military operations directly from ships at sea without requiring ports or staging bases on the land, a revolution which is being made possible by new ships, new aircraft, and new ways to use existing capabilities as part of the evolving seabase

There are several building blocks either already deployed or on their way that are reshaping the amphibious warfare Gator Navy. Traditionally the Navy’s amphibs acted like a Greyhound bus whose major function was to carry Marines TO the fight. Today, the Gator Navy is becoming a distributed expeditionary strike force, able to engage on multiple operational levels, ranging from security to disaster relief to humanitarian operations to various warfighting scenarios.

We have written before on Breaking Defense about some of the new elements: First, on the aviation side is the Osprey, which is creating a new capability to operate from seabases or land bases to integrate forces in new ways. In that piece, we highlighted the “Tsunami of Change” coming.

Second, the F-35B will bring to the fleet new C5ISR capabilities, which the Gator Navy has never had unless a large deck carrier was part of the operation. The Marines consider the F-35B to be a C2 and information warfare aircraft, which enables the entire MAGTF to operate more effectively. Third, the new USS America class, the Marines’ large deck amphibious ship which is aviation-centric, can provide flagship coverage for a dispersed sea base. Now comes the USNS Montford Point.

As we approached the ship from San Diego harbor, we passed several conventional Navy ships, such as the Arleigh Burke, LHAs, LPDs. Then, looming in front of us, appeared this 80,000-ton giant. As we looked at the ship, the big gaping hole in the middle is where the change has come. It’s built on the foundation of an oil tanker which NASSCO built for British Petroleum. Instead of tanks, you have open space on the ship.

The Montford is designed to offer a mix and match functionality for support to the fleet. Modules will be developed for the ship like the first module which will be placed on the ship to allow three assault landing or LCACs deployed per module.

In an interview with the ship’s operator, Military Sealift Command, Admiral Buzby underscored the ship’s flexiblity. Along with his other new asset, the T-AKE ship (also built by NASSCO), new multi-mission assets were being bought to allow for more flexible operations.

“New modules to support other missions could be added to support a new generation of sailors and Marines who have not even been born yet. One could easily envision this ship serving as a repair ship, a hospital ship, an aviation depot/support ship, or a dedicated LCS mothership in the future — given the appropriate mission capability package was developed and fitted. It’s 800 feet of ‘use your imagination,” Buzby said.

The admiral was underscoring a key element: the ship’s ability to add capabilities in years to come. The new ship is a platform, which will be enabled more effectively over time as new modules are added.

So far, the only mission capability package that is approved and being built is called the Baseline capability. It allows ship-to-ship offload from Large, Medium-Speed, Roll-on/Roll-off Ships or LMSRs via a vehicle ramp onto MLP, which has the capability to then enable further onload of up to three Landing Craft Air Cushion- class hovercraft or LCACs for transport ashore of equipment. The baseline package includes a raised vehicle platform (no covered storage), LCAC mooring ramps/support facilities, vehicle ramp (ship to ship), and fenders.

The $500 million cost per ship includes the baseline capability package. From an MSC perspective, the ship’s ability to stay at sea for long periods of time will enable it to support a wide range of missions, ones that require long on-station time. Mission capability packages will be designed, constructed, and placed aboard the ships over time as needs are identified and funding available.

The only additional capability package currently under development (but not yet fully approved or funded) is the Afloat Forward Staging Base package which could include an aviation landing area and hanger capacity of some size.

It also should be noted that such a large ship requires a relatively small crew of 34 core sailors to operate the ship. More crew will be needed during cargo ops to run the deck and moor the LCACs. There is no berthing on board for the additional personnel. After the interview with the Admiral, our colleague Ed Timperlake commented that the “mission of the ship was logistics, but it was engagement agnostic.”

This function fits in well with the Pivot to the Pacific in which the full spectrum of operations facing a sea base is not a function of policy planning but of operational demands and realities.

The USNS Montford Point will be part of 21st century concepts of operations innovations, and the types of ships to be procured in the years ahead need to be central to the evolving concepts of distributed operations so central to global operations.

The logistics side of the operational equation is often ignored, but it is clearly the tail that wags the dog. And this tail – the USNS Montford Point – could foster change beyond even the traditional understanding of the seabase.

James Strock, the Marines’ guru on seabasing at Combat Development Command, underscored the kinds of innovation this ship can foster:

“We’ve already been down to talk to the Army Chief of Transportation at Fort Lee, Brigadier General Stephen E. Farmen. The Army has hosts of ocean-going watercraft. We need to test if Army LCUs or Army Logistic Support Vessels could do a 90-degree ramp down marriage to the MLP for possible equipment transfer. We need to see if the Navy’s landing craft utility, the 1610 Class LCUs, could they do ramp down, what we call athwart- ship, 90-degree approach, on the MLP for at-sea transfer. We need to examine: Can you bring a Joint High-Speed Vessel alongside the MLP, slew its ramp 45 degrees and do at-sea transfer between JHSV and MLP? The combinations become endless, so you look at all of the various Army watercraft, and as you look at other military sealift command assets, and all the various multinational capabilities. The lance corporals and the gunnery sergeants are going to figure a lot of this out.”

There are two other important parts to the story of USNS Montford Point. The first is how the ship came to be. It demonstrates an entirely new way to build ships. When the Navy initially put together its design requests, the ship was going to cost north of one billion per ship. Given that logistics ships tend to be at the end of the line in priorities for funding, this placed it firmly it in center of the budgetary kill zone. It was on the way to the junk pile of ideas. Enter the NASSCO team, which worked closely with the Navy to find a way to make this ship a reality.

After years of rethinking how to build the ship, the Navy is getting three ships which are about 80 percent of the initial concept requirements for the price of the initial projected ship cost. In an exclusive interview for this article, NASSCO’s CEO, Fred Harris, sat down with us. Above all, Harris emphasized the need for close coordination between the design and manufacturing processes. “By combining a mature design with a well-designed manufacturing process with assurance that the materials to build the ship were available and with skilled workers, the USNS Montford Point could be built in a timely and cost-effective manner.”

There were two other factors that contributed to the success in building the ship. The first is the importance of having built oil tankers for BP and then using that experience to shape the Navy program. “I took Navy officials with me to visit the BP tankers and to ask them what they liked and didn’t about the ships. And we took their evaluations and our experience in building the tankers as a powerful baseline in which to improve the USN version of this ship.”

The second factor is the important role which South Korea played in the design and manufacturing processes for the ship. NASSCO has had a close working relationship with Japan and South Korea. For example, Harris told us, “the ship has a deck of one-and-one-half inches thick of steel. Normally, we would need six passes to do this, but the Koreans had a technology to do it in one pass. With the Korean technology, we were able to reduce cost and raise quality and performance at the same time.” If one is concerned about competing in the Pacific with the Chinese then working more effectively with our Japanese and South Korean allies is a good thing. And here the first of the Montford’s class has that cooperation built in!

The Montford Point Marines, the first African-Americans to serve in the Corps, are legendary for their courage and their success in fighting against the Japanese in World War II and against racism in the United States. Toward the end of his christening speech, Marine Commandant Gen. James Amos put on the hat of the Montford Point Marines alumni with 4 stars on it to drove home the point that he was the Commandant of all Marines, not folks who at one time were forced to be separate. Amos also delivered the best line of the day: “Because of sequestration, I am cutting my speech by 10 per cent and will only speak for 9 minutes rather than 10.”

The photos accompanying the article were shot by Robbin Laird and Murielle Delaporte on March 1.