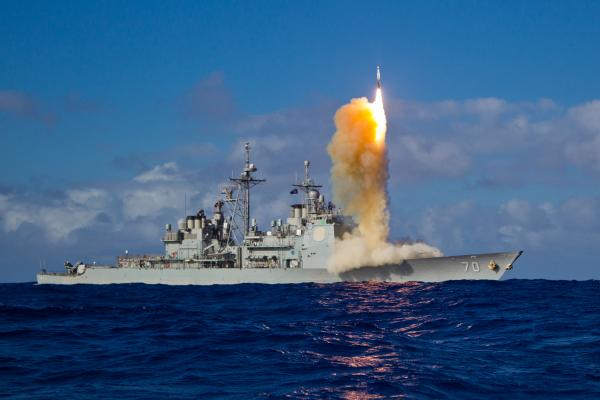 WASHINGTON: Sometimes success is its own punishment. Shooting down ballistic missiles is one of the Navy’s most high-tech, high-profile capabilities — and it’s one of the most popular with Congress as well. But as demand for missile defense increases at what the Chief of Naval Operations has called an “unsustainable” pace, it’s an ever-greater burden on a fleet that has plenty of other missions. If the Navy met every theater commander’s requests for ballistic missile defense, it would take 77 Aegis cruisers and destroyers — out of a total fleet of 84.

“Would I love to give this to somebody else?” Rear Adm. Peter Fanta, the Navy’s director of surface warfare, asked rhetorically in a recent conversation with reporters. “It would greatly alleviate the pressures on my budget — but I also understand everybody is under those same pressures.” 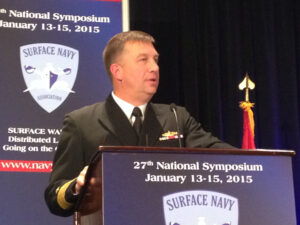 Within that tightening budget, the Navy has set priorities that put it at odds with powerful players on the Hill. Now ballistic missile defense has gotten entangled with one of the most contentious naval questions before Congress: the Navy’s plan to take 11 of its 22 aging Aegis cruisers out of service (temporarily) for a multi-year modernization. Five of those ships have BMD capability now — but they won’t have it when the upgrade’s done.

“The Navy is all about cutting dollars,” Rep. Randy Forbes told me. The HASC seapower subcommittee chairman has been the bitterest opponent of the cruiser plan, which he sees as short-sighted and even disingenuous. The BMD cutback only makes him madder. At a recent hearing, Forbes told me, “you heard Admiral Fanta be very clear, [and] he said this is just about money.”

“If they reduce by five ships the BMD capabilities that they have now, that is going to make it much more difficult for them to reach the goals that the Navy has laid forth,” Forbes said.

For high-intensity, high-tech warfare — say, with China — the Navy says it needs 40 warships with the most advanced version of the Aegis system. That “Baseline 9” lets a ship shoot down enemy aircraft, cruise missiles and ballistic missiles simultaneously. The Navy currently has 33 Aegis BMD ships, but most of them can only engage either cruise missiles or ballistic missiles at any given moment, not both at once. A well-armed enemy can exploit that by launching a mix of weapons.

So how many ships have the full-up capability? Three, according to a Navy spokesman.

“What you really heard the other day was, ‘I need 40 apples, and by the way I have 33 oranges,'” Forbes told me. That 33 ships have some form of Aegis BMD isn’t really relevant to the 40-ship requirement for full Aegis BMD, he argued. The Navy expects to not reach that number until 2026, or 2024 at the earliest. 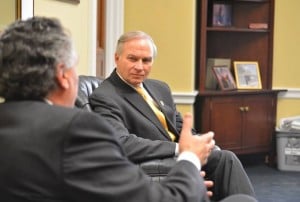 The “early twenties” is also when Fanta expects the cruiser and destroyer fleet to get back to a sustainable, stable cycle for training and maintenance. Deployments have been averaging 9.2 months, he told Congress, well above the goal of seven.

BMD missions are hardly the only driver of these long deployments, but they’re an ever-growing one. “On any given day, at least four to six destroyers or cruisers are tied up on this mission,” said Bryan Clark, a former top aide to the Chief of Naval Operations now at the Center for Strategic and Budgetary Assessments. Because keeping one ship on station requires two or three others in transit, in repairs, or training, Clark continued, BMD overall can take up 16 to 18 ships.

“The tension is, the Navy is trying to do all these different missions with budgets and a fleet that are too small,” said Thomas Karako, head of the missile defense program at the Center for Strategic and International Studies. “The Navy wants to strip missile defense interceptors from some cruisers, and that’s understandable, but I suspect Congress may disagree.”

It may seem backwards to upgrade a warship by removing some of the capabilities it already has. It’s not clear how much money this would actually save, either. But the Navy has arguably been ambivalent about Aegis BMD since the beginning.

“The Navy was not enthusiastic in taking my money to begin the program,” said Amb. Hank Cooper. Cooper was director of the Strategic Defense Initiative — later renamed the Missile Defense Agency — when work on Aegis BMD began back in 1991-1992. It was an uphill battle for years after, he told me.

“Without support from Capitol Hill,” said Cooper, “the Pentagon would have killed the program in its cradle” or at any number of points “throughout its development.”

When the Navy did embrace Aegis BMD, it arguably did so less as an end in itself than as a means to expand the destroyer fleet in general. The real driver, said Clark, “was mostly to protect large surface combatant procurement in the 2000s when wars in the Middle East were taking an increasing share of the budget and attention.”

“What backfired was [that] in the end, the Navy probably created more of a demand for cruisers and destroyers,” Clark told me, “leaving an even larger gap than had they not advocated for the BMD mission in the first place.”

Modernizing cruisers faster would help close that gap — in the short term. In the long term, returning the ships to service sooner means they wear out sooner and must retire sooner as well. Adding new ships would help across the board, but the Navy probably can’t buy destroyers faster than the two-per-year in the current block-buy contract.

So are there ways to shift the BMD burden to someone else besides the cruiser and destroyer fleet? It turns out there are, within tactical, technological, and political limits. We’ll discuss those in our next story.