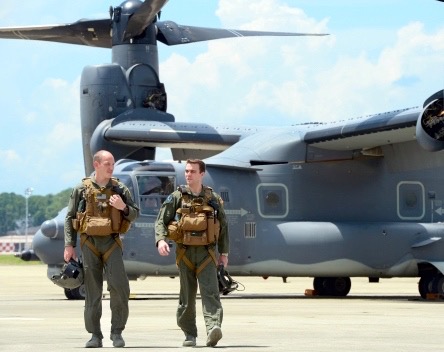 When three CV-22s were riddled with 119 rounds of AK-47 and .50 caliber fire as they tried to land at Bor, South Sudan, 18 months ago to evacuate U.S. citizens from a civil war, four Navy SEALs in the lead Osprey were wounded. Now a Florida company is providing the program office at Naval Air Systems Command (NAVAIR) with composite armor that can be installed in the back cabin to protect passengers inside the largely composite fuselage.

The NAVAIR program office is also trying to make the troop transport safer for pilots who fly the tiltrotor in formation, where the part helicopter, part airplane’s side-by-side rotors can create unique turbulence.

“Even though the first flight of this aircraft was back in 1989, you’re still learning new things about the aircraft,” Marine Col. Dan “Smokey” Robinson, the Osprey program manager, told an American Helicopter Society International briefing in Virginia Beach this month.

“That is a reaction to the incident that occurred in South Sudan,” Robinson said, referring to the Dec. 21, 2013, action where three CV-22s were hit, wounding the four SEALS and forcing all three Ospreys — whose crews had been told they would be flying into a “permissive environment” – to divert to Entebbe, Uganda. 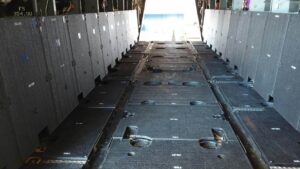 The Protective Group, a Florida company that specializes in composite armor, worked with NAVAIR and the Army Aviation Development Directorate to devise the solution, a kit of 66 armor plates sized to fit along the Osprey’s interior bulkheads and deck. The kits were developed in 179 days and delivered Oct. 8.

“That kit can be installed and taken out of the aircraft as required,” Robinson said, “in a matter of hours.” But there is a penalty that goes with the better protection. When all 66 plates are used, they add “about 800 pounds to the aircraft,” he said. NAVAIR has delivered 16 of the $270,000 Advanced Ballistic Stopping System kits to the Air Force. The Marine Corps, whose MV-22s have also taken heavy fire in combat, could also order the kits but hasn’t yet, a NAVAIR spokesman said.

Robinson’s office has also been working to better prepare Osprey pilots for the unique effects of the tiltrotor’s wake turbulence “based on documented cases of dynamic roll-off in formation flight and some incidents that happened in either flight test, operational test or out there in the fleet,” he said. 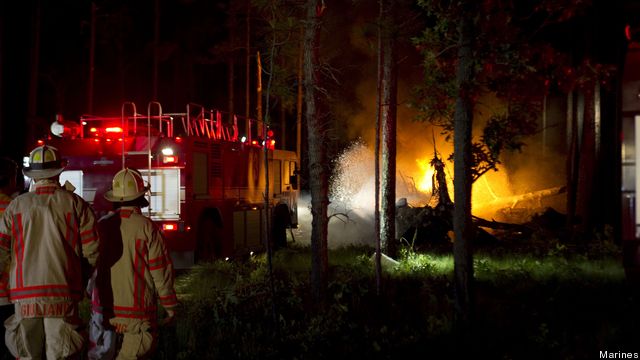 As Breaking D readers will remember, an AFSOC CV-22 following another suddenly rolled left and crashed into a stand of pine trees in June 13, 2012, at Eglin Air Force Base, Fla. The $78.5 million aircraft was destroyed and the five-man crew injured. An investigation found that the pilot inadvertently flew into the rotor wake of the other Osprey even though he was following by what the flight manual described as a safe distance. The pilot “did not maintain the required 25 feet of vertical separation” the report said, (emphasis added), when the lead pilot made an unexpected turn while flying in helicopter mode.

That accident suggested inadequate understanding of the wakes created by the Osprey’s unique wingtip rotors, which swivel upward to let the aircraft take off and land like a helicopter and forward to let it fly like an airplane.

Robinson showed a video of the tests, in which HX-21 Test and Evaluation Squadron pilots at Patuxent River Naval Air Station flew nine level and eight turning “wake encounters” in Ospreys equipped with smoke generators to map the rotor wake and where the roll-off hazard lies. The planes’ flight software will be changed to make it easier for pilots to recover from roll-offs — a process expected to take another year — and the test results will be incorporated into Osprey simulators so pilots can train for the phenomenon.