The 76-Day (Pink?) Truck: Vyper In, Lockheed Out Of Army’s ULCV Race 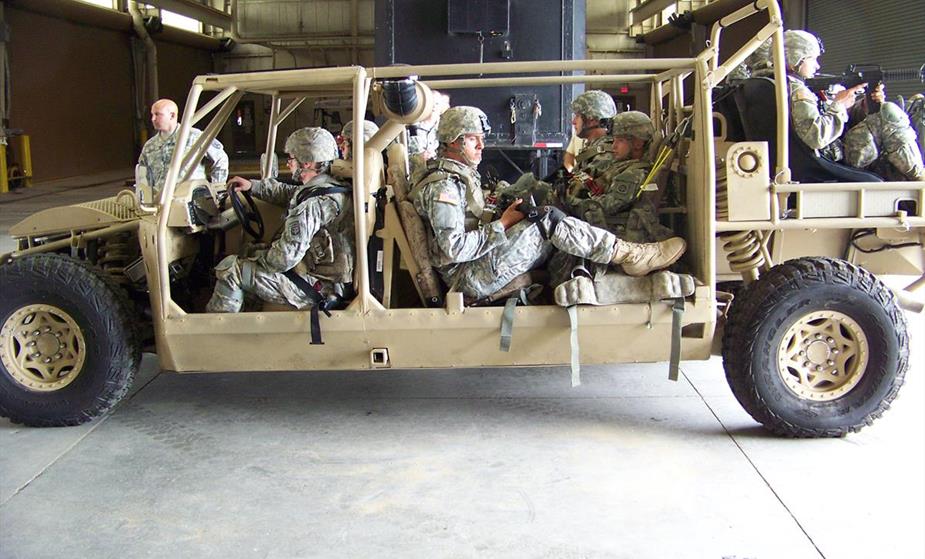 Want a pink truck?  “If a colonel says, ‘I want to paint it pink,’ it’ll get painted pink in about five minutes,” boasts Shane Sterling, president of Vyper Adamas. That’s the kind of speed with which smaller companies can move, he says: “We don’t have the levels of bureaucracy that a lot of these (big defense) companies do.”

It’s not just about paint jobs. When the Army launched its Ultra-Light Combat Vehicle initiative to build air-droppable trucks for the 82nd Airborne, most larger companies naturally offered existing designs, more or less modified to meet the Army’s needs. “We built a vehicle from the ground up,”  Sterling said.

From trucks to software, the Pentagon is pushing beyond the cloistered world of huge defense contractors and reaching out to innovative small businesses around America. The Senate Armed Services Committee just passed a bill to ease the military’s of non-traditional contractors. But how does that play in practice? ULCV is a great test case, with the biggest and most bureaucratic of the armed services trying out a mix of traditional defense firms, sizable commercial companies entering the defense space, and small businesses.

Vyper Adamas is a small company out in Carson City that builds fast vehicles for special operators — and, if its Vyper V4X wins the ULCV race, for the regular Army as well. It’s up against companies like Polaris, which built more than a million off-road vehicles for the commercial market in the last five years, and General Dynamics, a defense industry giant best known for the 70-ton M1 Abrams tank and the 20-plus-ton Stryker.
UPDATE: However, we’ve learned that the biggest defense company of them all, Lockheed Martin, will not compete, although it was widely expected to, having submitted a modified British vehicle for last year’s Army trials. “Sydney, ULCV is a business opportunity Lockheed Martin chose not to pursue at this point,” Lockheed spokesman John Kent told me this afternoon. The company offered no more details.

Unlike these large firms, Vyper is closely held and doesn’t divulge its revenues or number of employees: “We’re big enough to get the job done,” said Sterling.

Vyper doesn’t name its prior customers either, but they’re not just limited to special operators, which historically are far more flexible in how they buy things. “We have done all types of procurement,” Sterling said, including some unpleasantly bureaucratic ones. ULCV, however, is “nothing near as painful.”

Lt. Gen. H.R. McMaster would be glad to hear that. ULCV and its sister programs, the Light Reconnaissance Vehicle and Mobile Protected Firepower vehicle, are part of McMaster’s drive to reform Army acquisition, starting with the drawing-up of official requirements, a laborious and frequently botched process. After the cancelation of three big ground vehicle programs in a row over 15 years — the Crusader howitzer, the Future Combat Systems, and the Ground Combat Vehicle troop carrier (not to mention the Comanche helicopter) — the Army is desperate to modernize at a price it can afford and at a pace that actually gets new gear to soldiers soon.

The Army also asked for the maximum use possible of commercially available parts, which minimizes development time and maintenance costs. “We’re going to be about 85 percent COTS [commercial off the shelf],” said Sterling. “You can go to a Ford dealership or a Dodge dealership or a whatever and pick up that part and get it fixed.” That’s a small step for a supply clerk, one giant leap for military logistics.

This approach isn’t risk free. In contrast to Vyper’s all-new vehicle, for example, competitor Polaris emphasizes that its ULCV offering is a known quantity in service with Special Operations Command. Nor will off-the-shelf parts suffice for many programs more complex than an offroad truck. But for the military in general, and the Army in particular, it’s long past time to take some risks with new approaches.