Air Force Gets Tough With Boeing, Withholds $360 Million From KC-46 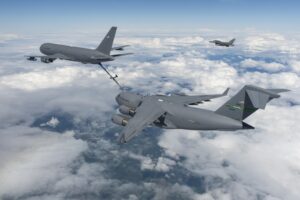 “The Air Force is withholding payments to protect our interests and incentivize Boeing to deliver KC-46s that meet all specification requirements in the contract,” the Air Force said in a statement. “To date, the Air Force has withheld approximately $360M from Boeing for KC-46s delivered so far.”

Breaking D readers will remember that the latest problems with Boeing’s KC-46 involve slack policing of Foreign Object Debris (FOD) on the Seattle production lines. But they aren’t the only problems. When the Air Force announced it accepted delivery of the first KC-46 some 17 months late in January, it also declared that it might withhold up to $28 million per plane until Boeing fixes the crucial Remote Vision System, a combination of sensors and cameras which allows the boom operator to connect the tanker to the plane that needs gas. Sadly, the Rockwell Collins system doesn’t work well in certain light conditions.

So far, Boeing has delivered 13 tankers and that $360 million withholding works out to just under $28 million per plane. Kudos to my colleague Marcus Weisgerber who first reported the news.

Boeing really couldn’t say much, could they? Here’s what spokesmen Todd Blecher offered: “We continue working with the Air Force to deliver the highest quality tanker.“

These KC-46 withholdings come as the Boeing company is being hammered by the grounding of its 737 Max fleet after 346 people died in crashes involving two of them. When the company released its earnings today, it reported having lost $5 billion due to the crashes.