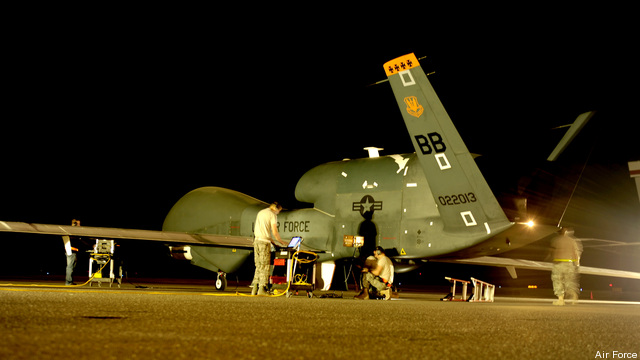 [UPDATED with Lt. Gen. James comment] WASHINGTON: Northrop Grumman is in talks with the the Air Force to keep the service’s 18 “Block 30” Global Hawks flying through at least September 2013, Breaking Defense has learned. That’s a win for Northrop and its backers in Congress over Air Force budgeteers who wanted to ground the long-range drones.

The service’s 2013 budget plan would have mothballed the Block 30 variant of the Global Hawk to save money, arguing that the venerable U-2 spyplane could better meet theater commanders’ needs for reconnaissance. (Other Global Hawk variants with different capabilities, Block 20 and Block 40, were never in question). That idea was resoundingly rejected by Congress — and quietly questioned by some in the military who appreciated the Block 30’s capabilities, including much longer flight times than any manned aircraft could endure. So, in his confirmation hearings, new Air Force Chief of Staff Gen. Mark Welsh told Senators that the drones would continue to operate. But Northrop Grumman’s existing contract to support Block 30 operations around the world was set to expire at the end of this month.

Now the Air Force has issued a formal Request for Proposals to extend Northrop’s support for the Block 30 fleet for a year, through September 30, 2013. That should give the Air Force plenty of time to figure out whether it will keep the drones indefinitely or try again for Congressional approval to retire them.

The exact price is still in negotiation, but it’s a sole-source contract with Northrop and its team of subcontractors as the only contenders. The scale is worldwide. Typically, there are nine aircraft forward at any given time: three each in Europe (flying out of Sigonella, Italy), the Pacific (Guam), and Central Command (undisclosed). Five more planes are normally back in the US at Beale Air Force Base in California for training, maintenance, and upgrades. The Northrop team has personnel at all four locations.

Under separate contracts, Northrop continues to upgrade the existing Block 30s, which were originally delivered with electro-optical, infra-red, and radar sensors but lacked a planned signals intelligence capability, which is now being fielded. Concerns over the sensors were one of the major arguments against the aircraft.

Four more Block 30s are still in production; their delivery would bring the fleet to 18. The purchase of three more — for a total of 21 — was authorized by Congress but has been in limbo since the Air Force cancelled the program. At various points the service had planned to buy 31 to 42 Block 30 drones, but with tighter budgets, it’s been a battle just to keep the already-built aircraft funded and flying.

Without an authorization bill passed by both chambers, “we don’t have firm guidance from Congress right now,” said the Air Force’s deputy chief of staff for intelligence, Lt. Gen. Larry James, in answer to Breaking Defense’s questions at the Air Force Association’s annual conference this afternoon. From the legislation and discussion on the Hill so far, “the intent of Congress so far in general is they would like us to keep flying the Global Hawk Block 30 fleet, so right now we are planing to continue to fly them until we get definitive guidance from Congress.”