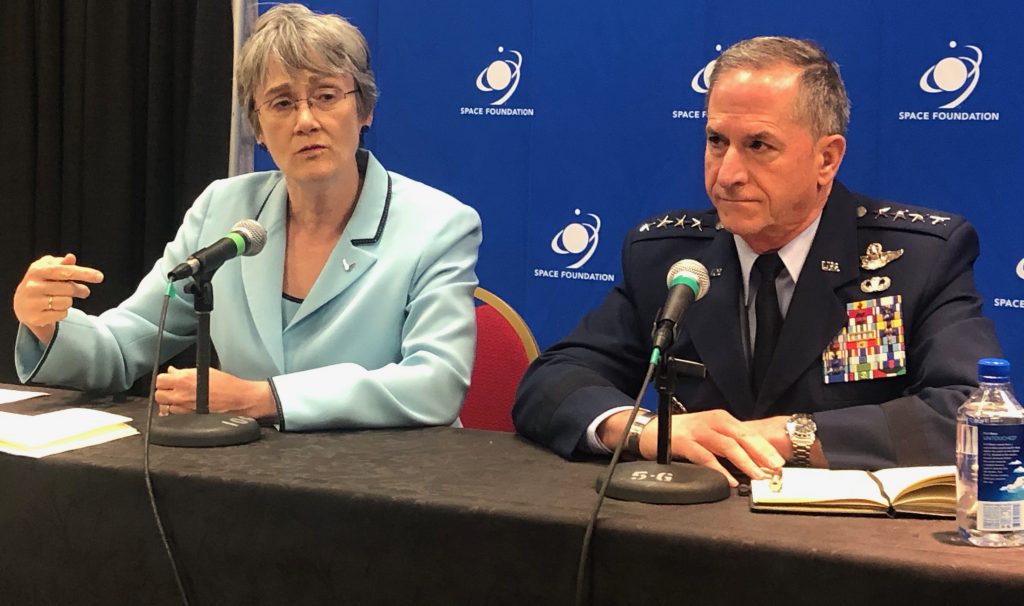 SPACE SYMPOSIUM: We got a glimpse into the Pentagon’s new space strategy when Air Force Secretary Heather Wilson said that the US may “demonstrate some capabilities so our adversaries understand that they will not be able to deny us the use of space without consequences.”

This is the first time I can recall a senior defense official openly discussing using a new weapon in space (whether it’s aimed at something in space or is in space is impossible to determine from her comment) to send a clear message of deterrence.

In what appeared to be unscripted comments in response to a question — but probably weren’t — Wilson started off saying: “There are certain things we don’t discuss publicly about our capabilities.” Then came the stinger: “There may come a point where we demonstrate some capabilities so our adversaries understand that they will not be able to deny us the use of space without consequences. That capability needs to be one that’s understood by your adversary. They need to know there are certain things we can do, at least at some broad level.”

And Wilson’s kicker: “The final element of deterrence is uncertainty.” So, Russia and China. Keep your telescopes, radars and other sensors highly tuned. Keep practicing your RPOs (Rendezvous and Proximity Operations) and prepare to be alarmed and puzzled by something new and interesting the United States is cooking up.

The US has increased its space control spending substantially over the last three years, as Breaking D readers know. Much of it is classified, so we don’t have much insight into what’s being done. A fairly quick scan of the 2020 budget documents did find this intriguing tidbit, a program referred to as Bounty Hunter:

“Bounty Hunter (BH) supports the Defensive Space Control of US systems in a specific AOR and provides the capacity to prevent effective adversary use of Command, Control, Communications, Computers, and Intelligence (C4I). Continuing yearly spiral development is needed to meet new user needs in an ever changing threat environment.” The unclassified costs are pretty small, in the low single millions, but it does sound intriguing, doesn’t it?

Brian Weeden, a space warfare expert at the Secure World Foundation, cautioned against presuming that “this will be some sort of in-space or even offensive demonstration. It could be a test of an advanced non-kinetic capability or some kind of active defense against co-orbital ASATs. I’m not sure how much deterrence value there would be in demonstrating an offensive capability against a Russian or Chinese satellite, given that neither rely on satellites anywhere near as much as the US does.”

That last is a point worth making. We still have much more to lose in space than does any other country precisely because our capabilities are so advanced and diverse.