Air Force Will Shift Up To $30B For Space, Multi Domain

Posted by Theresa Hitchens on September 17, 2019 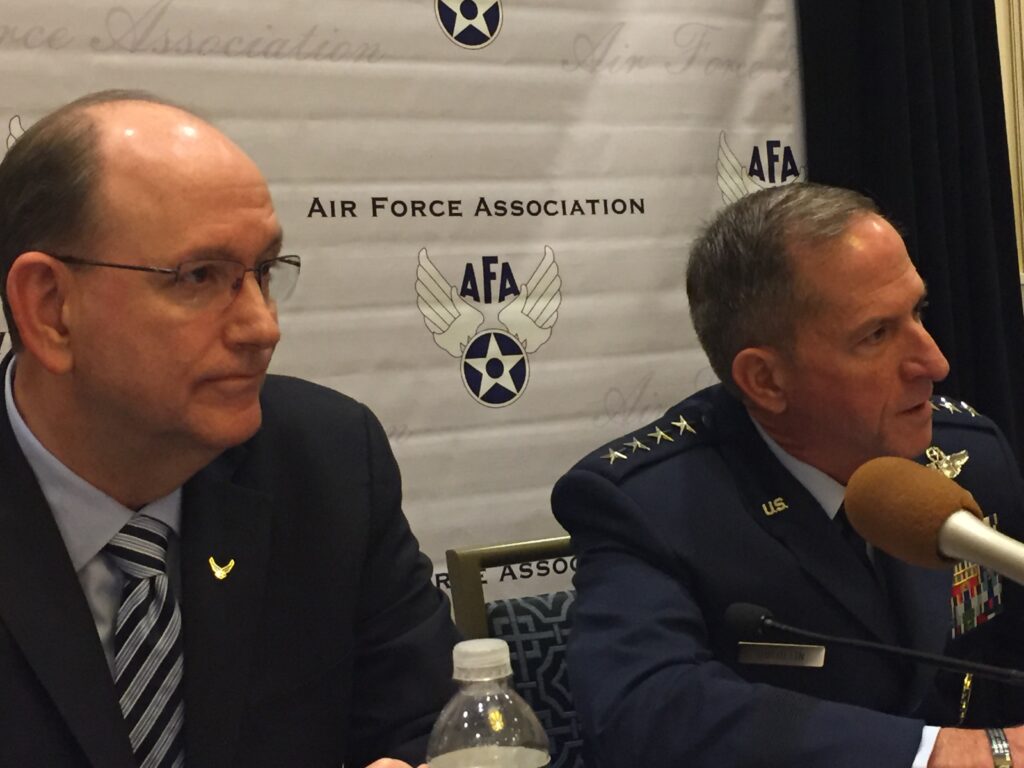 AFA 2019: The Air Force’s version of the Army’s famous Night Court has found up to $30 billion in weapons money it will take and reinvest it in Multi-Domain Operations and space warfighting capabilities, the top two Air Force leaders say.

Acting Air Force Secretary Matt Donovan told reporters here today that the service drilled down into the budget via its “zero-based review” — an exercise to scrutinize programs across the board for their continued relevance to the National Defense Strategy and the Air Force’s future mission. Donovan explained that the zero-base review process was the Air Force equivalent to the “night court” exercises initiated by Defense Secretary Mark Esper when he was leading the Army.

“We submitted our POM to OSD for the FY21 budget year and FYDP. I don’t want to give a number out now as that could change due to program and budget review as we go through the year. Because remember, it’s our proposal to OSD, the secretary of defense gets a hack on it; then from there it goes to the White House and the Office of Management and Budget and they get a chop on that too. But I could say it is substantial.”

When pressed, he said it was “pretty much the same ballpark” as the size of the Army reprograming, which saved the service some $33 billion over the future years defense program (FYDP).

Gen. David Goldfein, Air Force Chief of Staff, indicated that the service’s focus on Multi-Domain Operations (MDO) is driving new thinking about the size of military aircraft fleet — although he was quick to voice his continued support for the “365 squadrons by 2030” goal set in the service’s 2018 “The Air Force We Need” roadmap.

But, Goldfein said, future concepts of operations — “how we intend to fight” — also will “make some adjustments on those numbers, because … the more we can connect as a force, the more we can leverage all the different capabilities the services can bring to bear as we’re solving military problems.”

MDO is an ambitious call for a digitally orchestrated symphony of operations across all five domains of war — land, sea, air, space, and cyberspace. Instead of a strict sequence of operations, in which airstrikes blast a path for ground forces, the idea is to seize fleeting advantages in domains as they present themselves, then use those victories to open the way for operations in the other domains.

During his speech today, Goldfein showed a video featuring a recent wargame: Suppose US ground forces lose communications because a crucial satellite is being jammed by an enemy satellite. To restore communications, instead of trying to shoot the enemy jammer out of orbit, maybe the best countermeasure is for Air Force F-35s to bomb the enemy’s ground control center so they can’t control the satellite. But before the planes can fly in, maybe you need Army artillery to destroy an enemy anti-aircraft battery.

The Air Force sees itself as a logical leader for this kind of complex all-domain integration, in large part because of its experience in coordinating air and space operations worldwide. “As the air component commanders of the world, the CFACs, we are uniquely positioned to integrate domains and capabilities, and we’re often the ones tasked to pull it all together,” Goldfein said. Thus, building capacity for multi-domain command and control (MDC2) is one of Goldfein’s top priorities.

Therefore, it should not be a surprise that Goldfein told reporters that one of the key areas of 2021 investment is space. Enthusing that it “is a pretty exciting time to be in the business of space superiority,” he noted that the service is putting “resources toward the three tasks that I believe define the way ahead,” that include “defending what we have because its going to be there for a long time;” making a “shift toward a defendable architecture in all of the orbits” and away from large, exquisite satellites that Gen. John Hyten has referred to as “fat, juicy targets;” and “transitioning the development of our space warriors” to prepare them for operating in a contested domain.

When we asked him whether than meant more spending for so-called “active defense” capabilities, he said emphatically: “Yes!”

As we reported earlier this week, defining “active defense” operations — and distinguishing those operations from “offensive counterspace” — is a murky area that will require Gen. Jay Raymond and his Space Command to rethink current space warfighting plans and doctrine.

That said, Goldfein made clear the Air Force is not itching for a confrontation in space. “But make no mistake…if in fact a war starts or extends into space, everyone loses,” Goldfein told the AFA conference. “I don’t see any winners.”

With regard to other potential spending top ups, Goldfein said that he was “100 percent” in lockstep with the recent spate of analyses on the US bomber fleet that show a need for more than “the 100 B-21 requirement as a minimum.” While he deferred to talk about the 2021 budget for bombers prior to Esper’s decision-making, he did say that while he didn’t know if it was possible to accelerate production of the B-21, “I’m hoping to accelerate in numbers.”

Goldfein said that in order to possibly speed B-21 production, the Air Force might have to retire some of the B-1 bombers that are simply falling apart from stress, “and then flow that money into doing some key things within the bomber portfolio.” This could include new spending on “long-range strategic precision weapons; B-52 re-engining—which not only keeps the B-52 viable, it also decreases our tanker requirement,” and buying B-21s faster, he explained.

Sydney Greenberg contributed to this story.