Make Northrop Work With Us On GBSD: Boeing To Hill, Air Force 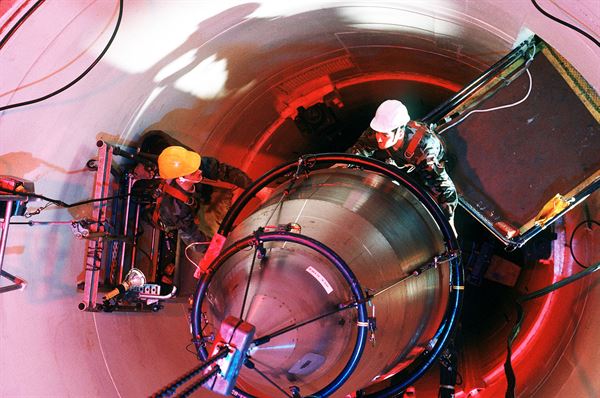 AFA 2019: When does a company not want to bid on a program, isn’t wanted by the only company still bidding on the program but wants to be a part of something it calls a national team?

When it’s Boeing eyeing work on the Ground Based Strategic Deterrent (GBSD). Boeing is pressing the Air Force and members of Congress to help them get that work. Northrop Grumman announced its team Monday. Defense giant Lockheed Martin is on it. All these companies are on it: Aerojet Rocketdyne, BRPH, Clark Construction, Collins Aerospace, General Dynamics, Honeywell, L3Harris, Parsons and Textron Systems.

But Boeing, having declined to bid on GBSD, still wants to work on it and pressed Northrop to let the two companies work together. Northrop said no. Boeing actually issued this statement last Friday: “In our discussions to date, Northrop Grumman has expressed that they are not interested in partnering with Boeing to form a best-of-industry GBSD team. We are increasingly concerned that the Air Force’s deterrence mission and the nation’s security will be deprived of the best solution — a proven approach that leverages both companies’ technical strengths and decades of ICBM experience.”

So, having been rebuffed, Boeing went on the offensive today here. “We think clearly it’s time for the Air Force and other governmental entities to engage and direct the right solution. Northrop has chosen not to do that,” Frank McCall, Boeing’s director of strategic deterrence systems, told a cluster of reporters. “We certainly are advocating our position with stakeholders of all types.” He would not be drawn on which members of Congress were likely to support Boeing. So far, the only one publicly known is Sen. Doug Jones of Alabama. Boeing employs about 2,900 workers in Huntsville, Ala.. Northrop Grumman’s GBSD work will be done in Utah, although it employs almost 1,500 in Huntsville.

Are there others, reporters asked McCall: “There may be others, but I’m not going to speak to them.”

McCall refused to be drawn on whether Boeing would protest a contract award to Northrop Grumman, saying he thought the “long term benefits to the government are so substantial” from a national team that he wasn’t even considering that the government would refuse to do it. “There is, however the opportunity for the Air Force to fix solutions across the weapon system that provide the lowest risk, lowest cost and highest performance.”

He pointed to Boeing’s work on ICBM guidance systems and work building bases for missiles as proof of the value Boeing could bring to the enterprise. When my colleague Aaron Mehta asked if Parsons — a company on the Northrop team — hadn’t worked on the silos, McCall challenged us to “count how many Parsons’ parts”  we could find that were used in the silos.

In its release on being named to the Northrop team, Parsons noted that:

“Parsons also designed the original infrastructure system and provided engineering services for the original 1,000 Minuteman III ICBM launch facilities and launch centers in 1961.” So it’s not likely we’d find many parts used since they did design work and engineering…

My favorite line from today’s press engagement with McCall: “The idea that competition is going to give us the best price is not viable in the current state.”