Air-Sea Battle: What’s It All About, Or Not 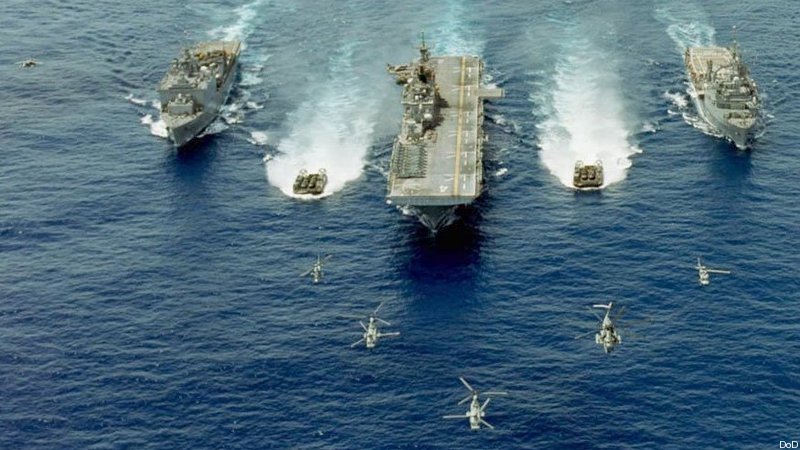 Pentagon: If you ever wanted to be left nonplussed, you would have been well advised to attend the press conference about Air-Sea Battle.

We were told yesterday afternoon by three clearly intelligent defense officials that their new office — staffed by 15 people — would be a “focusing lens” for the services. Exactly what they would be focusing was a tad hard to discern, but it clearly had something to do with fighting against governments (China et al) and proxy governments (like Hezbollah) that can use long-range precision weapons to try and stop the American military from entering and holding territory (military terminology for this is anti-access and ant-denial).

When folks at the Pentagon speak in redolent riddles — as this group did — and have a high profile, it often means their work is highly classified and/or might create diplomatic problems. Given that DoD went to the lengths of having someone from the OSD POlicy shop on hand to answer questions, it seems a safe bet this group’s work crosses both thresholds.

I spoke briefly with one of the officials at the end of the press conference in hopes of getting some clarity as to their mission. I mentioned Hezbollah’s successful use of Iranian anti-ship missiles in July 2006 and asked if this was the sort of problem that Air-Sea Battle is designed to address. The answer: yes (oh, and by the way, this person said it’s “frustrating” not to be allowed to use specific examples). One of my colleagues, Sam LaGrone of Janes, also came up with an example during the Q and A. He mentioned work between the Navy and Air Force about using A-10s to defeat small swarm boat attacks on Navy ships. This was accepted as an example of just the kind of thing Air-Sea Battle might help the military focus on.

But one of the things that made the Air-Sea Battle discussion so opaque was the fact that much of the discussion centered on what the new office charged with pushing this concept is not. We learned it is a not a strategy, not a concept of operations, not an assault on the services’ authorities and is not directed at any particular country.

So a gaggle of the nation’s top defense journalists got together after the discussion and tried to figure out what the hell it all really meant. I’d like to say we achieved great clarity. We didn’t. We were all left groping for a clear and coherent explanation we could offer readers for Air-Sea Battle.

After discussions with several defense civilians and uniformed types, I think the best way to describe this effort is to say that the defense leadership is worried that after a decade of counterinsurgency operations the U.S. military has lost its focus on conventional warfare, especially the strike and counterstrike that drives much of a military operation. The Joint Staff has given its all — and is still giving its all — fighting and thinking about Iraq and Afghanistan, not to mention Yemen, Somalia, the Philippines, Indonesia, Malaysia, Colombia and all those other places special operators are combating terrorists and insurgencies. That means, as one of the defense officials noted, that the Air-Sea Battle folks concepts and understanding of anti-access and anti-denial warfare are more “state of the art” than the joint force.

Inside the Pentagon’s SCIFs these concepts and discussions may be crystal clear. If Air-Sea Battle is to become something fundamental to how our forces train, equip and fight its advocates must be unleashed to discuss their work with more specific examples and with greater clarity. Otherwise, Congress and many people wearing uniforms will be left scratching their heads and wondering just what the heck it all means.

By the way, the three defense officials told us that the Army will be invited to join the Air-Sea Battle work. After all, no one is more responsible for the bloodiest parts of anti-access and anti-denial operations. Given the Army’s participation, maybe we should rename this the Air-Sea-Land Battle Office. Or maybe just go with that old moniker — the Joint Staff? Hmm?