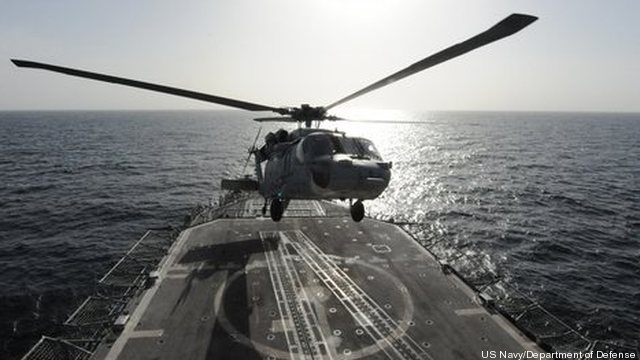 Patuxent River, Md: The Navy has increased its experimentation with its fleet of combat helicopters to see how they can work with unmanned aircraft.

The Navy recently flew Lockheed Martin’s new MH-60R Sea Hawk helicopter and the Northrop Grumman’s Fire Scout unmanned aircraft together in joint operations, deputy program manager Robert Kimble told reporters here yesterday, in what could the first steps in greatly extending the unmanned helicopter’s range. The early tests were designed to assess whether Fire Scout could connect with the Sea Hawk long enough to transfer intelligence collected by the drone, he said. The unmanned aircraft successfully transmuted images from its FLIR infrared camera to the helicopter’s crew.

Those tests come as the Navy is trying to get a new Sea Hawk multilayer deal approved on Capitol Hill. Navy leaders hope to have the plan included in the yet-to-be released fiscal year 2012 defense spending bill. The five-year deal would help the Navy build the final 100 R models of the helicopter, Kimble said. Reaction to the multimillion dollar proposal on the Hill has been largely positive, he added. Former Defense Secretary Robert Gates approved the multilayer plan last year.

While the Sea Hawk drills were focused on moving data from the Fire Scout, the success of those tests opens the door to further integration of the drone into MH-60R operations, according to Kimble. Sea Hawk crews could end up controlling Fire Scouts from the helicopter, according to Kimble. Naval Air Systems Command could build a Fire Scout command and control system for the MH-60R based on results from the data transfer drills, he said. To date, Fire Scout can only be flown from control centers on board surface ships.

Controlling Fire Scouts from Sea Hawks could end up expanding how far the unmanned drones could fly. The distance Fire Scouts can fly is limited by the range of their shipboard command and control system. Fly too far, and the unmanned aircraft loses connectivity with the ship. Stay inside that range and thousands of miles of open ocean are left unguarded. If Fire Scouts can be controlled by Sea Hawks they should be able to fly wherever the helicopters fly without losing connectivity. That means more miles of ocean covered by U.S. forces. The move could also eliminate command and control concerns for the newly armed Fire Scout.

But Navy officials still have a long way to go before Fire Scouts can be flown from MH-60Rs, Kimble warned. Navy engineers have yet to find a way to fit all the equipment needed to fly the Fire Scout into the MH-60R. Even if they could fit it all into the Sea Hawk, the helicopter doesn’t have enough power to run a Fire Scout control system and the HM-60’s systems simultaneously. “We’re working that issue,” Kimble said.