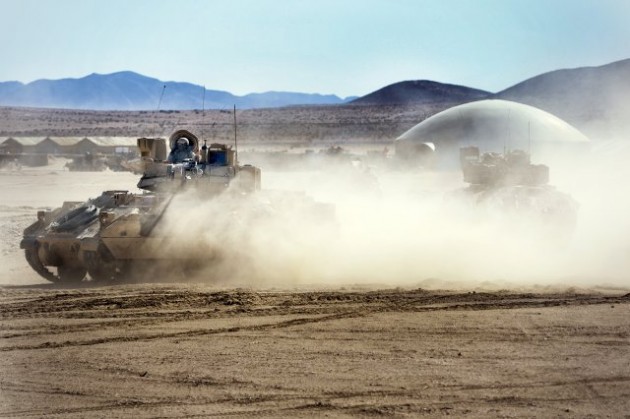 Army M2 Bradleys advance in a cloud of dust at the National Training Center on Fort Irwin, California. Dust, mud, and vegetation all complicate the use of high-tech sensors in ground combat.

WASHINGTON: As the Army races to modernize against the Russian threat, it’s adapting countermeasures used on aircraft to protect its armored vehicles from anti-tank missiles. Systems like BAE’s RAVEN jammer, which won a recent Army “rodeo,” could be a lot more effective than just bolting on another layer of armor on already overloaded vehicles — if the contractor can make what originally an airborne system rugged enough to function in in the mud, dust and clutter of ground combat. 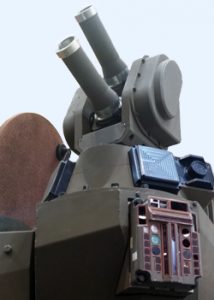 We’re talking high-tech hardware here. RAVEN is a “soft kill” jammer that tricks missiles into missing. It would part of a second wave of upgrades to Army vehicles, following the Israeli-made “hard kill” systems – which physically shoot missiles out of the air – that the service is already urgently fielding. The Army wants both types for maximum protection.

But going high-tech comes with risks and costs, as a candid interview with BAE revealed. It’s all the dilemmas of the Army’s troubled modernization system in microcosm.

The ugly truth is that ground combat is brutally hard on high technology, in different ways than air warfare. For example, the vibration on a moving armored vehicle is actually gentler than on a helicopter in flight – until you start shooting. (In Vietnam, the main gun on the M551 Sheridan light tank could recoil so hard all the electronic cards popped out). There’s more moisture, mud, and dust. And even if nothing breaks, the sensors have to see through a lot more clutter at ground level than in the air. 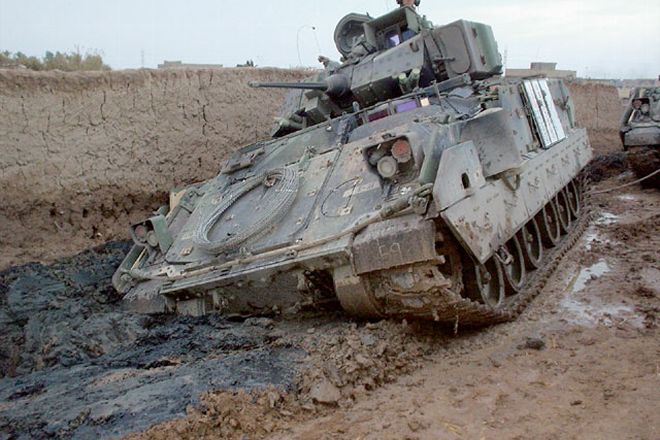 M2 Bradley in the mud

Down In The Mud

“We’re on a path to ruggedize it for that [ground] environment but we aren’t quite there yet,”  BAE executive Ryan Edwards told me. “That’s probably the main reason that we say RAVEN is only TRL 5.”

That’s on a Technological Readiness Level scale from TRL 1 (basic principles observed) to TRL 9 (proven in combat). TRL 5 means the components have all been proven to work in a realistic environment, but not yet as the complete system. 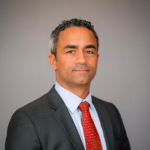 The core technology that RAVEN uses to trick missiles into missing – which he can’t divulge — is well-proven on military aircraft, Edwards told me. The hard part is adapting that tech to the ground.

“Having been on a Bradley, before you’d be surprised at how high the mud can get on a combat vehicle, said Edwards, a former Army officer who deployed to Iraq in 2005-2006 with the National Guard. “In an environment like the deserts of Iraq or Fort Bliss or the National Training Center, there’s a lot of dust…. and there’s also tree branches and shrapnel and things like that that you have to protect these systems from.”

“We have a pretty well known and deep history of aircraft platform protection and the RAVEN countermeasure is our attempt to adapt some of that… at a price point … that make it more relevant for ground combat vehicles,” Edwards said. “We’re still working closely with the customer to determine what is the best way to ruggedize that capability and make it reliable enough for a combat vehicle.”

How long will it take?

“The whole system could easily be mature…within 24 months,” Edwards told me. 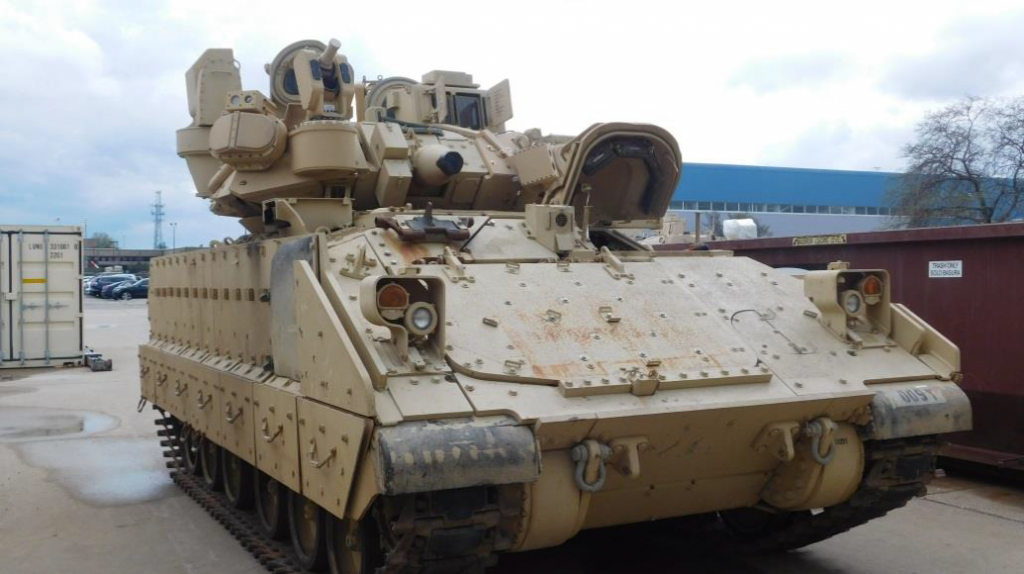 The version of RAVEN that outperformed all comers in Army tests last fall included both the active countermeasure itself and four infrared cameras to detect incoming threats from any angle. Those cameras feature high definition (1920×1200), a wide-angle field of view (120 degrees), and the ability to see smoke, dust, and vegetation by using long-wave infrared. (Short-wave IR gives a more precise picture, but it doesn’t penetrate clutter as well, making it easier for the enemy to hide).

However, the Army wants multiple ways to detect a threat, in case one fails, so BAE is working on additional sensors: a more precise medium-wave infrared (MWIR) camera and a radar. Those are less mature than other parts of the system, Edwards admitted. 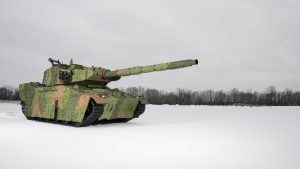 The long-wave IR camera is about TRL 6 (prototype demonstrated in a realistic environment), he said. Since it’s also going on BAE’s proposal for the Mobile Protected Firepower (MPF) light tank, where it helps the driver navigate around obstacles, that camera should be fully ready in 12-15 months, presuming funding comes through. However, the jammer itself is TRL 5 (as mentioned above), the radar is also about TRL 5, and the medium-wave infrared is only TRL 4 (components proven to work in the lab, but not yet in realistic conditions).

BAE is also working on “slew to cue” software that would automatically turn the turret and point the gun at whatever fired the missile, allowing the vehicle to retaliate before the enemy gets off a second shot. (Trophy has similar, albeit less automated cuing feature). It’s even testing algorithms to detect hostile vehicles and infantry missile teams before they fire the first shot, allowing the RAVEN-equipped vehicle to take cover or shoot first.

All that said, RAVEN doesn’t need to track an incoming missile precisely to defeat it. Though BAE can’t confirm details, that’s probably because it broadcasts a wide beam of electromagnetic interference to scramble the missile’s targeting system and make it miss, what’s known as a “soft kill.”

By contrast, “hard kill” systems like the Israeli-made Rafael Trophy and IMI Iron Fist fire physical projectiles to destroy the incoming missile, which means they need a radar to track it accurately. The Army wants both.

Why? Soft-kill systems work as long as the vehicle has electrical power, but they don’t work on every threat, since some missiles are too sophisticated to be tricked, and old-school unguided threats like RPGs have no guidance system to trick at all. Hard-kill systems require physical ammunition, which weighs down the vehicle and can run out – but if they hit an incoming missile, however smart or dumb it is, they’re going to smash it.

Soft-kill is the first line of defense, Edwards told me, because it never runs out of ammunition. That way you can save your limited, bulky hard-kill ammo for the roughly 30-50 percent of threats that might make it through the jamming.

MAPS To The Future

Coordinating the hard and soft-kill systems will be the Army-developed Modular Active Protection System. MAPS happens to built around a processor that Lockheed Martin originally developed for the Apache helicopter – another example of aircraft tech coming down to earth.

The Army’s ultimate goal: a plug-and-play open architecture – hence the “Modular” in MAPS – that they can easily upgrade with the latest sensors, hard-kill countermeasures, and soft-kill systems, from whatever vendor offers the best tech at the best price. Currently it’s kludging together systems from different manufacturers, each of which comes with its own sensors, effectors, mounting brackets, etc. That all takes up a lot of space, weight capacity, and electrical power on Army vehicles already overburdened by 40 years of upgrades. 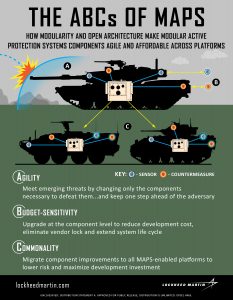 On the M2 Bradley in particular, “you have to turn off certain systems in the combat environment, because there just isn’t enough power to run everything,” BAE executive Ryan Edwards told me in a candid interview. Integrating multiple sensors and countermeasures into a single system should save both power and weight, he said.

But RAVEN and its wider suite of systems isn’t just for the Bradley, Edwards emphasized. “We’re not designing this specifically for a given platform,” he told me. “We try to keep it lightweight and modular so the Army can decide what platforms and what formations [it] makes sense for.”

That’s another advantage of soft-kill systems. Since they don’t require bulky physical ammunition like hard-kill countermeasures, you can put them on lighter vehicles. Potentially, Edwards said, you could make RAVEN light enough to go on even a four-wheeled armored truck like the venerable, vulnerable Humvee or the new, tougher JLTV (Joint Light Tactical Vehicle). That’s an option that could dramatically cut casualties in both major war and counterinsurgency – if the Army can afford enough systems.