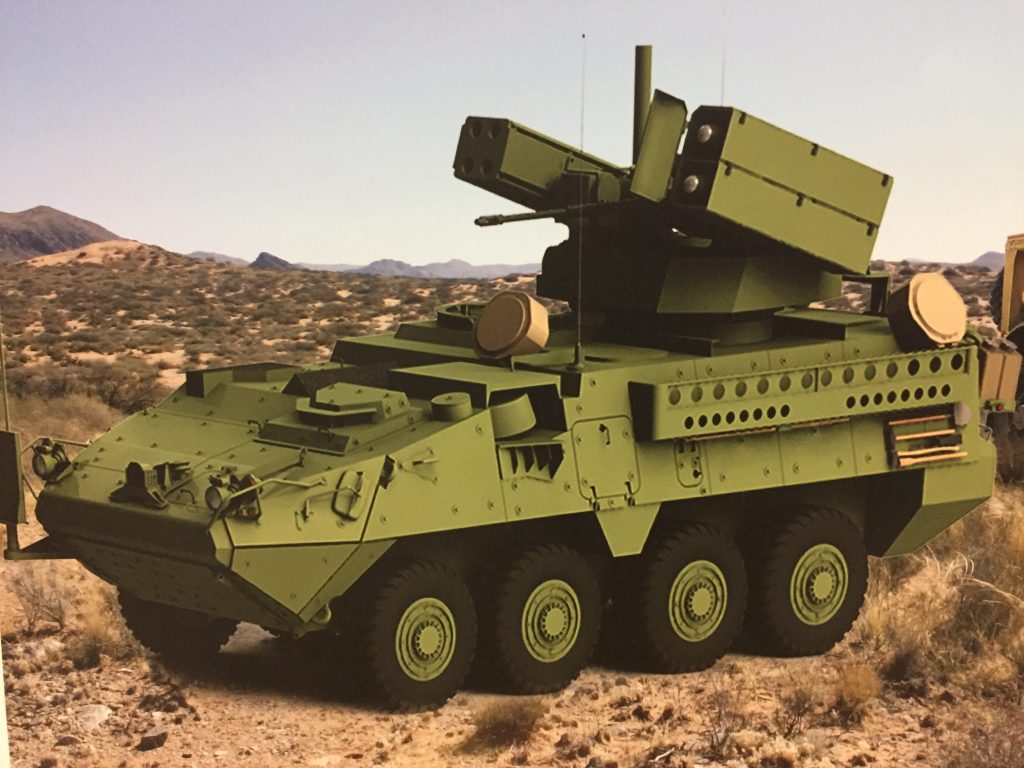 Anti-aircraft Stryker variant chosen by the US Army: 4 Stinger missiles on one side, two Hellfires on the other, with a 30 mm autocannon (and 12.7 mm machinegun) in between (Leonardo DRS)

With its eyes firmly on Russia, the US Army is racing to field 8×8 Strykers with an array of weapons that can down enemy aircraft — from drones to helicopters to jets — and incidentally make enemy tanks think twice. The first prototypes will be delivered next year, with up to 144 (four battalions) by 2022, although the contract details are still being negotiated. 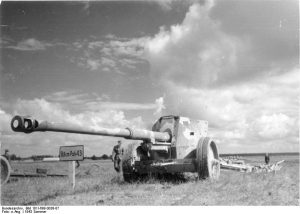 Now, before everyone gets too excited, this doesn’t mean the new Stryker is a substitute for the Bradley as an infantry assault vehicle. The Stryker’s got lighter armor, and wheels instead of tracks, so it can’t handle all the threats or terrain a Bradley can. Plus, this variant’s interior volume will be largely filled with spare missiles, leaving little room to carry troops.

But it does raise intriguing tactical possibilities for IM-SHORAD Strykers to take up positions right behind the frontline forces — ideally on hills with good fields of fire — to provide both air defense and long-range shots against enemy armor. It’s similar to how the German’s famous 88mm high-velocity cannon of World War II did double duty as flak gun and tank killer. 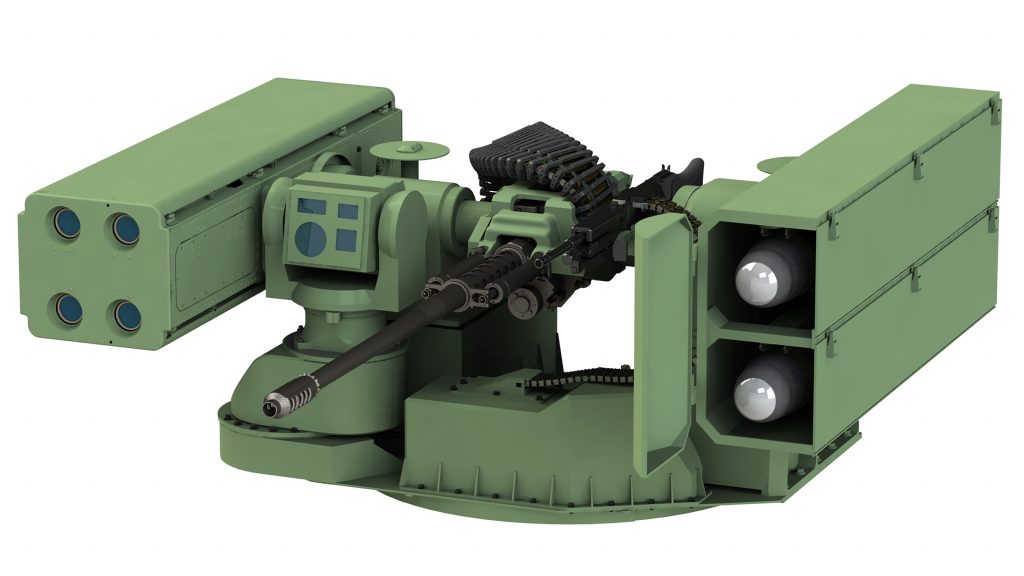 Close up of the Moog Reconfigurable Integrated-Weapons Platform (RiwP) turret for the anti-aircraft Stryker:: 4 Stinger missiles on one side, two Hellfires on the other, with a 30 mm autocannon and coaxial 12.7 mm machinegun in between (Leonardo DRS)

Put together by Leonardo DRS and then installed on the Stryker by the vehicle’s original manufacturer, General Dynamics Land Systems, the package includes an intimidating arsenal of weapon — and the flexibility to add more:

What’s more, the weapons are all mounted on a multipurpose unmanned turret, Moog’s Reconfigurable Integrated-weapons Platform (RIwP, pronounced “rip”), which House said could take a wide range of alternative layouts as technology, tactics, and threats evolve. It could also be adapted to other vehicles, with Leonardo having tried a counter-drone version on an M-ATV truck.

“It takes us about four hours to put the RIwP turret on an M-ATV,” House told me. While they’ve haven’t put one on a Stryker yet, once General Dynamics preps a Stryker — which includes cutting the appropriate hole in the top armor — “it won’t be any harder to mount it on the Stryker.”

The loaded turret weighs less than the TOW missile turret already installed on the Stryker’s anti-tank variant, he said. (By contrast, a rival proposal from General Dynamics and Boeing involved a much larger turret that would have required cutting off the back half of the Stryker’s cargo bay). 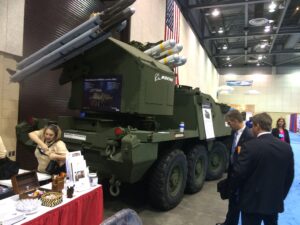 With the turret installed and loaded, the vehicle has two Hellfires and four Stingers ready to fire and more would be carried in the hull. The three-man crew should be able reload the Stingers and the 30mm without leaving the vehicle, although they’d be partially exposed in an open hatch. The Hellfires, however, are simply too big and heavy to fit through the hatches, so the crew would have to get out and clamber on top of the vehicle to reload those. That’s an awkward operation under fire and another reason the IM-SHORAD Stryker shouldn’t hang out in range of enemy machineguns alongside the Bradleys.

If fewer or no reloads are needed for a particular mission, House said, some or all of the Stryker’s cargo/passenger area would be available for supplies or troops. But with Short-Range Air Defense identified as one of the Army’s glaring shortfalls against a modern adversary like Russia or China, the IM-SHORAD Stryker probably won’t have much time for odd jobs. 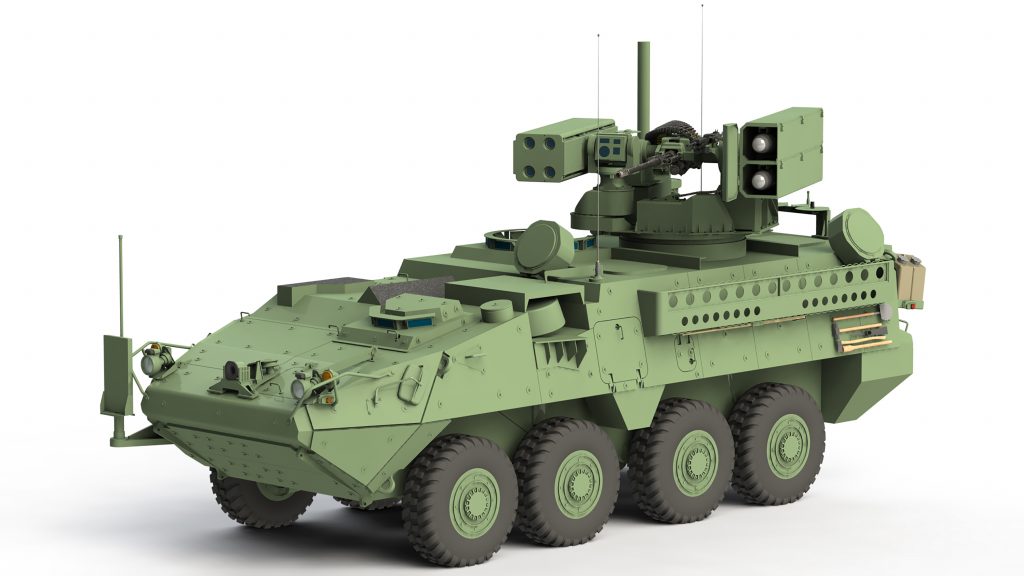 Anti-aircraft Stryker variant chosen by the US Army: 4 Stinger missiles on one side, two Hellfires on the other, with a 30 mm autocannon (and 12.7 mm machinegun) in between (Leonardo DRS)

The Army is rushing to fill multiple gaps in Europe, not just air defense. It’s developing a new scout helicopter and adding Trophy Active Protection Systems (APS) to its M1 Abrams heavy tanks to protect them from Russian anti-tank missiles. But while armored brigades of M1 tanks and M2 Bradleys regularly deploy to Europe, the heaviest force stationed there permanently is mounted on Strykers. So the Army is rushing to upgun these relatively lightweight armored vehicles with anti-armor weapons from 30 mm cannon to Javelin anti-tank missiles, as well as the effectively dual-purpose IM-SHORAD package.

How fast is that schedule?

At this point the Army may either keep upgrading IM-SHORAD — note it’s called the “initial” solution, not the “interim” one as is sometimes reported — or choose another system. Different missiles, improved electronic warfare, and entirely new weapons such as lasers are all options, with 50 kilowatt lasers planned for 2023.