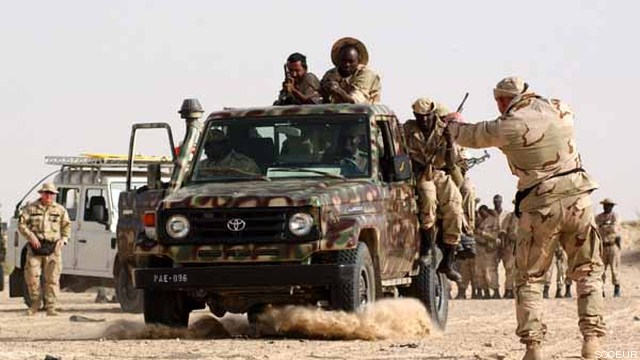 Many inside the Beltway feared the mission, in which American special forces would support Ugandan forces in their war against the Lord’s Resistance Army, could be a first step into a protracted conflict in Africa.

But advise and assist missions like the one in Uganda may become the new normal for the U.S. military, as the Pentagon tries to find a way maintain the military’s global presence in the face of massive budget cuts.

These types of missions, by and large, are much cheaper to conduct compared to full-blown combat operations. They also allow U.S. forces to retain footholds in a number of global hot spots without sustaining and having to pay for a large force presence.

To that end, the Army is preparing to send out its first “regionally aligned brigade” to Africa Command in fiscal year 2013. That force, roughly the size of a brigade combat team, will be primarily tasked with training and assisting foreign militaries. It will be the first of several the Army hopes to create over the next few years. These brigades will be the first regular Army units designed to do partner nation engagements.

Advising foreign militaries has traditionally been the job of U.S. special operations forces. American special forces have worked with militaries all over the world on counterterrorism and counterinsurgency missions.

But with the growing demand for American-led military assistance missions, U.S. special operations forces are having trouble keeping up, a defense analyst with knowledge of these missions said.

U.S. special forces will still be responsible for the more intense military assistance missions, like the Uganda operation, that require the special skills they can bring to the table.

But other missions, such as basic military training and learning how to coordinate fire support with troop movements, can and should be done by regular Army soldiers, the analyst said.

Anticipated cuts to the Army’s end strength, as a result of debt reduction measures called for by the White House, will definitely factor into how big a role the Army takes in training partner nation forces, the analyst added.

The Army is busy trying to figure out which military assistance missions will be done by special forces and which ones will be done by the regular Army, service officials involved with those talks told me at the U.S. Army Association’s annual conference here last week.

However, those officials agreed that military assistance operations — whether led by special forces or the Army — will be a big part of what the U.S. military does in the future.