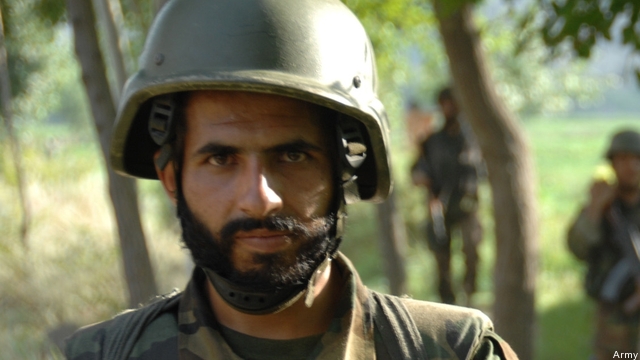 ARMY AND NAVY CLUB, WASHINGTON: “The biggest concern of my great Afghan security force partners is abandonment,” said Maj. Gen. James Huggins. “We have invested a great deal [in Afghanistan] for a long time,” he said, “[but] the Afghans have done it three times longer than us.”

Speaking at an event this morning organized by the Institute for the Study of War (click here for video), Huggins recalled a conversation over chai with a veteran of the 1980s war against the Soviets, now a local governor. “Do you know why the Taliban come into power?” the old warrior asked him. “Because you left us too quickly after the Soviets withdrew.”

Not long after, Huggins said, the governor was killed by insurgents.

Huggins came back from Afghanistan in September, having commanded US and NATO forces in Regional Command South, the Taliban heartland around Kandahar. At the peak of the surge, RC-South had 25,000 troops: “When I left it was at 13,800,” Huggins said. “As we downsized, [I] told them that was the bare minimum we could use and still conduct the mission as described today” – that is, to advise and support both Afghan security forces and civilian governance.

Redefine the mission, as the US will after it ends its “combat role” in 2014, and you can get the numbers down. But how low?

“We could lose what we’ve gained so far if we withdraw too precipitously and we don’t support the Afghan government and the region,” said Lt. Col. J. B. Vowell, another combat veteran now finishing a fellowship at Stanford. His research project there is on future requirements for US forces in Afghanistan. “Just a few thousand soldiers, that’s not enough to secure yourself or do either security force assistance or counterterrorism very well,” Vowell said. But if you stay too high, he added, you may never force the Afghans to walk on their own.

“Security force assistance alone is not going to be the solution for Afghanistan; [it] can’t be in isolation,” Vowell told Breaking Defense after his public talk. “A political solution is key.”

Vowell said he saw some positive signs of such a solution in 2010-2011 in Kunar province, a mountainous and largely lawless region that serves as an insurgent rat line between their sanctuaries in Pakistan and the capital city of Kabul. But not all insurgents are created equal, and while groups like al-Qaeda and the Haqqani Network are hardline, and even the central Taliban leadership has been wary of negotiations, “the local Taliban, lower-case t, are involved in the process,” Vowell said. “They want to be part of that local process and they’re testing the waters.”

When Vowell sat down with local leaders, “everybody gets included in the tent in these meetings — and that means the Taliban,” he said. “So you’ve got meetings where a coalition commander in his Army uniform sits down, breaks bread, and knows there are Taliban in the room… [and] that’s ok.”

Maj. Gen. Huggins likewise touted progress during in his time in Afghanistan. “We saw a reduction in the time we were there of [about] 60 percent in violence” in the city of Kandahar, he said, where local police have taken over security with minimal assistance from a few Afghan National Army and federal police units. And during his year, US, Afghan, and allied forces pushed the “security bubble” westwards from Kandahar, pacifying the once bloodily contested Arghandab River Valley and making progress even in the Zhire and Maiwand districts, almost all the way to neighboring Helmand Province where the Marine Corps is deployed.

All told, compared to the near anarchy in Afghanistan when Huggins first deployed there in 2002, “you at least see the outlines of a good, strong central government,” he said, “you’ve got an army that is the most respected institution in Afghanistan, and a police force that is starting to shed that image of [corrupt, abusive] ‘gun lords.'”

There are still plenty of security problems, Huggins acknowledged, mostly prominently the “green on blue” attacks by Afghan security personnel on their American colleague. Huggins does not consider those attacks isolated incidents of personal animosity, but a deliberate insurgent strategy.

It’s “very deliberate,” Huggins said. “The attacks first and foremost are focused to drive a wedge between us and our Afghan partner,” Huggins explained. “There may be some that are random acts of violence just because of a cultural issue that came up that offended our Afghan partners, but that’s not the norm.”

All told, US forces will need to be in Afghanistan – and on guard – for a long time to come. “How does this end?” asked Lt. Col. Vowell. “I don’t know if it does. There’s an argument that there is no end state to problems like this…. For Pakistan and Afghanistan and the region, I think continued engagement, continued political engagement, is the long-term solution.”