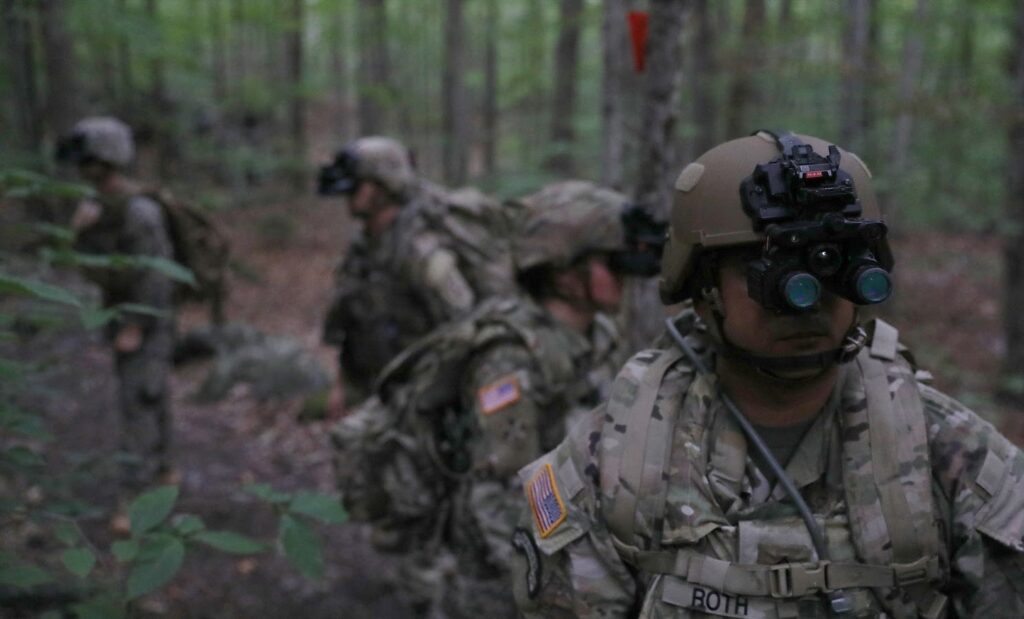 WASHINGTON: In the land of the blind, the one-eyed man is no longer king, because the Army is about to field new cutting-edge night-vision goggles that let the wearer see with both eyes.

The Army is buying some 10,000 of the binocular Enhanced Night Vision Goggles – Binocular (ENVG-B), which takes the capabilities of the monocular ENVG-III fielded this spring and adds depth perception. (That’s pretty handy in combat). 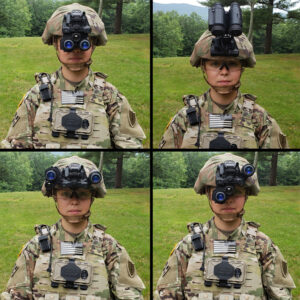 A soldier shows off the different configurations of the ENVG-B night vision/targeting goggles.

The new ENVG-B — being issued to the 2nd Armored Brigade, 1st Infantry Division at Fort Riley, Kansas on Sept. 23 — is the second generation of night sights to enter Army service in 2019 alone. The rapid advances in optics are part of a larger upgrade of the long-neglected infantry, from new high-powered rifles to VR training. That infantry revolution, in turn, is part of an urgent Army-wide modernization of everything from artillery to aircraft to armored vehicles.

Yet another upgrade, the Integrated Visual Augmentation System, is set to enter service in 2021. IVAS will not only add more digital features, potentially including artificial intelligence for target recognition: IVAS will also streamline the bulky ENVG headset into a smaller package — based on the Microsoft HoloLens — with better peripheral vision.

All three variants combine thermal vision (infrared) and low-light amplification (of visible wavelengths) in a single device; previously, soldiers had to switch scopes to get both perspectives. All three can also project a targeting cross-hairs in the soldier’s field of vision that shows exactly where their next shot would go, thanks to a wireless link with the advanced FWS-I gunsight on the soldier’s rifle. The user doesn’t even have to see the target with their own eyes: They can poke the rifle-mounted camera around a corner or out of a foxhole, get a live feed on their goggles, line up the cross-hairs, and fire with precision.

“Honestly, first time I saw [it], I was skeptical,” said the veteran non-commissioned officer who served as technical advisor on the ENVG-B, Sgt. First Class Will Roth, according to an Army press release this morning. “I couldn’t envision a time when soldiers would accept this product and trust it in the field.”

But that changed, the press release continues, when Roth attended his first field test with real troops, “where he watched a Marine lay on his back, fire over his shoulder, and hit targets at 50 and 100 meters.”

“He hit five out of seven,” Roth said, adding the sight gave him chills. “Nothing else offers these kinds of capabilities. I’ve seen it for myself, and I’ve heard it from hundreds of soldiers and marines.”

The Army’s technical advisor on the ENVG-B program, Sgt. 1st Class Will Roth (left), poses with one of the hundreds of soldiers who field-tested the system, Spc. Lucas Appleton .

Now, Roth’s experiences aren’t just a humanizing anecdote in a bureaucratic process. The Army spent a lot of time telling his story — and there’s more in the full release, which is so different from the usual bureaucratic boilerplate that we reproduced it in full below. Why?

Because getting real soldiers’ input on what new tech works and what doesn’t, early on in the development process when there’s still time to fix things, is crucial to avoiding the high-tech, high-cost disasters of past procurement programs. For ENVG-B alone, the Army’s Soldier Lethality modernization team held eight “Soldier Touch Point” events. All told, hundreds of Army and Marine Corps troops tested out the goggles in field conditions and gave their feedback to Army and industry technical experts on what to change.

That Roth — a 35-year-old enlisted man — was technical advisor on ENVG-B is also telling. The Army has just eight high-level Cross Functional Teams working on its top modernization priorities. Each is led by a one- or two-star general (or in one case, the civil service equivalent), who has a handpicked core team of a few dozen senior officers, civil servants, and technologists. Roth, the press release points out, was the youngest and lower-ranking person on the soldier-technology team.

Yes, American NCOs have long prided themselves on their ability to keep their commissioned-officer bosses out of trouble by injecting regular doses of muddy-boots reality. But it’s another thing to formalize and institutionalize this role, as with Roth.

Now, the Army’s rapid progress on soldier technology does build on years of prior research and development. Individual equipment is smaller, simpler to debug, and cheaper to build than the multi-million-dollar prototypes of new aircraft, armored vehicles, and robots the service is also working on. But even on those much larger projects, if the Army’s ambitious modernization plan is going to have a chance, it will require regular reality checks from combat-hardened grunts like Sgt. Roth.