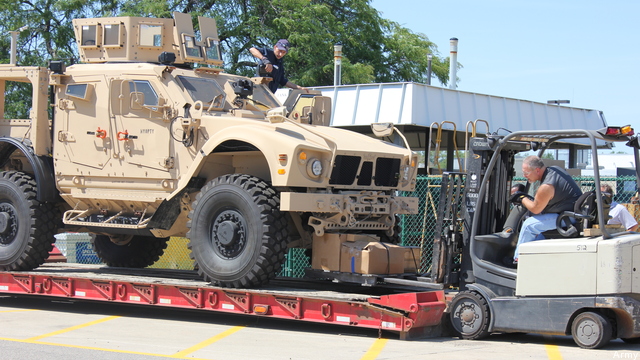 The Army’s new, streamlined approach to improving its battlefield networks took a big step forward this week when five MRAP armored trucks with the latest digital communications gear shipped out to be tested at Aberdeen Proving Ground in Maryland.

Testing at Aberdeen is the last major hurdle before fielding what’s called “Capability Set 13” to Afghanistan-bound soldiers of the 10th Mountain Division this October. It comes just six months after design work began on the vehicle upgrades and just three months after the proposed technologies underwent extensive testing in the New Mexico desert under the new “Network Integration Evaluation” process, which a recent Defense Business Board report held up as a model for more rapid acquisition of new technology.

The Army has suffered a series of major disasters trying to field an integrated command-and-control network, most notoriously with the cancellation of the Future Combat Systems program. Faced with those problems the service decided to build piecemeal upgrades. The “capability set” approach is meant to provide a toolbox of technologies already tested and proven to work together — but without making that toolbox so big and so ambitious it takes a decade to develop.

“What they were doing before was buying a lot of stuff in an uncoordinated fashion and getting it all to work together overseas,” one congressional staffer told Breaking Defense. “This time they’re trying to deliver a configured package that works when they get there.”

Congress has been supportive of the new approach, but the staffer predicted the Army would ultimately buy less Capability Set 13 equipment than the eight currently planned. The Army plans to modernize the force in installments, issuing more, further upgraded capability sets after 13.

The five vehicles now headed into testing are among the lightest and most mobile members of Mine-Resistant Armor-Protected (MRAP) family: One is a Navistar MaxxPro Dash, the other four Oshkosh M-ATVs (MRAP All-Terrain Vehicles). Each test vehicle is configured differently, but all the latest network systems are represented:

These first five “production representative” vehicles were built by Army’s Tank Automotive Research, Development and Engineering Center (pictured above) in Warren, Mich. The next 130 will be assembled — to identical designs — in Charleston, S. C. by the Navy’s Space and Naval Warfare Systems Command. Yet more vehicles will be converted from existing Army inventory in Afghanistan and provided to brigades on arrival.