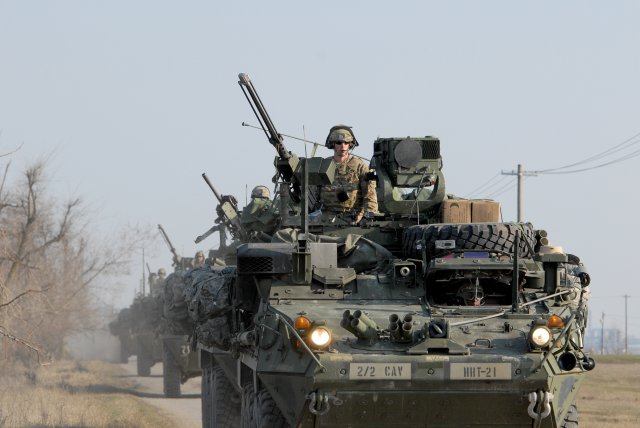 Upgunning the Europe-based Second Cavalry Regiment against the Russians is just the first of a “lethality upgrade” for the entire Stryker force. The 30mm quick-firing cannon for 2CR’s Strykers may ultimately go on half the Army’s fleet of the 8×8 armored vehicles (not counting specialist variants). The other half would get the a vehicular version of the Javelin, the military’s standard shoulder-fired anti-tank missile. Just as important, the Army wants to upgrade sights and sensors across the fleet — and it’s throwing the doors open to ideas from industry.

“We’re releasing a market survey tomorrow,” said Col. Glenn Dean, the Army’s Stryker program manager. “[It’s] intended to reach out to industry and involve them in a dialogue of what capabilities should we be considering beyond the things that were already on our menu.”

UPDATE Here’s the link to the survey, which asks about improvements to survivability, networks, logistics, and mobility as opposed to the main focus, lethality. UPDATE ENDS

The Stryker entered service in 2002-2003, just missing the invasion of Iraq, and since then upgrades have focused on improving armor against roadside bombs. Three of nine brigades have been converted to mine-resistant Double-V Hulls (DVH), and a fourth DVH brigade is funded — but there the uparmoring program ends and the upgunning begins.

The 30mm cannon was originally part of a larger concept for fleet-wide lethality upgrades before the 2nd Cavalry cherry-picked it for rapid fielding through an April 2015 Urgent Operational Needs Statement. (We broke that story last year). Dean told me and my Defense News colleague Jen Judson that the design work is well underway. The first $8 million contract with Stryker manufacturer General Dynamics was signed in September and expanded to $75 million in January, with prototype vehicles to be delivered this December and the first production vehicle next year.

The 2016 defense spending bill authorized $411 million to upgrade 80-some Strykers. That’s $5 million per vehicle, which some of my sources have called excessive.

Some $96 million is needed for research, design, testing, and evaluation, both of the modified Stryker vehicle and of the 30 mm weapon itself, including its ammunition. The cannon has been considered by cancelled programs like the Army Future Combat System and the Marine Expeditionary Fighting Vehicle but never previously fielded, so a lot of basic certification must be done. On the upside, this $96 million can be amortized over the entire Stryker fleet, not just one brigade, since it is necessary for the wider upgrade.

Then $312 million will go for 83 production vehicles, a more reasonable (but still significant) $3.76 million each. Is that the final number? The answer is no, probably not,” Col. Dean. Those estimates were all made quickly with a conservative margin of error, he explained, and “we are looking for efficiencies.”

General Dynamics has already cut the cost of the weapon and turret by about a third from the original estimate, Col. Dean said. Even more significantly, the original plan was to take essentially stripped Strykers — the bare chassis left over after a Stryker is converted from flat-bottom to double-V hull — and rebuild them into the new 30 mm-armed version. But it turns out the Army has enough complete vehicles to take surplus Strykers and just modify them to take the new turret, a much simpler proposition.

The broader package planned for the entire Stryker fleet will also have to fit in tight Army budgets. It will also probably have to do so without the kind of generous special funding Congress has provided for the 2nd Cavalry’s effort to counter Russia.

“We are limited by budget not by technology,” Col. Dean bluntly. How limited? “Right now, I’m not willing to put that number out there, I really want to get all the input I can” from the appeal to industry, he said, then see what the Army can afford of the ideas that come back.