An Army soldier interacts with a virtual comrade in an “augmented reality” simulation.

A fourth priority STE will try to preserve, she said, is the One World Terrain 3D mapping software that will replace the 57 different terrain simulations currently used, with an early version even being used on the battlefield by special operators.

Despite strong support from Army Secretary Ryan McCarthy, the go-fast effort to upend how the Army trains both at the individual soldier and unit levels may well face serious tradeoffs due to budget cuts — as both sides of Capitol Hill have taken a whack at the budget request. This includes figuring out whether program will be able to meet its “aggressive schedule” for initial operating capability in September 2021, Gervais told reporters today at the 2019 Association of the US Army (AUSA) conference. 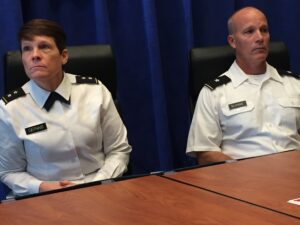 “Right now, we’re working on the marks,” Gervais said. “We working to ensure that we can stay on the glide path for FY2021. But the marks will impact our ability, depending on what comes out of the conference session.”

STE has become a poster child for the Senate Appropriations Committee’s wider displeasure about the massive budgetary reshuffling resulting from the “Night Court” process put into place between 2018 and 2019 by former Army Secretary, now Defense Secretary, Mark Esper.

The Senate’s version of the 2020 Pentagon funding bill lists STE, and its high-priority Integrated Augmented Vision System goggle project, among several other Army CFT efforts that have drawn concern because of multiple re-programmings since 2018. The Senate legislation complains: “Continued, wide-ranging truncation or elimination of programs without notification to the congressional defense committees in advance of the subsequent budget submission leads to inefficiencies and misappropriation of resources in the current budget request being considered.”

To crack down on what it sees as budget bingo, the Senate cut a whopping $79.64 million from the STE prototyping request of $136.76 million, to $57.12 million. The House, by contrast, only cut some $25 million from the request, down to $111.78 million. The Senate also zeroed out the Army’s request for an additional $20 million for “restoring acquisition accountability” in the program.

“The Army senior leadership, on the secretary’s side and on the Army side, they know the value of this,” said Brig. Gen. Mike Sloane, program executive officer for simulation, training and instrumentation. “They are fully engaged, as are General Gervais and myself. We’re fully engaged with senior leaders, congressmen and congresswomen on the Hill to make sure they understand the impacts.”

Sloane said that the Initial Operational Capability date might not be the only thing that might have to be traded away, depending on the size of any cuts. Instead of delaying the IOC, the Army might stick to the schedule but scale down the effort. “Does that mean it’s one installation less against the initial operational capability? Where is the trade space there?” he mused aloud. However, he warned, “at some point in time, when you trade things away, you do not have a capability.”