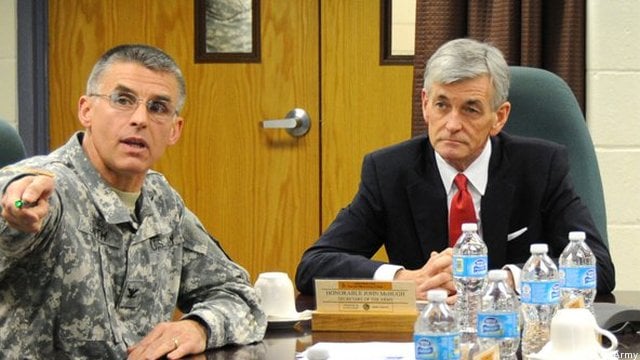 [UPDATED 2:15 pm]WASHINGTON: Between sequestration, shutdown, and the Continuing Resolution, it’s been a brutal year for the federal government, especially the Army. Alongside training, maintenance, and morale, most of the service’s conferences have been hammered: “I’m surprised any of us is here,” Army Secretary John McHugh said this morning in his opening remarks to the largest service’s largest conference, the 2013 annual meeting of the influential Association of the US Army.

The irony is that AUSA 2013 is doing remarkably well. The press room is packed, the industry exhibit halls are full, and attendance is topping 2012’s. (That said, 2012’s conference was smaller than 2011’s). 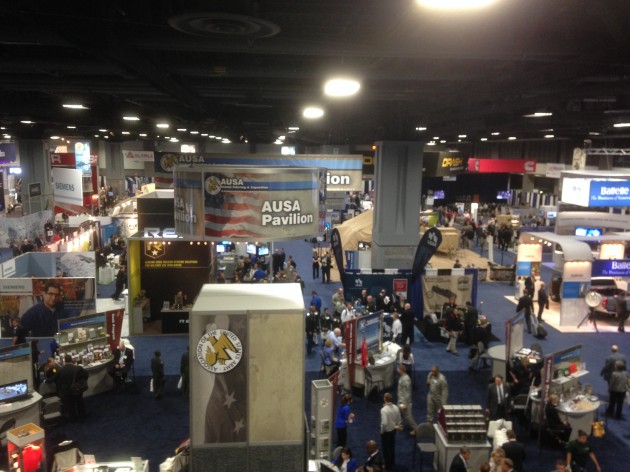 “We’re ahead of the game,” AUSA spokesman David Liddle told me this morning over a hastily grabbed bagel. As of the last time the association ran the numbers, about a week ago, pre-registrations had passed the 25,000 mark, an improvement on last year’s numbers even though the fiscal and political situation keeps getting worse. Said Liddle, “we didn’t have a government shutdown last year, and we’re beating those numbers.”

AUSA’s success suggests the Army as a profession and its contractors are hanging in there. But that doesn’t make the service’s overall situation any less dire.

“Last year, you may remember I crashed my bike and fractured my pelvis,” said McHugh, who attended AUSA 2012 in a wheelchair. “This year the government shut down.” Of the two, he said, the shutdown was more painful.

That’s especially true because the shutdown came on top of last year’s steep sequestration budget cuts and three years of pay freezes for civil service employees. As the service shuffled money from one account to another in a desperate effort to meet its most urgent needs, said McHugh, “we were forced to rob Peter to pay Paul — and then Paul got furloughed.”

It’s been bad enough for political appointees like McHugh and for uniformed soldiers, but the damage to civilian morale has been even worse. Given that, McHugh said to loud applause, “we are blessed that like those who wear the uniform they have stuck with us.”

Unfortunately, of course, sequestration has stuck around as well. McHugh noted the service was preparing two budgets for 2015 and two POMs, the Program Objective Memorandum that serves as a five-year spending plan, one reflecting full sequestration — still the law of the land — and the other assuming the President’s budget survives intact. (The best plausible outcome is probably somewhere in between).

Meanwhile, though the shutdown is gone and unlikely to return, the government is still running under what’s called a continuing resolution rather than proper appropriations bills. That means federal agencies can’t sign new contracts, start new programs, or stop spending on items they’ve decided are a waste. The result is the exact opposite of what fiscal hardliners in Congress intended: “Things cost us more and take us longer to get,” said McHugh.

“It’s certainly better than the alternative of no dollars…. but it’s dollars in the wrong place,” McHugh elaborated when I asked him about the continuing resolution at a press conference after his formal remarks. Because the CR basically tells the government to keep spending on autopilot at last year’s levels, with a few exceptions here or there, he said, “that’s really funding your previous year’s needs and requirements, not the current year’s.”

“[Between] the government shutdown and sequestration and CRs we’ve already impacted about 485 acquisition programs,” the Secretary said.

That puts a crimp in modernization programs in particular, McHugh said, and the start-and-stop, up-and-down funding makes it impossible to plan for either the Army or its suppliers.

“If you walk through this AUSA exposition,” McHugh told reporters, “you’ll see a lot of great industrial partners. They need some predictability so they can plot their way forward….To not know if the Army is going to have money in the right account or have legal authority to execute a contract…can be crippling.”

“We’ve had great uncertainty over the past two years,” agreed Gen. Ray Odierno, the Army’s Chief of Staff since fall 2011, at the same press conference. During his time as the Army’s most senior officer, Odierno fumed, there’ve been “no budgets, continuing resolutions, no planning, waste of money, wasteful programs.”

Worse yet, training cutbacks have gotten so bad because of the budget crisis that only two Army brigades are full trained and ready for any contingency that might arise outside of Afghanistan, Odierno said. (Click here for full article).

There’s no sign that Washington will get more efficient by this time next year. Let’s just hope McHugh doesn’t break bones between now and AUSA 2014.

Updated 2:15 pm with McHugh and Odierno comments from the press conference. 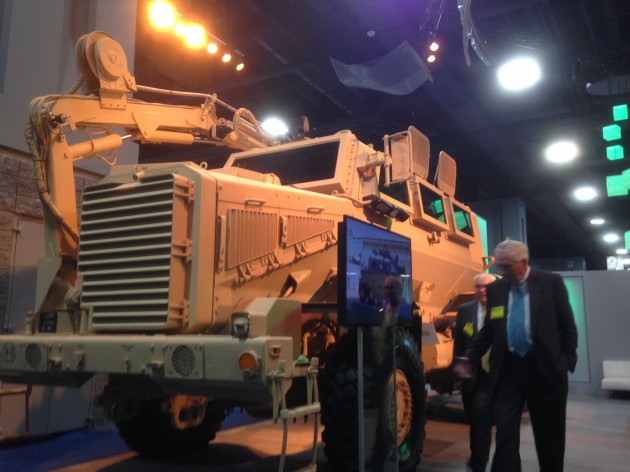 A Buffalo mine-resistant armor-protected (MRAP) truck on display at AUSA.