Behind The Curtain: Amendment To Limit JTRS Competition Fails 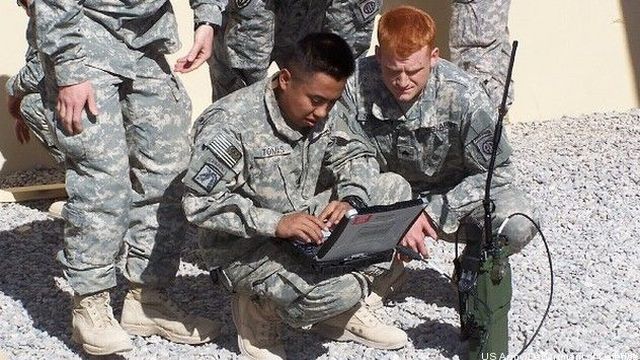 CAPITOL HILL: Several defense giants battled today over $500 million in 2013 funding for a radio program as the House defense policy bill headed to the floor.

The fight centered on two versions of the Joint Tactical Radio System, the Mid-Tier Networking Vehicular Radio MNVR (son of GMR) and the HMS tactical radio. Company lawyers parsed language of the amendment that appeared to guarantee General Dynamics would win all the business for the two radios, which are slated to get roughly $500 million in 2013. The bipartisan amendment was introduced by Rep. Dave Loesback and co-sponsored by Rep. Trent Frank. Members of the House Rules Committee, which must approve amendments, were relentlessly pursued by lobbyists from GD, we hear.

The amendment, which Loesback spokesman Joe Hand told me was withdrawn later in the day, said that the Army and Navy “may not procure tactical radio systems that depend on proprietary waveforms and have not been or are to procured through full and open competition.” General Dynamic’s main competitor for these radios is Harris Corp. General Dynamics spokesman Fran Jacques said HMS does not rely on proprietary waveforms. Harris does. And Harris is not the program of record and probably does not meet the standard of having been picked through “full and open competition.”

Conclusion: “I think the intention is to target Harris,” said an industry source familiar with JTRS.

A second industry source said the amendment clearly tries to restrict competition but also noted that it “is poorly written” and thus it was difficult to discern just what effects it would have.

A source with no dog in the fight but who is very familiar with the radios offered a careful assessment: “The amendment applies the restriction to radios that ‘depend upon’ proprietary waveforms, so it isn’t 100 percent clear what it would cover. The intent of the amendment appears to be to protect the JTRS program, by making it somewhat more difficult to procure Harris products (the most common tactical radio with a proprietary waveform, namely ANW2).”

The House Armed Services Committee included language in its markup of the defense policy bill that would fence 30 percent of the JTRS money until the Army Secretary, John McHugh, provides written certification that the plan for full production includes “full and open competition.” That would seem diametrically opposed to the language in the amendment. My bet is that senior HASC members believed firmly enough in their version of the bill and encouraged Loesback to do the right thing. And he did.

Phone calls and emails about the fight flew between this reporter, industry sources and folks on Capitol Hill throughout the afternoon. Best detail of the fight: General Dynamics reportedly buttonholed all eight Republican members of the House Rules Committee in their attempt to get this through.