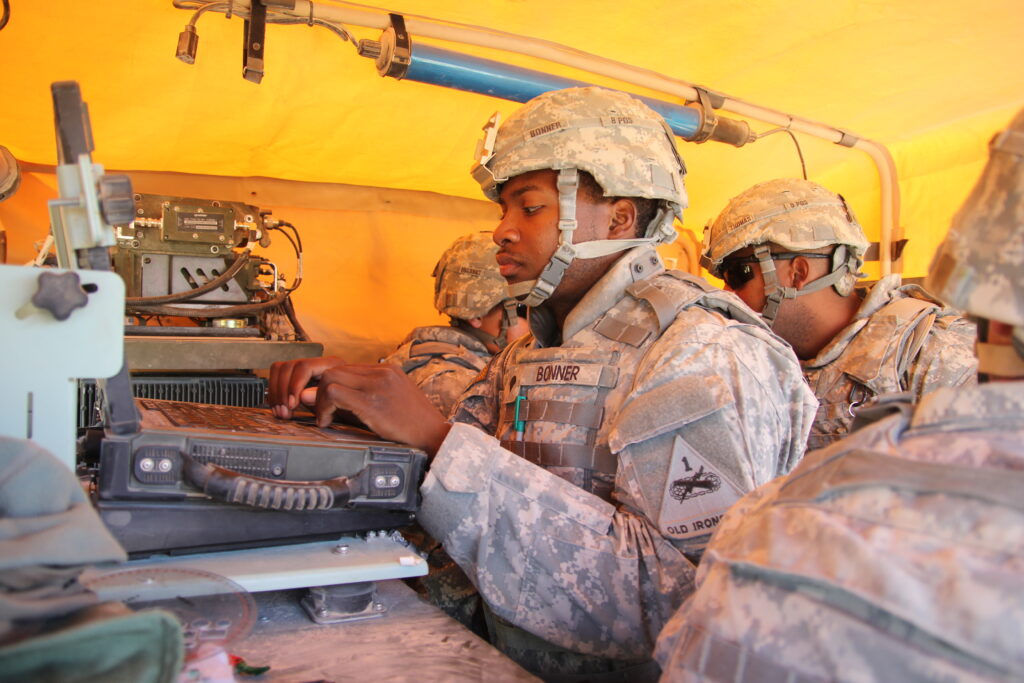 Army soldiers access the DCSG-A intelligence system during an exercise.

ABERDEEN PROVING GROUND: As the Army upgrades its intelligence analysis system, DCGS-A, it must confront the big data dilemma that bedevils all the armed forces as they refocus on high-intensity, high-tech war. Globe-spanning networks, cloud computing, and artificial intelligence could provide vital data rapidly to frontline units. But forward commanders must not become dependent on all that data, because hacking, jamming, or a well-aimed missile hitting a key network node can all cut off access.

“We certainly see many of the benefits of cloud — they are phenomenal,” said Brig. Gen. Robert Collins, the Army’s Program Executive Officer for Intelligence, Electronic Warfare and Sensors (PEO-IEWS), in a roundtable with reporters here on Friday. “A lot of my focus is on making sure … we’re ready and postured to be able to host into the cloud.” That includes both the intelligence community’s existing C2S, he said, and the proposed Defense Department-wide JEDI system.

At the same time, Collins continued, frontline troops must be able to function during prolonged periods when their data pipeline is cut off, just as they need to keep fighting when their physical supply lines are cut. “For all the goodness as we go into the cloud, we may have instances where we need an edge node or kind of a hybrid implementation,” he told reporters. “Just like you go into the battlespace with 72 hours worth of fuel” — and ammo, food, water, spare parts — “you may need an edge node that can give you 72 hours worth of data.”

So how is the Distributed Common Ground System – Army actually delivering on these principles? The “foundational layer” for future upgrades, Collins said, is a package of new hardware and software called Capability Drop 1 (CD-1). The Army’s already working on the next iteration, CD-2, with industry proposals due today.

The goal of CD-1 is to give battalion headquarters — which typically command a few hundred soldiers — the same kind of access to intelligence data as a brigade — which has several thousand. What’s more, the upgraded system is meant to provide that access on the move because battalion HQs rapidly redeploy to keep up with rapid maneuvers and evade enemy artillery, in contrast the lavishly networked but easily targeted permanent bases that the US built up in Afghanistan and Iraq.

Now, users won’t be able to access the full range of high-level intelligence databases without a network connection, Nguyen and his staff told reporters. But laptops will cache the latest downloads so soldiers can work with them off-line and update information the next time they reconnect. 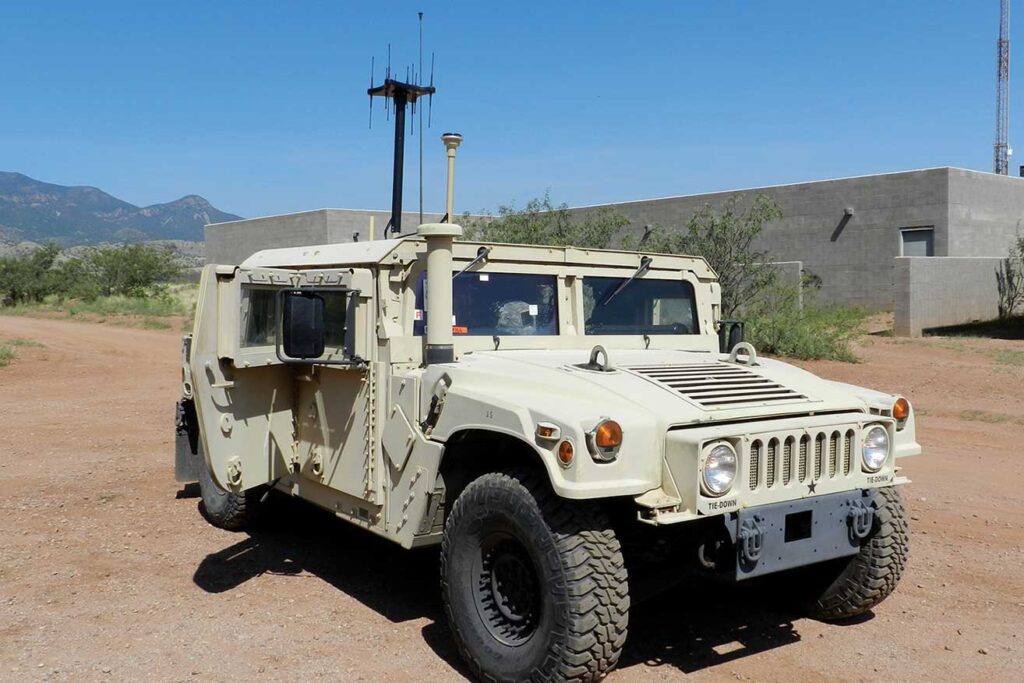 What might this mean in practice? Imagine you’re an intelligence analyst who’s feverishly working on an update for the battalion commander — and then everyone gets the order to pack up the command post and move. (This kind of rapid relocation rarely occurred in counterinsurgency, but in a great power war it would be required to survive). With the old version of DCGS-A, you’re out of luck as soon as they pack up that 480-pound server. With CD-1, you grumble, log off, jump in the back of a Humvee, and flip your laptop back open to work with your cached data as you ride to the new location.

(This is assuming your Humvee isn’t itself specifically rigged to connect to the DCSG-A network, like the one pictured above).

Sure, it’s uncomfortable and you don’t have the latest data. But you still have all your digital maps, automated terrain analysis for troop movements, automated analysis of forecasted weather effects on upcoming operations, reported friendly and hostile locations, and other essentials. Then, as soon as you reconnect to the wider network, you’ll get updates, like new unit positions or alerts that a High Value Target on your watchlist has been spotted.

What’s more, Nguyen’s team said, just because you lose access to one network, that doesn’t mean you lose access to them all. You’re much more likely to get cut off from global databases than you are from shorter-range, more tactical connections, like the AFATDS network that lets you point out targets for your artillery, or the DDS network with the rest of your battalion command post. Each battalion HQ will get three ruggedized laptops, which will synch data and act as back-ups for one another.

In the longer run, Collins said, the Army wants to expand frontline troops’ access to ever more data sources — most of them not operated by the Army itself. “The Joint Strike Fighter is going to be a phenomenal collector of intelligence,” Collins said. He wants future Army ground stations to be “like a Lego… a base building block that can be built upon” to connect to a wide array of joint aircraft and orbiting satellites, with artificial intelligence to help the operator make sense of it all.

“We have ubiquitous sensors and a tremendous amount of data,” Collins said. As he works with experts from across the Army on the service’s network modernization team, he said, “we’re all realizing it’s all about the data.”