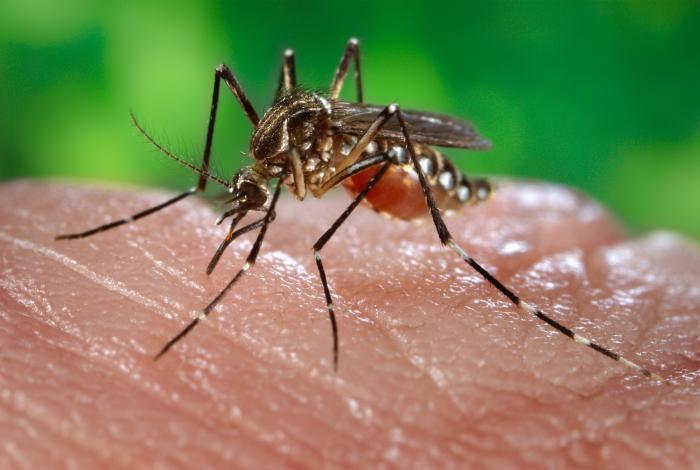 WASHINGTON: Sorry, Captain America fans: Defense Department scientists aren’t researching a real-world super-soldier serum. But they’re making progress on genetically engineered microorganisms that can detect and even repel a host of invisible threats to US troops, from radiation to poison gas, from environmental toxins to…mosquitos?

“Think about soldier survivability instead of super soldiers,” said Dimitra Stratis-Cullum, director of synthetic biology at the Army Research Laboratory, speaking at a Defense One conference this morning. By using engineered microbes, she said, which are tiny and need no electricity, instead of bulky battery-powered sensors, the military can infuse new sensors and defenses into soldiers’ uniforms without ever injecting a foreign substance into their bodies.

It turns out that mosquitos have been high on the US Army’s hit list since Maj. Ronald Ross discovered in 1904 that they were transmitting yellow fever, malaria, and other diseases decimating the workforce building a vital piece of strategic infrastructure, the Panama Canal. With war and terrorism festering in the warmer parts of the world, US troops still have to deploy to mosquito-infested areas, and the current protections are…crude.

“We’re not talking about soaking uniforms in DEET, which is toxic,” said Stratis-Cullum. “Can we actually create a barrier to repel and prevent insects from even infecting the soldier? We have some strategies to do that.”

For example, added Battelle scientist and DARPA alumnus Justin Sanchez, it’s possible to use the gene-editing enzyme CRISPR-Cas9 to alter a microorganism’s DNA so it exudes a volatile substance — i.e. an odor — that repels insects.

Then, continued Stratis-Cullum, you an infuse a soldier’s uniform with that microbe instead of an artificial chemical.

The Navy is looking at similar biotech protections, said Sarah Glaven, a Naval Research Lab biologist. Humans naturally produce the chemical melanin to protect their skin against solar radiation, and scientists have figured out ways to produce it artificially. But the best way to produce melanin, without messing with human bodies or industrial chemistry, is to get bacteria to make it, then infuse it into uniforms. 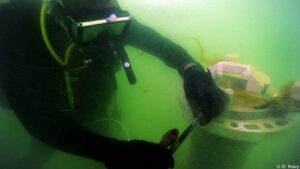 A Navy diver off the coast of Bahrain.

Microorganisms can also act as living sensors to protect Navy divers, Glaven told me after the panel. While the Navy’s increasingly investing in unmanned mini-subs, divers remain the best way to defuse floating mines or check ships’ hulls for the kind of limpet mines used by Iran in the recent tanker attacks. But putting a human underwater is inherently dangerous, and there’s currently no way to quickly test the water for toxins that might harm the diver — a real concern in polluted Third World waters or war zones where damaged ships leak all sorts of poisonous substances.

So Glaven and her colleagues are developing microorganisms that are sensitive to specific toxins and will rapidly react to their presence to warn the divers. If you engineer the bacteria to exude a conductive substance when they detect the threat, something that transmits electricity, that can close a circuit and trigger a warning light on a small, wearable sensor.

Such microscopic canaries in the coal mine could replace bulky sensors currently worn on divers’ suits or even test the water before any human got in it.

The natural world is already full of microbes that react to specific chemicals, radiation, or other stimuli in their environment, the scientists emphasized. These tiny organisms are effectively natural sensors, far more compact and precise than man-made instruments that often generate false positives. You could even surround a military bases with genetically engineered plants, said Sanchez, that react to environmental contaminants — say, a chemical weapon — in ways soldiers could notice before they strayed into a danger zone.

The sentry plants, of course, would live off water, sunlight, and dirt, none of which has to be brought to them by convoys of supply trucks. So far, the genetically engineered microorganisms tend to require regular infusions of sugar, but Glaven said her summer project is to start testing them in natural seawater. The goal, she told me, is a sensor that not only requires no batteries but sustains itself from the nutrients in its environment, with no need for logistical support, and can even regenerate itself when damaged.

Edited to clarify Dr. Stratis-Collum’s statement: The US Army is not going to soak uniforms in DEET.