WASHINGTON: In his first public remarks since being named the latest acting Secretary of Defense on Monday, Mark Esper implored Europe to spend more on defense, while delving into a new American proposal to contain Iran in the Middle East.

Esper, the third American Defense Secretary in the past six months — and the second to serve in an acting capacity — didn’t shy away from addressing the head-spinning churn at the Pentagon’s highest ranks, seeking to carry a message of consistency and continuity to the annual NATO summit in his first week on the job. 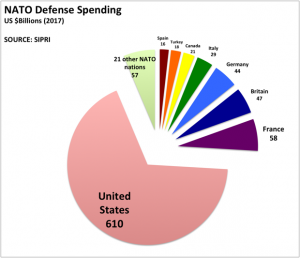 Esper jumped on the plane to Europe just 24 hours after taking over from Patrick Shanahan, who stepped down from the acting job due to a messy family situation. Shanahan took over from Jim Mattis, who resigned in protect in December after clashing with President Trump over the president’s plan to pull US troops out of Syria.

Despite President Trump’s pledge to nominate Shanahan in May, the official word never came down, leaving him in a protracted state of limbo and forcing him to audition for the job with each public appearance. Earlier this week, the White House said it intended to nominate Esper to become Defense Secretary, and David Norquist as his deputy. Those nominations have not officially been sent to Congress.

Shanahan had only managed to make it to a single NATO meeting before stepping down, a far cry from the regular continental jaunts Mattis would undertake every several weeks to keep in touch with allies and reassure them of Washington’s commitment to the alliance despite President Trump’s often petulant tweets.

On Esper’s first trip, he followed the lead of his predecessors by calling on NATO countries to spend more on their own defense, while taking the opportunity to wade into another geopolitical hotspot: the Arabian Gulf.

Blaming Iran for attacks on six ships in the Gulf as well as downing an American drone the Pentagon insists was operating in international airspace, Esper called on allies to “voice their opposition to Iran’s bad behavior.” He also pledged to come back in July to give members a detailed brief on the threat Iran poses.

“The purpose here is to avoid war with Iran,” Esper said. “What we want to do is to get this off the military track onto the diplomatic track, this could escalate out of control if we don’t get it back in the box.”

Earlier this week, Secretary of State Mike Pompeo delivered a vague outline for what he dubbed the ‘Sentinel’ program, which he said would put cameras on commercial ships in the Persian Gulf and engage allied navies to take a more active role in protecting shipping lanes that could be put at risk by Iran.

Esper today offered just a bit more, acknowledging that discussions with countries in the Middle East and Europe are just beginning. But, he said, the thinking revolves around “broader maritime surveillance, all the way up to a picket line of ships to protect international waterways to maybe even escorts.” The initiative doesn’t appear to be something Washington is looking to move out on quickly, something Esper acknowledged. “We have to flesh that out on our end and we’ll see what makes the most sense.”

Asked about dealing with three different US secretaries of defense in less than six months, NATO chief Jens Stoltenberg told reporters today, “they are three different persons, but for me, what really matters is that they are conveying the same strong message.” Esper, a former Army officer who had once been stationed in Europe, “has actually served in Europe, as a US soldier,” Stoltenberg continued, “and that just highlights that he really understands the trans-Atlantic bond and the importance of the US military presence in Europe.”