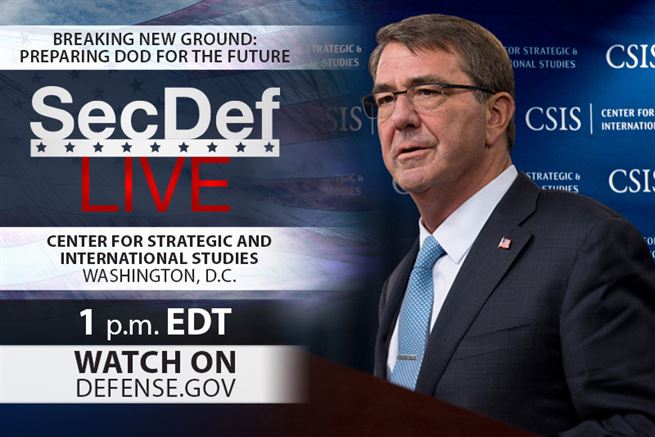 WASHINGTON: After more than 15 years of discussion, sharpened recently by the grim realities of complex wars and terror threats, the Pentagon and Congress are poised to remake the laws and policies that govern the U.S. military, known as Title X and Goldwater-Nichols.

Donald Rumsfeld and Congress were poised to start that process when a group of terrorists attacked the United States on September 11, 2001. Then came the Afghan, Iraq and other smaller wars. Now, 30 years after the passage of the Goldwater-Nichols Act, Defense Secretary Ash Carter has delivered a major address today in which he unveiled the first moves to revamp how the US military fights and who has authority to do what. 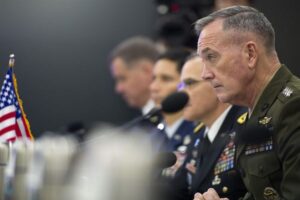 First, recognizing that “we need to clarify the role and authority of the Chairman, and in some cases the Joint Chiefs and the Joint Staff,” Carter is proposing three major changes to the role of Gen. Joseph Dunford, chairman of the Joint Chiefs of Staff, and his successors:

Carter, recognizing a strong push by many military reformers and strategists “to put the Chairman into the chain of command,” says he and Dunford “agree that would erode the Chairman’s objectivity as the principal military advisor to the President and the Secretary of Defense.”

Carter also says that Cyber Command, presently lumbering along beneath and alongside both Strategic Command and the National Security Agency, may be granted the authorities of a Combatant Command. His language was very careful in the speech. He says only “we should consider changes to cyber’s role in DoD’s Unified Command Plan.”

Senators John McCain and Jack Reed, the top Senate defense policymakers, said during a hearing today with Adm. Michael Rogers, the man who combines the roles of director of the National Security Agency and head of Cyber Command, that they think CyberCom’s authorities may need changing and they may insert language to that effect into the 2017 National Defense Authorization Act. Clearly, we have DoD and lawmakers playing the careful dance of not stepping on each other’s toes while gliding to finally elevating Cyber Command to an independent command with authorities similar to those of Strategic Command or one of the regional combatant commands.

How carefully are they all moving? Here’s what McCain said this morning: “We are looking carefully at the consolidation of commands here as far as your (Cyber Command) responsibilities are concerned. I believe that the Secretary of Defense will also support such moves. So I’ll be recommending to the committee that we include that consolidation in the defense authorization bill.”

Dustin Walker, the committee’s spokesman, said this when I pressed for more clarity: “As Senator McCain has stated, the Senate Armed Services Committee is looking carefully at optimizing the structure of the military combatant commands, and will continue to consider a variety of policy options to achieve that goal in the defense authorization process.”

Jumping on the push led by Sen. McCain to grant the service chiefs much greater responsibility for buying the best weapons and doing it on time and on budget, Carter notes that, “with this greater responsibility comes greater accountability – the chiefs themselves, and their military staffs, will need to sharpen this skillset, which in places has atrophied over the years, to be successful in discharging their new acquisition responsibilities.’ The secretary also expects the service chiefs to apply the lesson of war they’ve learned — “where speed and agility are crucial.”

Carter’s also going to try to streamline the acquisition system. He’s ordered a review of the size and actions of the Defense Acquisition Board, which has 35 principals and advisors. In his speech, Carter says, “reducing these layers will both free up staff time and focus decision-making energy on overcoming real obstacles to program success rather than bureaucratic hurdles. And we also intend to reduce burdensome acquisition documentation – for example, in cases where the defense acquisition executive serves as the milestone decision authority, the current process dictates that 14 separate documents be coordinated within the department.”

When will all these changes start happening? “Over the coming weeks, we will execute some of these decisions under our own existing authority,” Carter says.

The big recommendations on all this were crafted by Deputy Chief Management Officer, Peter Levine, and Lt. Gen. Thomas Waldhauser of the Joint Staff, who were charged by Carter with leading “a comprehensive, department-wide review of these kinds of organizational issues – spanning the Office of the Secretary of Defense, the Joint Staff, the combatant commands, and the military departments – to identify any potential redundancies, inefficiencies, or other areas of possible improvement.”