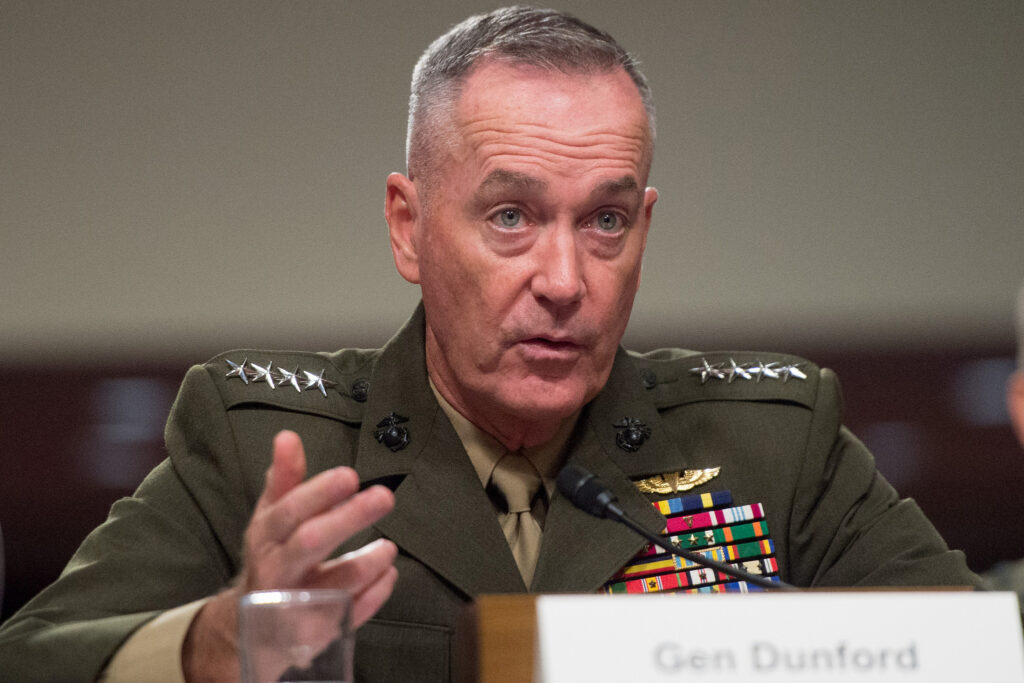 Breaking Defense contributor James Kitfield spoke with Gen. Joe Dunford, chairman of the Joint Chiefs of Staff, during Dunford’s swing through Japan, Singapore, Australia, Wake Island, and Hawaii. BD readers know that Defense Secretary Jim Mattis promised Sen. John McCain yesterday that America would get a new Afghan strategy by mid-July. In this second part of Kitfield’s interview, Dunford talks Turkey, Kurds, Daesh (ISIS) and whether the US will boost the number of troops stationed in Afghanistan. Read on! The Editor.

BD: Just while you were meeting with your Asian counterparts in Singapore and Sydney, Australia, there were terrorist attacks claimed by the Islamic State of Iraq and Syria (ISIS) in London, Melbourne, and Kabul. What are we and our allies doing to try and contain the threat from ISIS’ foreign fighters returning to their home regions and launching attacks?

Dunford: One of the issues we talked about with our allies is that there are three pieces of connective tissue that unites these terrorist groups: the flow of foreign fighters, the flow of resources, and a common ideology. And we need to cut that connective tissue. A primary way we are doing that is through a broad intelligence and information sharing network that we have established with the members of the anti-ISIS coalition, who all share a common view of this threat of ISIS foreign fighters.

A critical part of that effort is Operation Gallant Phoenix, an intelligence sharing arrangement that started out with eight or so countries, and has since expanded to 19 nations who have committed to sharing this intelligence. We’re in the process of trying to expand that initiative to even more countries. Gallant Phoenix allows allied nations not only to share intelligence on the foreign fighter threat, but also to get that information back to their law enforcement and homeland security agencies so they have visibility on the movement of foreign fighters in order to deal with this challenge.

BD: Is the United States’ “annihilation” battle plan in Iraq and Syria that you’ve spoken of also designed to contain the foreign fighter threat?

Dunford: Yes. When Secretary Mattis looked at our anti-ISIS campaign, he concluded that in some instances we were essentially just pushing the enemy from one location to another. He asked me and the military chain-of-command to make a conscious effort not to allow ISIS fighters to just flee from one location to another, but rather to deliberately seek to ‘annihilate’ the enemy. That was the commander’s intent, and our commanders on the ground have tried to meet that goal of annihilating the enemy in order to mitigate the risk of these terrorists showing up someplace else.

BD: Has that worked in the battles to retake Mosul and Raqqa, the twin capitals of ISIS self-proclaimed caliphate in Iraq and Syria?

Dunford: We’re certainly emphasizing it to a greater degree, and having some success. But I would never claim that means that all enemy fighters are being killed. One tactic they have adopted is to mix in with the civilian population, and that makes targeting them very difficult. We can’t just indiscriminately bomb people who are leaving these cities. Even with this annihilation battle plan, we have to be very careful about civilian casualties.

BD: How do you see ISF and coalition operations unfolding after Mosul is recaptured?

Dunford: Well, we will obviously take our cue from [Iraqi Prime Minister Haider] Abadi, who will decide on the sequence of operations after Mosul is recaptured. But there are some major areas where ISIS is still present that are under consideration. Iraqi Security Forces will still need to clear ISIS out of territory west of Mosul to the Syrian border, for instance, and there are also pockets of ISIS fighters southeast in Kirkuk Province and in the middle Euphrates River Valley. Of course it’s going to take the Iraqis some time to regenerate their forces after the battle for Mosul, so our plan is to continue keeping pressure on those ISIS forces until the main ISF forces are ready again.

BD: How have you handled Turkey’s objections to the U.S. decision to arm the SDF, which include Kurdish forces that Ankara views as terrorists?

Dunford: I will tell you that the coalition is also enthusiastic about the growth of the SDF. [U.S. special envoy Brett] McGurk has led the effort to empower an Arab component of the SDF that will provide security and governance in Raqqa after the operation to recapture the city is finished, which answers some of Turkey’s concerns.

We’ve made other assurances to Turkey, including making sure the arming and equipping of the SDF is done in a way that is narrowly focused on its ability to recapture Raqqa. We’re also helped the Turkish military rebuild after the challenges they’ve faced in recent months, and we’re sharing intelligence with Ankara about the [Iraqi Kurdish terrorist group] PKK. Secretary Tillerson is also working very closely with his Turkish counterpart to make sure that the Geneva Process is front and center in our negotiations about Syria’s future, which also addresses Turkish issues. So we have done everything we could to address Turkish concerns, and I personally have made on the order of nine visits to Turkey to speak with my counterpart there. I think the Turks appreciate that.

BD: What is the status of the Astana Plan that Turkey signed last month with Russia and Iran, which calls for the creation of four “de-escalation zones” in Syria?

Dunford: Well, the United States was an observer at those talks, but we decided not to formally participate in a process which includes Iran as a guarantor. Secretary Tillerson has said publicly that we welcome any agreement that results in a cessation of hostilities, but we believe the Geneva Process – and not Astana – is the right vehicle for reaching a political solution in Syria. And while there was some indication of reduced violence in some areas after the Astana Plan was signed, we also saw the Syrian regime conduct major offensive operations in one of the “de-escalation zones” just in recent days. So it’s fair to say that negotiations for a ceasefire remain a work in progress.

BD: Speaking of Iran, have you seen any letup in its destabilizing activities in the region?

Dunford: No, I haven’t seen any change in Iran’s behavior. The Republican Guard’s Quds Force continues to exert a malign influence in Iraq and Syria through proxy forces and militias, and in Lebanon through Lebanese Hezbollah. Iran’s support for [Shiite rebels] in Yemen has also been unhelpful, and Tehran continues to pose a threat to close allies like Israel and Jordan. So mitigating the malign influence of Iran remains a major U.S. objective in the region.

In talking about Iran it’s also important to zero in on one of the most important issues for the United States, and that’s freedom of navigation in the Straits of Hormuz and the Bab-el-Mandeb. By harassing U.S. and international maritime activities in the Persian Gulf and supplying advanced anti-ship cruise missiles to Houthi rebels in Yemen on the Red Sea coast, Iran is posing a threat to two waterways that are absolutely crucial to global commerce. Since the 1970s and [President Jimmy Carter’s ‘Carter Doctrine’], the United States has been committed to keeping those vital waterways open. 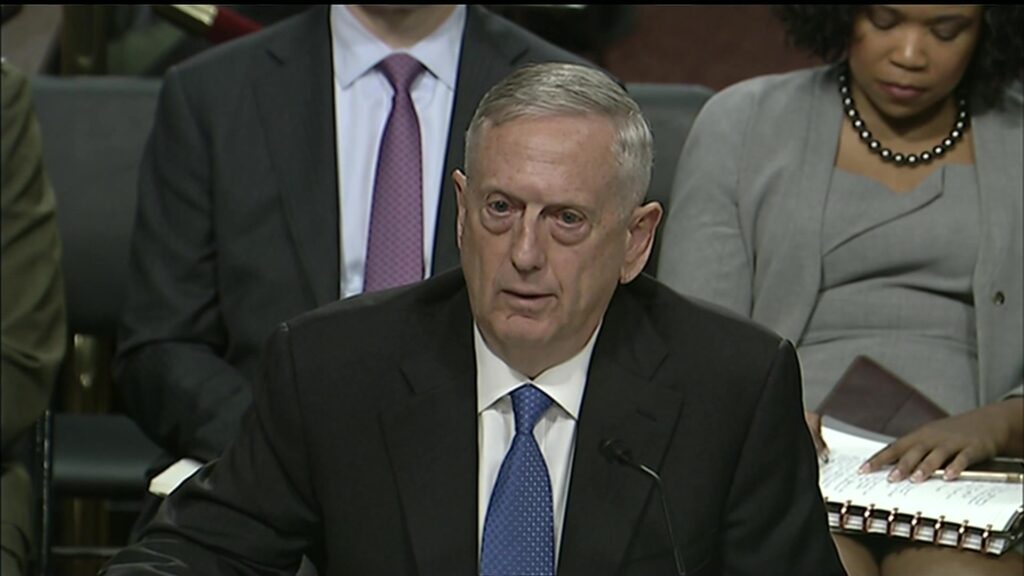 BD: Will you recommend a troop increase for Afghanistan to President Trump, and why is Afghanistan still important after U.S. forces have spent more than 15 years fighting there?

Dunford: Because there are still roughly 17 extremist groups operating in and around Afghanistan. From personal experience, and from reading the intelligence and talking to my commanders on the ground, I have absolutely no doubt that, if given the space to reconstitute and grow stronger, those organizations will follow through on their intent to attack the United States and the West. They are already doing it inside Afghanistan. So we continue to need an effective counterterrorism platform and posture in that region, and the Afghan government has proven to be a good counterterrorism partner. The United States, our NATO allies and coalition partners, and the Afghans themselves are fighting together against a common enemy.

As for troop numbers, we’re analyzing what is necessary to enable the Afghan Security Forces to take the fight to the enemy. One of my greatest concerns is the number of casualties that they experienced in 2015 and 2016. They need additional medical personnel and medevac capability. They also need additional airpower, because that is the greatest asymmetric advantage they have over the Taliban. We need to help the Afghan Security Forces be able to deliver aviation at the right time and place. They also need more trainers and educators and help with maintenance. So those are the areas we are looking at to possibly prop up our support, based on the lessons of 2015 and 2016.

BD: It sounds like you are going to support General Nicholson’s request for more forces (in Afghanistan)?

Dunford: I haven’t taken a public position yet because I haven’t had a chance to talk with the president on the issue. So I’ll make my recommendation to him first. But it’s fair to say that based on what we’ve learned in the past two years, I believe we need to make some adjustments to our force posture.