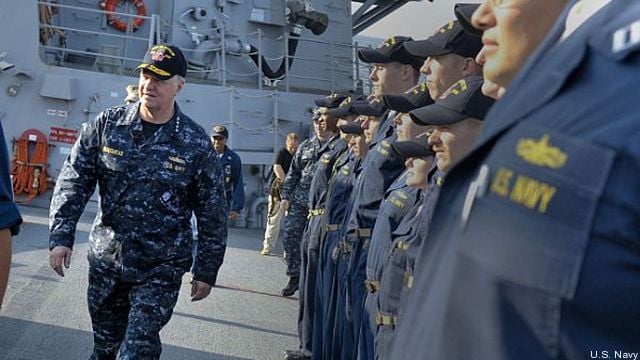 Washington: Chief of Naval Operations Adm. Gary Roughead is betting that unmanned underwater systems will be the future for the Navy, and he is already taking steps to ensure that future becomes reality.

As questions circulate over the feasibility of the Navy’s shipbuilding plans and the viability of its current surface fleet, unmanned underwater vehicles will be invaluable in its future force strategy, Roughead said in a speech today.

To get there, Roughead nominated Rear Adm. Matthew Klunder, current director of the Navy’s intelligence, surveillance and reconnaissance shop in the service’s information dominance division, to head up the Office of Naval Research.

Klunder, a staunch supporter of unmanned systems, will now be in charge of the office that will likely produce the next-generation of underwater drones for the Navy.

Roughead has also established a cell within the Navy’s Judge Advocate General’s office to examine current rules of engagement and how they tie into the legal and ethical issues tied to unmanned systems.

The submarine-like drones will be key in supporting the Navy’s global strategic presence mission, from intelligence gathering to extending lines of communication for Naval forces, particularly as service operations begin to move into the Arctic region, the CNO said.

Unmanned underwater drones will be perfect for overcoming the operational challenges posed by the harsh, unforgiving Arctic environment, Roughead said.

While the CNO said the Navy is doing its part to get ready for the flood of unmanned systems into the fleet, he noted DoD and industry would also have to do their share too — especially in the acquisition realm.

The Pentagon has “buraucratized” the procurement process to the point where the service cannot get what it needs, when it needs it, in the field of unmanned systems.

In particular, the operational test and evaluation process has become so encumbered by DoD red tape, that in demand UAS do not make it into the water soon enough, Roughead said.

But the blame does not fall squarely on the department’s shoulders alone, the CNO added. Roughead urged defense firms working UAS to increase collaboration with each other, in order to get systems, like underwater drones, into the field faster.

That collaboration, he added, will become even more important as the Navy and rest of DoD figure out how to do more will less, due to the pending budget cuts to national security.