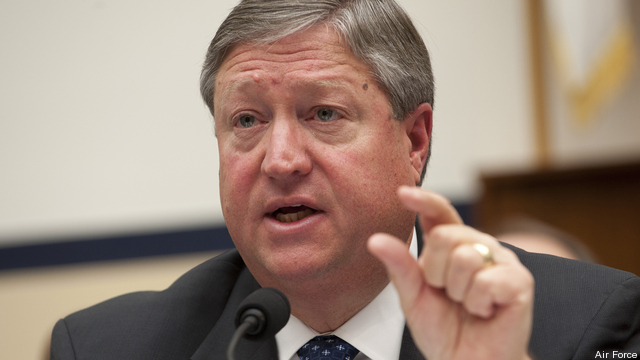 CAPITOL HILL: Air Force Secretary Michael Donley warned Congress today that if it blocks cuts to the Air National Guard this year, it will just be “doubling down” on cuts required in 2014 — maybe not to the Guard, but somewhere in the Air Force — even if sequestration is averted.

If sequestration does take effect, as is current law, Donley added, it will crunch Air Force budgets by 10 percent across the board or, if personnel are exempted, as is likely, by 13 percent in procurement, R&D, and readiness.

While Donley expressed the service’s willingness to work with Congress and the governors on the controversial cuts, and he pledged to improve cooperation in the future, he spent far more of his time at the Capitol Hill Club this morning defending the Air Force’s approach.

“They’re difficult for Congress to deal with because they feel so local,” Donley said of the proposed cuts to the National Guard. But “cuts in active duty forces cut also lead to unacceptable stress” as a smaller pool of units has to meet the same number of missions worldwide, Donley said. Politically, he added, “active-duty cuts would be no less contentious in the communities where they occur.” (Probably true, but there is a unique political lobby protecting the Guard that does not exist for the active force).

“Congress is still coming to grips with the specifics of the challenges we face,” Donley went on. While legislators approved $487 billion in defense cuts over a decade in last year’s Budget Control Act, he noted, it was only when the president’s fiscal 2013 budget plan came out in February that they had to face the details of what that would mean, program by program, state by state, district by district. But fiscal ’13 is just the down payment on ten years of cuts, he said, and whatever Congress punts on this year will just make the next year uglier.

“The fiscal challenges facing our federal government are significant enough that the budget control act had to go out ten years to address these issues,” Donley went on. “In my memory never out to ten years did we have to make these kinds of commitments and forecasts in order to get the nation’s fiscal house in order,” he said, drawing on his own experience in the Pentagon, the White House, and the Senate staff. “We’re still on the front end of a lot of work ahead.”

As for the Senate proposal to defer all cuts to a national commission on Air Force force structure, Donley simply referred to outgoing Air Force Chief of Staff Gen. Norton Schwartz’s comments in his last press conference, yesterday afternoon, that a commission “probably would not be up to the task, given the timeline required.”

“There’s no mechanism that can produce a balanced program for our Air Force better than we in the Department of Defense can, much less provide that sort of advice in a matter of months,” Schwartz said yesterday. “So as a practical matter, while the commission conceptually has some attraction, I think it is unlikely to be able to produce the result that the committee hopes for it to provide.”

Like other Air Force officials, Donley pledged that the Air Force would collaborate better with Congress, governors, and Guard commanders around the country, who have a “legitimate interest” in making sure the Guard can respond to local needs for disasters and other “civil support” missions. “But that has to be balanced with the integrity of internal discussions” within the Pentagon, he emphasized.

That message — “trust us, we know what we’re doing, we just need to explain it to you better” — is not likely to resonate on Capitol Hill. Far more palatable is the deferential approach taken by the administration’s nominee for Air Force Chief of Staff, Gen. Mark Welsh, in his Senate confirmation hearing last week. Welsh did not have to answer any questions about a commission, though, so the difference may be more one of tone than substance, with Welsh getting to play good cop with Congress while Donley talks tough.