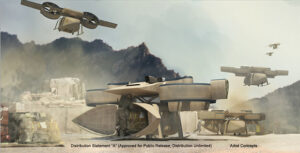 A bevy of new vertical take off and landing (VTOL) aircraft conceived to take the military beyond the speed, range and altitude limits of helicopters are scheduled to fly over the next two years. None looks more like science fiction becoming science fact than a sort of flying candy crane formerly known as “Transformer.”

What is now called the Aerial Reconfigurable Embedded System (ARES) is being built by prime contractor Lockheed Martin’s famed Skunk Works with Piasecki Aircraft of Essington, Penn., under a $77 million DARPA contract. Lockheed is providing the software, Piasecki the hardware.

The hardware is a 41-foot span, unmanned flying wing in a tiltrotor configuration. Two ducted proprotors about eight feet in diameter, embedded near a stubby fuselage, will swivel up to let ARES take off and land like a helicopter and tilt forward to let it fly like an airplane.

The fuselage will be able to carry various plug-and-play payload modules – cargo, sensors, life support gear, even remote-control ground attack weapons are among the ideas — and deliver them to troops on austere battlefields or let those troops employ them.

To lift its “useful load” — payload module plus fuel — of up to 3,000 lbs., the 7,000-lb. maximum takeoff weight ARES demonstrator will be powered by two non-tilting Honeywell Aerospace HTS900 helicopter engines in the fuselage, each generating 989 horsepower. Ashish Bagai, DARPA program manager, expects the aircraft to cruise as fast as 170 knots (195 mph), with a ceiling of 20,000 feet, and have a mission radius of about 175 miles out and back. But that’s just the demonstrator. The contractors are working toward a variant able to cruise at 250 knots with a mission radius similar to the V-22 Osprey.

First flight was expected last June, but Bagai said that was delayed because “some developmental items have required some additional testing.” The drive train, which borrows gears from the Sikorsky CH-53E helicopter but whose proprotors, their ducts and other parts “are all unique and brand new,” Bagai said, are among them. “Nothing else of this sort exists.”

ARES is now scheduled to fly next fall at earliest, a few weeks after the September 2017 flight of Bell Helicopter’s new V-280 Valor tiltrotor and Sikorsky-Boeing’s SB>1 Defiant compound helicopter, both being built for the Army-led Joint Multi-Role Technology Demonstrator program.

John Piasecki, president and CEO of the company that bears his name, said the idea is to vastly increase the mobility and range of small military units by giving them an aircraft that can perform numerous missions. “Both the Marine Corps and the Army are looking to expand their expeditionary capabilities and be able to support what they call distributed operations over much broader areas,” Piasecki said. “Doing that, they need to have the flexibility to aggregate and disaggregate at will in order to apply combat power.”

Key to that flexibility, Piasecki said, is the ability to order up necessary supplies. “You could take a big Chinook or a -53 and very efficiently drop 10,000 lbs. of stuff on a small unit, but then they’re no longer mobile,” Piasecki said. “They’re going to stand around and guard their food. So it’s a transition from a traditional logistics push mentality to an on-demand logistics pull mentality.”

The latter, he said, is like the ability to order online with a smart phone or other wireless device and have goods delivered to your door. “The Army and the Marine Corps are going to need that kind of capability,” he said.

There’s evidence service leaders agree. DARPA’s job is to develop and demonstrate technologies the military may want, but for a variety of reasons, things the agency comes up with often fail to make the transition into use by the services.  In this case, Bagai said, both the Marine Corps and the Army’s Combined Arms Support Command (CASCOM) are watching closely.

“If we are able to successful execute the program, get the airplane in the air and demonstrate its utility, the forces would like to evaluate it immediately upon the time that it starts its flight test program,” Bagai said.