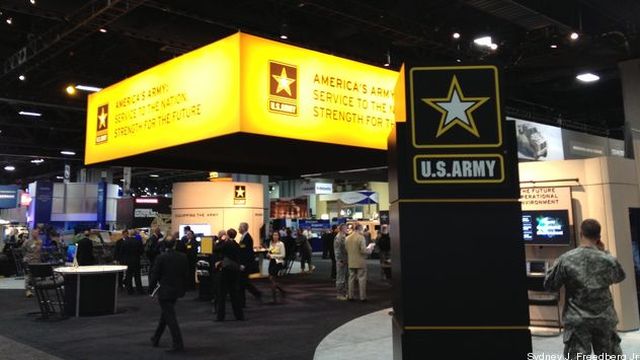 WASHINGTON: In a telling sign of the uncertain economic and spending climate in the defense world – faced with sequestration and the possibility of a year-long Continuing Resolution — at least three defense conferences have been cancelled in the last two months and defense companies continue to pare their participation in even the biggest shows, the air show in Paris and Farnborough.

Cancelation of the Military Health System Conference, set for Feb. 11-14, was announced in a memo signed by Jonathan Woodson, assistant secretary of defense for health affairs, and the three service surgeon generals. In past years, the conference has attracted 3,000 attendees and exhibitors.

“Due to withdrawal of support by the Department of Defense and the Department of the Army, it has made it impossible for NDIA to conduct the 2013 Tactical Wheeled Vehicles conference in Monterey, California. “

The much smaller U.S. Air Trade and Technology show in Dayton, Ohio with Wright-Patterson Air Force Base, has been canceled because it could not attract enough industry attendance. “Right now, quite frankly, it’s very difficult” to attract industry exhibitors because of the shrinking defense market and the tougher company reviews, Kent D. Owsley, show chairman, told the Dayton Daily News,

The future of association military trade shows and even military conferences that require travel — even to suburban Washington — has become cloudy at best.

Things began to look particularly difficult for defense conferences and trade shows after Deputy Defense Secretary Ash Carter issued a Jan. 10 memo on the need for fiscal restraint in the Pentagon. That has been followed by memos from each service offering strict guidance on expenses.

The Association of the US Army’s major winter conference in Fort Lauderdale, scheduled for Feb. 20-22, only received the official seal of approval for Army attendance from Army Secretary John McHugh on Feb. 1.

The Air Force Association is committed to its Air Warfare Symposium in Orlando later this month. Chet Curtis, director of policy and communications at the Air Force Association, notes that AFA has had experience in having to cancel its largest show in September 2001 in the wake of the terrorist attacks on the United States. The Association of the United States Army suspended its huge annual conference that year but held a much smaller one-day event a few months later.

Like other large defense contractors, Lockheed Martin cut the number of people it sent as well as the scale of its exhibits at these shows in the last two years.

Michael Friedman, a Lockheed Martin spokesman, acknowledged in an e-mail that these shows are “an important part of our business,” but “we continue to look for ways to drive affordability into our business and align our actions with customer priorities.” The long-term cycles of spending cuts, drawdowns and industry consolidations are nothing new to the industry, but the associations who dominate the conference business are keeping a watchful eye on what Congress and the Pentagon are doing and industry is planning.

Curtis saw as a good sign the Air Force’s early sanctioning of the event and the commitment of its senior officers and civilian to speak at the symposium. “We’re also seeing very strong industry participation” now. But, “If you call next week, the answer may be different.”

One way to keep military and Defense Department civilian attendance up is to make the event free to them, raising the potential audience touring the industry displays. AFA is not alone in this. The Navy League’s Sea-Air-Space exposition in April at National Harbor in suburban Washington has a similar policy. AUSA’s main annual conference (which it calls its annual meeting) is also free to attendees.

For Raytheon the changes in its attendance at defense trade shows came six years ago after a long-term review of their value, David Desilets, a company spokesman, wrote in an e-mail. It’s a process that continues. “We’ve reduced the overall number of events we attend.” Money is now spent only on, “select events that offer us the best opportunities to engage with our customers.” However, Raytheon has actually beefed up its presence at the two big air shows as it pursues a greater share of international business.

AFCEA is optimistic about its upcoming event with the Naval Institute in San Diego. “We’re still seeing large government presence,” said Tobey Jackson, AFCEA’s senior director of marketing and public relations. For the defense industry that means more senior officers and officials such as the Navy’s chief information officer on the show floor interacting with industry.

Peter Daly, chief executive officer of the Naval Institute believes “there’s a special synergy” that exists in the trade shows that also offer professional development programming. “That’s the ‘secret sauce'” in keeping them successful, with service members learning what industry has to offer and industry learning what they need. With “hundreds of billions of dollars at stake [in contracts], there’s even more importance to having people talking together” after sessions and in the exhibit areas.

Since the start of the year, Gordon R. Sullivan, AUSA president [John’s former boss, when he was spokesman for AUSA], has been telling audiences at association lectures and industry events that its winter meeting in Fort Lauderdale, Fla., was still on but would be smaller than in past years.

David Liddle, AUSA’s spokesman, said that as of Jan. 24 there were 100 exhibitors. In the past, there have been more than 150 occupying the Fort Lauderdale convention center, spilling out into large tents or temporary structures in parking areas to accommodate military and contractors’ exhibits.

Liddle said the number of Army attendees who will be covered by TDY funds is still uncertain. But one thing is perfectly clear. “The heavy hitters [senior uniformed and civilian leaders] will be there speaking [and touring the exhibits]. We enjoy tremendous support from the Army and the Army will do what makes sense, and cents with a C.”

One of the ways to improve prospects for defense conferences may be for producers to make shows more “local” – holding them in Washington, Tidewater, San Diego and Hawaii, close to large numbers of soldiers, sailors, airmen and their civilian counterparts.

The Navy League, AFCEA and the Naval Institute all are using this approach. “Most of the Navy systems commands are near here,” John Daniels, director of communications at the Navy League in Arlington, said. Its largest event is Sea-Air-Space at National Harbor in suburban Washington. That means there are no travel expenses for government attendees.

Last year, Sea-Air-Space had 11,500 registrants as attendees or exhibitors. Daniels said 1,020 were military and 2,419 were Defense Department civilians, precisely the audience the 175 exhibitors want.

“We’re moving forward as planned” with support from Huntington-Ingalls the Navy’s largest shipbuilder as a major exhibitor again. “We want to help bring [industry, the sea services, Congress and the public] to the table” since that is “part of our core mission.” Unlike most other defense associations, the Navy League does not have active-duty members, so attracting that audience to Sea-Air-Space is vital to its success.

Daly of the Naval Institute said that by partnering with AFCEA and taking the events to Virginia Beach and San Diego, with their large concentrations of sailors and Marines, the associations are putting on “local events” easily attended by mid-level officers, noncommissioned officers and civilians. “It’s the first level of common sense” for organizations like his to host events where there is an audience and bring the senior officers of the Navy and Marine Corps to them. “I am very bullish” for the future even if the restrictions on travel continue into the next fiscal year.

“The landscape has changed,” AUSA’s Liddle said. While AUSA is evaluating whether it will continue holding its winter meeting in Florida or to move it closer to Army installations, it is moving ahead with a new conference dealing with the Pacific in Hawaii this April. There are about 18,000 soldiers stationed on the islands. For AUSA, Hawaii is looking like a “local” event for it that reflects the change in defense strategy emphasizing the Pacific.

John Grady was the longtime communications director for the Association of the US Army. He is retired, but writes for ScoutComms, a public relations company, and other outlets.