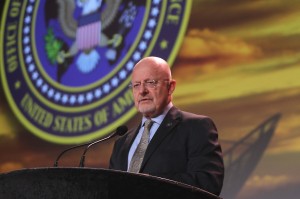 GEOINT: Director of National Intelligence James Clapper identified China today as “the leading suspect” in the two sweeping hacks of the Office of Personnel Management, one day after NSA Director Adm. Mike Rogers dodged the issue.

In Clapper’s first answer to a question about who is responsible for the OPM hacks, he laid the blame squarely on China. “On the one hand — please don’t take this the wrong way — you’ve got to salute the Chinese for what they did,” Clapper said. Then, when he was pressed for a direct answer — were the Chinese responsible for the OPM hacks — he sort of backed off, saying they are, “the leading suspect.”

In a very interesting aside that may speak volumes about both American capabilities and the policy constraints under which we operate, Clapper added that, “if we had the opportunity to do that, I don’t think we’d hesitate for a moment.”

In what sounded like a plea to the White House for a policy decision to retaliate against those who launch such attacks, the nation’s top intelligence officer said such attacks would continue “until such time as there is some sort of penalty for what we would find reprehensible and onerous.” He then repeated that message in a slightly different way saying that until the US develops a “substance and psychology of deterrrence this is going to go on.”

But the United States has shied away away from taking that path, he made clear. “That has been a struggle for us because of concerns about unintended consequences.”

Clapper, however, offered an intriguing insight into the relative threats posed by China and Russia — the leading cyber threats to the US and our allies. Russians, he said, “are a lot more subtle about this” than are China’s, and Russian capabilities pose “a tremendous threat” to the US. He didn’t offer any details, but if you combine his comments with those broader ones by Air Force Secretary Deborah Lee James at the Paris Air Show, you’ve got a picture of a singular and capable threat.