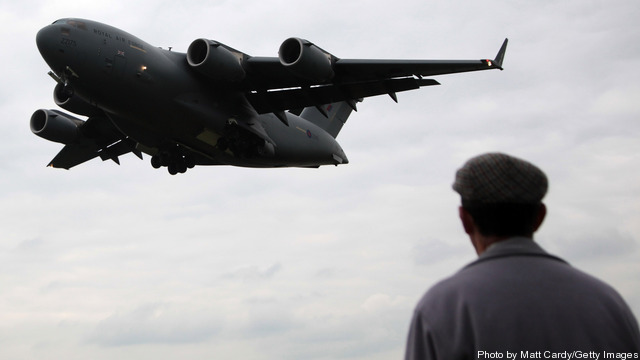 So how many aircraft does it take to move the world’s largest military force? Not as many as many as you would think, the Pentagon says.

In what has at times seemed like a long-running bad joke, filled with terms like ‘floors’, ‘ceilings’ and ‘sweet spots’, the Pentagon has finally capped its strategic airlift requirement at 300 aircraft.

That mix of C-17 Globemasters and modified C-5 Galaxy aircraft will be enough to move America’s fighting men and women to spots all over the world, Christine Fox, director of DoD’s Cost Assessment and Program Evaluation office, told the Senate Armed Services Seapower subcommittee.

DoD’s plan calls for just over 200 C-17s and roughly 50 C-5s to support combat and peacetime operations. It also requires retirements of over 30 C-5s from the fleet.

That 300-plane number seemingly puts to rest the years of bickering between the department, the Air Force and the Hill on strategic airlift. It is also a number that, for the first time, Congress cannot refuse.

“I do not think there is the political climate to support any more” strategic airlifters or push back against the C-5 retirements, according to a Hill aide.

But it has not always been that way.

During the most contentious years of the airlift requirement debate, then newly-installed Air Force Chief of Staff Gen. Norton Schwartz drafted a letter to Congress, saying that a 316-plane fleet was the “sweet spot” for the service for strategic airlift. Previous assessments placed that number as high as 320 or more.

In those days, current U.S. Transportation Command chief Gen. Duncan McNabb was “the person that would tell you, behind closed doors, we would love to have more C-17s,” the aide said.

Simply put, the Air Force would ask and the Hill would deliver, according to the aide.

But with a stagnant economy, shrinking defense dollars and a toughening fiscal mindset in Congress, the days of airlift wishlists being granted are over, the aide said.

When asked if the Air Force had been roaming the halls of Congress, drumming up support for more airlift, no matter what the Defense Department says, the aide replied “there hasn’t been any of that lately.”

But the silence coming from the Air Force’s congressional liaison office does not mean airlift supporters are going away quietly, another Hill staffer said.

Included in the SASC draft of the fiscal year 2012 defense spending bill, members voted against changes to current law that required the Air Force to maintain a strategic airlift fleet above 300 airplanes.

Even though the measure does not ban C-5 retirements outright, the measure is a huge stumbling block to shrinking the airlift fleet, the staffer said. With similar language in the House committee bill, the Air Force can theoretically keep pushing for 316 planes “barring a conference surprise,” according to the staffer.

But getting the green light from defense authorizers does not mean that the Air Force is free and clear, the Hill aide noted. Even if the final defense bill says 316 is the number, the Air Force is “basically looking at a bill they are going to have to pay” from other areas in the service budget, the source said.

“There is really no sympathy for them [now],” the source added.