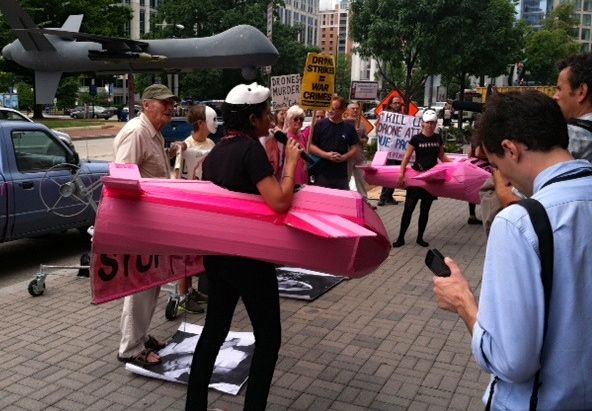 Our photo, by colleague Mike McCarthy, was shot yesterday in front of the Washington Convention Center, where the AUVSI conference is being held.

AUVSI: When you read or hear the word “drone,” is your first thought, “killer robot?” The leaders of the drone industry fear it is, which is why they’re hoping to persuade the news media to stop using a nice, clear, five-letter English word and instead clutter their reports with eye-glazing acronyms such as UAS, UAV, RPA or some such. (Yes, that was an editorial comment.)

How seriously do drone makers take this issue? Journalists logging onto the Wifi in the Media Room at the Association of Unmanned Vehicle Systems International conference in Washington this week had to use this password: “DONTSAYDRONES.”

AUVSI, the Air Force, the Navy, the Army and many defense industry leaders just hate the word “drones.” The Media Room Wifi login password, clearly, was a clever — but feeble — attempt to condition the media to drop a word whose primary definition used to be “lazy male bee” but today is a popular synonym for unmanned aircraft. The trade group and many of its members prefer the terms “unmanned aerial systems” (UAS) or “unmanned aerial vehicles” (UAV) or “remotely piloted aircraft” (RPA) or, as they’re officially known in Europe, “remotely piloted aircraft systems” (RPAS)

“The average person on the street, and even intelligent and informed people, when they think of the word ‘drone,’ they think of the military, they think hostile, they think weaponized, they think large and they think autonomous,” argues AUVSI’s president, Michael Toscano, especially after several years of Code Pink protests against drone strikes. That connotation is not only inaccurate but damaging, he told me, to a nascent industry whose products range in size from aircraft as big as an airliner to aerial vehicles that can fit in the palm of your hand, and whose potential peaceful uses far outnumber their role in combat operations and CIA targeted killings.

Show a person a range of photos of unmanned aircraft, however, and “if you say the word ‘drone,’ 80 percent will pick the picture of a Predator – that’s what’s wrong,” Toscano said, referring to the General Atomics MQ-1, the first armed UAS used in combat and the CIA’s favorite weapon in the U.S. war with Al Qaeda and the terrorist group’s allies.

“Drone strike” is a phrase Toscano also wishes he never had to hear again. They’re really just “air strikes,” he argues, which can be carried out by manned or unmanned aircraft alike. “That launching of that missile is done by a human being, regardless of where that human being is sitting, whether it’s in the cockpit or (a ground control station),” he said.

Many military people, on the other hand, dislike the d-word “because they know a drone is a target,” Toscano said, “unthinking, launched across the sky to be shot out of the sky.”

Indeed, for some military UAS operators, the word “drone” connotes a “dumb” aircraft. After the 119th Wing of the Air National Guard in Fargo, N.D., switched from flying F-16 fighter jets to flying Predators in combat for the Air Force a few years ago, for example, the unit adopted a new motto: “We shoot back.”

Toscano also contends “drone” is wrong because it refers only to the aircraft, which is only part of an unmanned aerial system. “There’s the thing that flies, the thing it carries, the communications link, the ground station that is receiving the information, and the most important piece, the human being,” Toscano said. This, he argues, is why unmanned aerial system is the proper term.

Reminded that experts on the Defense Science Board and at the Defense Advanced Research Projects Agency were using the term “drones” to describe unmanned aircraft other than targets as long as twenty and thirty years ago, Toscano was quick to reply. “Doesn’t mean it’s right.” He added: “Our organization does not support that. So don’t say drones.”

Anecdotal evidence suggests Toscano and his fellow crusaders have already lost their the fight, though getting them to admit it is difficult. Consider:

Among the more than 550 exhibitors at the AUVSI conference was a new Huntington Beach, Calif., company called Allied Drones. Joshua Kornoff, the company’s founder and president, said he started the business last year after film companies he worked for as a special effects and pyrotechnics exprt – “I used to blow stuff up for the movies” – began asking him to fly small aerial systems on set for photography. He tried the kind hobbyists use but, “they didn’t meet my needs, so we just started building something that would work for me,” Kornoff said, then decided to go into the business. He used “drones” in his company’s name “to say we’re serious, it’s a real machine, it’s not a toy,” Kornoff said. “These are $30,000 machines, which is not a toy. Other people started liking that and we’re here at the show trying to transition from Hollywood and hobby grade kind of stuff into law enforcement and industrial use.”

If they can’t even stop themselves from using the term, how do they expect to stop the rest of the world?

“If we think we can put the horse back in the barn, then that’s what we should try to do,” Toscano said. But does it really make sense to beat a horse that’s clearly already dead? The Wall Street Journal’s article on the first day of the AUVSI event was headlined: “Drone Event Draws Fans, Protesters.”

Guess some people just never got the word.