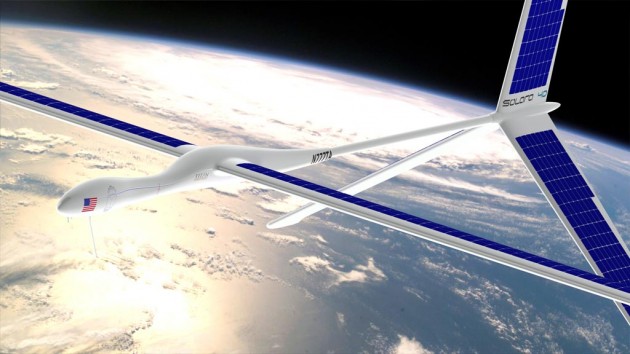 AUVSI: Imagine a featherweight aircraft built of composites boasting an enormous 160 foot wing, swathed in solar cells that can take off at 20 mph and remain aloft for five years.

Yes, five years. The plane would fly at 65,000 feet, above most air traffic aside from the odd U-2 zooming past. It would, without a doubt, be the loneliest plane in history.

The aircraft, known as the Solara, and its company Titan Aerospace, were unveiled here at the Association for Unmanned Vehicle Systems International, the world’s largest trade show for unmanned planes, vehicles and ships.

I spoke with Chief Technology Officer Max Yaney, clearly jazzed by all the attention his two-year-old firm was getting, nervously awaiting one of his first TV interviews. The plane, inspired in part by work done by Paul MacCready, builder of the various solar-powered Pathfinder aircraft, has been made possible by “a confluence of three” factors, Yaney told me: lighter, more efficient solar technology; better composites; and improvements to battery weight and power.

The largest plane they plan to build, the Solara 60, could carry up to 250 pounds of payload, anything from signals intelligence gear or electro-optical sensors to communications equipment. Thanks to the better batteries and solar panels the aircraft can generate up to 100 watts of power at night, Yaney told me, enough to power some of the largest electro-optical sensors available here at AUVSI.

The New Mexico-based company’s planes can circumnavigate the globe in three weeks, Nick Renold, chief operating officer, told me. While it can certainly operate in the polar regions, he noted that the reduced sunlight would mean reduced power available to the aircraft. CORRECTED RENOLD’S FIRST NAME 5:06 PM

Titan’s website says it has orders for three of the Solara 50s and one of the Solara 60s. The most obvious customers for this capability in the defense and intelligence world would be the CIA, NRO and NGA.

Positioning one of these aircraft near or over a theater of war could provide layered intelligence sources as well as backup signals intelligence or communications.

Yaney said the company has held preliminary discussions with some of the intelligence agencies. Much of the company’s marketing literature focuses on disaster management and other civilian applications.

As an example of how responsive the planes could be, Yaney said two such aircraft could be parked in what they like to call atmospheric satellite orbits above 65,000 feet at either end of the United States. When disaster struck, they could be repositioned to take photos, provide 4G cell coverage or help with mapping.

While these aircraft would clearly be vulnerable to enemy fire given their slow speed and lack of defense, the combination of high-altitude and long loiter time with relatively low cost (compared to satellites and warplanes) would seem to offer the intelligence and military markets one very intriguing capability.