“All warfare is based on deception,” Sun Tzu wrote 2,500 years ago. It’s a lesson the US military largely forgot after the Cold War, when we got in the habit of building huge, easily targeted bases. Now we must relearn deception as Russia, China, and other adversaries field, not only their own precision weapons, but the satellites, drones, and other sensors to find targets for them.

But what does deception mean in the 21st century? Once it required recruiting courtesans as spies and camouflaging troops with tree branches and green facepaint. Now it involves putting out fake news on Facebook and concealing missile launchers in commercial shipping containers.

“It’ll drive the Russians bananas,” said Tom Karako, missile defense director at the Center for Strategic & International Studies. CSIS made the video above to illustrate how a Patriot launcher might be removed from the standard-issue trailer and installed in a CONEX container. The Russians are already working on a similar concept for their Klub-K cruise missile.

Since the Russian Katyusha rockets of World War II, it’s been standard practice to build missile launchers onto the back of trucks. Even full-sized ICBMs can be moved around this way and hidden in tunnels to avoid detection and destruction, a favorite tactic of both China and North Korea. But when these truck-mounted missiles are on the road, they’re pretty obviously weapons. It’s like hiding a needle in a haystack: You may have to sort through a lot of chaff to find your target, but when you do find it, it stands out.

Putting missile launchers in shipping containers, by contrast, is like hiding a needle in a stack of needles: You can easily find something that looks like what you’re looking for, the problem is finding the right one among millions. The standard 20-foot-long CONEX box, invented by the US Army Transportation Corps for the Korean War, is now used around the world, with more than 20 million in service. They’re abundant in both civilian seaports and on US Forward Operating Bases, where empty ones are often converted into storage units or even housing. 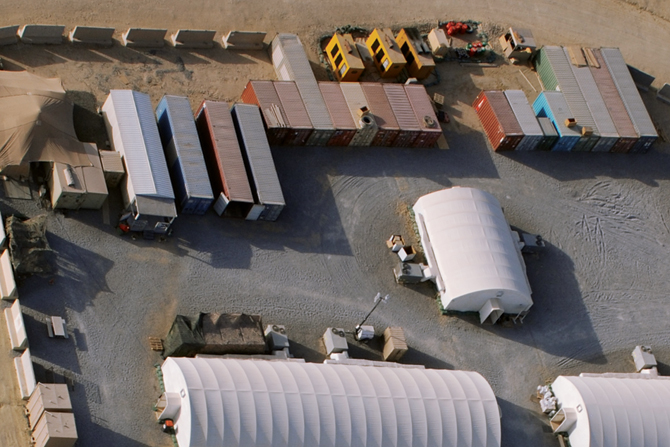 What if one were a hidden missile launcher? Could you find it?

An enemy satellite, drone, or spy could easily spot the containers and transmit their coordinates back to headquarters for an attack. But unless an agent looks inside each box, a precision-guided strike on any given cluster of CONEX boxes might hit hidden US missiles, spare air conditioners, or empty containers. That makes it much harder to wipe out the US military’s missiles in the kind of preemptive strikes favored by Chinese doctrine – and anything that makes preemptive strikes less attractive helps to keep the peace.