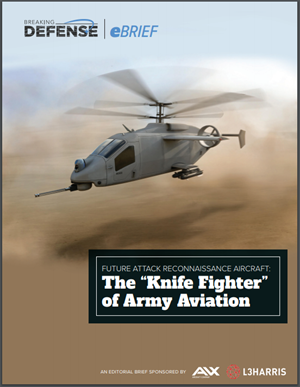 As ambitions go, the Army’s plan for its Future Vertical Lift program goes big. A critical piece of that is the Future Attack Reconnaissance Aircraft (FARA), intended to replace the retired OH-58D Kiowa which dated back to Vietnam. For FARA, the Army desires a next-generation armed scout helicopter with increased speed, range, survivability and even autonomy – not just a conventional helicopter. The Army expects to meet these aspirations through the use of technologies like advanced materials, fly-by-wire controls, pusher propellers, double coaxial rotors, and more fuel-efficient and powerful engines developed under the Improved Turbine Engine Program.

This Breaking Defense E-Brief examines the Army’s groundbreaking Future Attack Reconnaissance Aircraft program, providing a look at the field of competitors and the different technology and capability they bring.

Download this free E-Brief for information on the next generation of Army aviation.

Breaking Defense thanks the AVX Aircraft Company/L3Harris team for supporting this editorial E-Brief.
Sponsorship does not influence the editorial content of the E-Brief.