WASHINGTON: Presumptive Defense Secretary Mark Esper says flatly the F-35 “is not expected” to meet the 80 percent readiness goal set for it this year because of problems with a cockpit part that improves stealth performance.

“Transparency (canopy) supply shortages continue to be the main obstacle to achieving this. We are seeking additional sources to fix unserviceable canopies,” Esper said in response to written questions from the Senate Armed Services Committe (SASC).

The Government Accountability Office (GAO) mentioned the canopy issue in a recent report, calling it a “special coating on the F-35 canopy that enables the aircraft to maintain its stealth.” That, the congressional watchdog said. “failed more frequently than expected” so F-35 prime contractor Lockheed Martin went looking for more manufactures to produce enough canopies to meet demands. GAO also said the F-35 program was considering a new design.

This is all apiece with the general problem the F-35 program has had with obtaining new and spare parts.

“A key contributor to spare parts shortages is the F-35 program’s limited capacity to repair broken parts,” the GAO says in its April report. “The average time to repair an F-35 part was more than 6 months, or about 188 days for repairs completed between September and November 2018—more than twice that of the program’s objective of 60-90 days.”

UPDATE BEGINS “We are working closely with our F-35 transparency provider to build production and repair capacity and we are standing up a second source of supply. As these actions deliver results, we expect to improve supply availability and overall fleet readiness,” F-35 program spokesman Mike Friedman said,

“We continue to see improvements in F-35 readiness rates and are receiving positive feedback from our customers, most recently from the Air Force who have several squadrons simultaneously deployed in the Middle East and across Europe for joint exercises and operations,” Friedman added. “Newer F-35 aircraft are averaging greater than 60 percent mission capable rates, with some operational squadrons consistently at or above 70 percent. We’re taking aggressive action across the full F-35 enterprise to achieve the 80 percent mission capable rate target as soon as possible.”UPDATE ENDS

As the SASC noted, former Defense Secretary Jim Mattis ordered the Air Force and Navy to increase mission capable rates for the F-35, F-22, F-16, and F-18 inventories to above 80 percent by the end of September 2019. “What progress,” the committee asked in the written questions, “has the Department made in increasing mission capable rates and decreasing costs for all four platforms?”

The good news for the Air Force is that F-16 rates are better because the service has been able to increase parts supplies and add maintenance shifts. The F-16 fleet is expected to meet the 80 percent goal this year, Esper wrote.

Not so, the F-22. It too faces stealth maintenance issue, made worse, Esper noted, “by the extreme damage at Tyndall Air Force Base from the effects of Hurricane Michael.” The F-22 fleet rates are improving but it probably won’t make 80 percent this year. Oh, and Congress: “Improving mission capable rates for both fleets required additional funding investment for this fiscal year.” 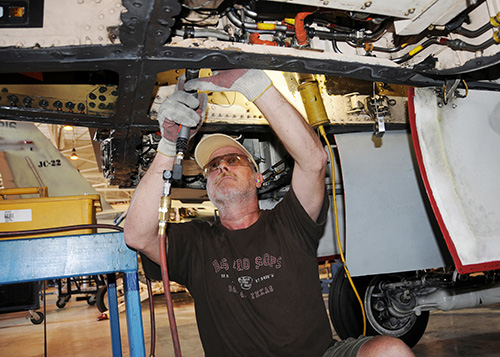 The Navy’s fleet of F-18 is on track to meet the goal by September 2019. The Navy created a Maintenance Operations Center (MOC) to coordinate maintenance activities and optimize resources and reformed its depot and front-line maintenance process, thus improving regular inspections. Among a host of other changes, the Navy implemented supply chain reform that made it easier to track data across multiple sources.

In the meantime, to address the gap in part repair capabilities at the military depots, the prime contractor Boeing has begun incentivizing manufacturers to increase their capacity to repair spare parts by establishing performance-based repair agreements. As of October 2018, according to program documentation, Boeing had established seven such agreements, with six more planned by May 2019.

I contacted Lockheed and the F-35 Joint Program Office for comment and will add it when it arrives.