Posted by Theresa Hitchens on October 1, 2019 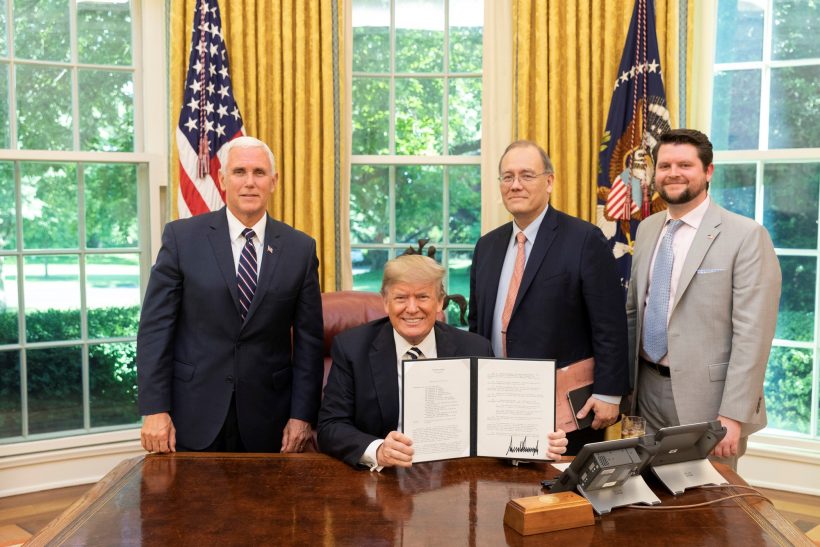 Stressing the need for transatlantic cooperation on space in face of growing threats, Pace subtly urged the EU not to set up space development and procurement projects that would block non-EU NATO allies and the US from participating. Despite his use of diplomatic code, the implicit warning was clear: don’t do this or the Trump Administration will need to react.

There could be, he said, new opportunities for “NATO and the EU to coordinate the development of space capabilities” but only if the EU “properly structured” its own space programs. He quipped: “Note the diplomatic phrasing here.” Pace pointedly praised NATO’s recent approval of a new space policy that will “contribute to collective self-defense against emerging space threats.”

He went on to reiterate recent NATO-EU joint declarations that capabilities developed by each organization should remain “coherent, interoperable” and “available to both organizations.” Perhaps more importantly, he said, those pledges must “encourage the fullest possible involvement of NATO allies that are not members of the EU in the EU’s defense initiatives.” These principles, Pace said, also apply to space programs. (The US, Albania, Canada, Iceland, Norway and Turkey are members of NATO, but not the EU.)

Pace’s comments were delivered as the European Commission plans a confirmation hearing tomorrow for Sylvia Goulard, nominated by France to oversee an ambitious new plan to expand economic and political support for pumping up Europe’s defense and space industry. The plan, which involves creation of a new directorate for space and defense, plus an influx of EU investment, is increasingly drawing Trump Administration fire for what it sees as restrictions on future American company market access.

In her new role, Goulard would be responsible for implementing and overseeing EU space policy, collective investment, and programs — worth a proposed 16 billion Euro ($17.5 billion) between 2021 and 2027. She also would be in charge of  cementing the new 13 billion Euro ($14 billion) European Defence Fund to invest in ‘domestic’ industry, along with the package of defense procurement and development projects gathered under the Permanent Structured Cooperation (PESCO) effort.

Goulard, former deputy governor of the bank of France, was nominated by French President Emmanuel Macron as the next European Commissioner for Internal Market. That position has been revamped by new European Commission chief Ursula von der Leyen to include a new directorate (DG) for “Defence Industry and Space.” (Goulard is expected to be confirmed.)

This is the first time space has been elevated to the purview of a new directorate, explained one EU official. Its placement alongside the defense industry further shows the emphasis Europe is putting on developing its own autonomous space capabilities and a European space industrial base, the official said.

“By seeking synergies and cross-fertilization between space and defence in EU programmes, we aim to use more efficiently resources and technologies, Goulard said in written questions for her hearing obtained by Breaking D. “Space is an important tool for security actors, such as military, police, civil protection, emergency managers, border management actors etc. The existing space programmes Galileo and Copernicus already include security-related services, such as the Copernicus security and emergency services, and in particular the Galileo Public Regulated Service, which can be used by governments for emergency services, peacekeeping operations and crisis management. I will support Member States in increasing the uptake of those services.”

The European Commission is the European Union’s politically independent executive arm. It alone is responsible for drafting new European legislation, and it implements the decisions of the popularly-elected European Parliament, and the EU Council comprising member country heads of state.

Part of the rationale for the new directorate, European officials say, is to find ways to catch up to the increased investment in the United States by both venture capitalists and the Defense Department in the commercial space industry and technology development. Indeed, the European Investment Bank recently issued a study sounding the alarm over inadequate EU space investment and suggesting remedies. This includes “a strengthened European defence policy as a driver for market development across all space business segments.”

According to Goulard’s written testimony, “Under the European Defence Fund, we will continue to identify priorities with a view to improving the crucial link between space and defence and security. This could include Space Situational Awareness and early warning capabilities as well as Positioning, Navigation and Timing and satellite communication capabilities.”

It is the linkage of EU space efforts to its defense industrial policy that has heightened Trump administration concerns. Trump Administration officials have for some time been warning Europe about the possibility of economic retaliation if the rules of the new investment fund are structured so as to limit US company ability to win European contracts.

In particular, the administration has pointed a finger at the fund’s provisions on intellectual property rights and export control. In an April 8 speech to the Clingendael Institute in The Hague, Acting Principal Deputy Assistant Secretary for the Bureau of Europe and Eurasian Affairs Michael Murphy chided that the European Defence Fund’s IP “language is so restrictive that it will effectively discourage any non-EU entity, including subsidiaries of non-EU entities that are located in the EU and employ EU citizens, from participating in EDF-funded defense projects.”

European industrialists are quick to point out that this is a clear case of ‘pots calling kettles black.’

First, the US International Traffic in Arms Regulations (ITAR) — along with political sensitivities in Congress — ensure that European companies have limited opportunities in the US defense and space market. Indeed, European companies wanting to play in any market sector connected to national security in general are forced to create US subsidiaries that hire primarily US personnel in order to deal with the need for security clearances.

And, as Laurent Jaffart, Airbus Defense and Space vice president for business development, told the Atlantic Council, European companies simply cannot expect to ever win US prime contracts.”We would never aspire to be a prime,” he said wryly. (Few Europeans have forgotten how Airbus –known then as EADS — was treated during the tanker wars when it joined with Northrop Grumman.)

Second, the Trump Administration’s space policy includes several initiatives to bolster the US space industry both as a partner for DoD and on the commercial market place, including Space Policy Directives 2 and 3 (SPD-2, SPD-3).

Further, Trump has repeatedly bemoaned the lack of European investment in defense.