Bolton Warns Trump: North Korea ‘Will Never Give Up’ Nukes 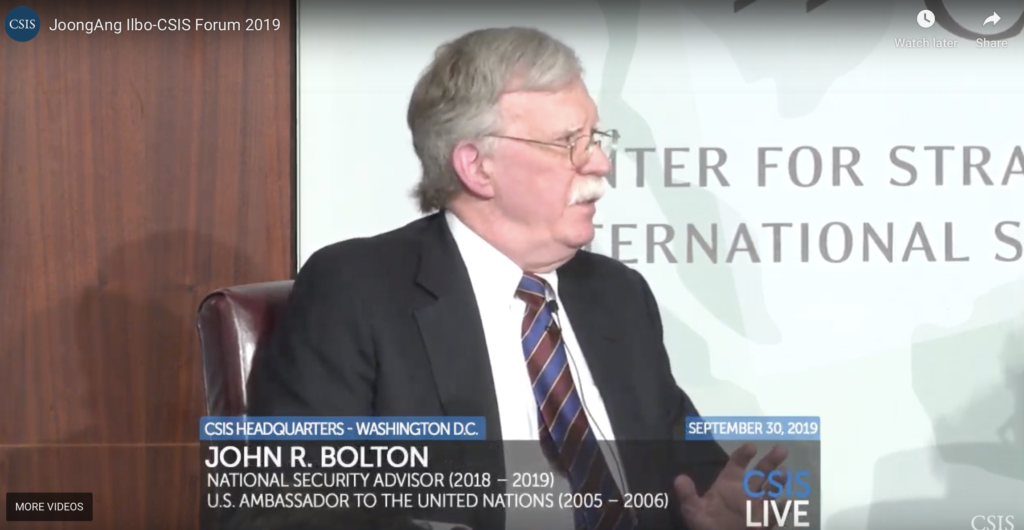 WASHINGTON: Ousted National Security Advisor John Bolton said Kim Jong Un “will never give up” nuclear weapons voluntarily — an implicit warning to his former boss. Bolton was restating a consensus view of the Intelligence Community, one that runs counter to President Trump’s faith that the North Korean dynast can be wheedled and cajoled.

Speaking at the Center for Strategic and International Studies today, Bolton attracted a forest of TV cameras hoping for some fireworks. They probably thought they were getting something hot when Bolton made his comment about North Korea but, as Breaking D readers know, the Intelligence Community’s top expert on North Korea, Markus Garlauskas, said two years ago that Kim “does not intend to negotiate those (nuclear) capabilities away at any price.”

But Bolton also made pretty clear he does not agree with President Trump’s tactics of calling Kim his good friend and of dismissing violations of international law each time the tubby North Korean leader launches a ballistic missile. Bolton noted that time is on Kim’s side, not ours.

“Every day that goes by makes North Korea a more dangerous country,” he said at CSIS. “When does it become too late? Today is better than tomorrow. Tomorrow is better than the next day.”

In perhaps the most telling moment, the highly respected North Korean expert at CSIS, Victor Cha, pressed Bolton on Trump’s “bromance” approach to diplomacy, asking if it was the best way to get to an agreement.

“I’m not going to comment on that,” Bolton said with a piercing glance. “Nice try.”

The bottom line for Kim, Bolton made clear, is that he has made “the strategic decision” to “do whatever he can to keep a deliverable nuclear weapons capability and to develop and enhance it further.”

John Rood, one of the top officials at the Defense Department, spoke later in the day at CSIS and he spoke almost exclusively about the US-South Korean alliance, noting that the State Department has “the lead” in negotiations to denuclearize the Korean Peninsula.

Pressed on whether Bolton was right about whether North Korea would denuclearize, Rood said,  “that’s the very question we’re seeking to answer with the negotiations our president is leading,…Time will tell if we’re successful.”

Several of those speaking at today’s CSIS event raised the issue of the recent rupture between Japan and South Korea. Reflecting deep-seated historic animosities, the two countries have withdrawn from a crucial intelligence-sharing agreement that helped speed the exchange of data on ballistic missile launches, among other things. None of the panelists had any answers to the current rift. In fact, several said they thought the two countries were unlikely to heal the breach any time soon.

The latest rift began when Japan removed South Korea from its “whitelist” of favored trading partners. Several weeks later, South Korea withdrew from the General Security of Military Information Agreement with Japan, signed only in 2016 after years of negotiations.

Bottom line: the Korean Peninsula is in the grip of a complex multi-lateral mess that is unlikely to be fixed soon, short of a fundamental change in the behavior of several of the key players.